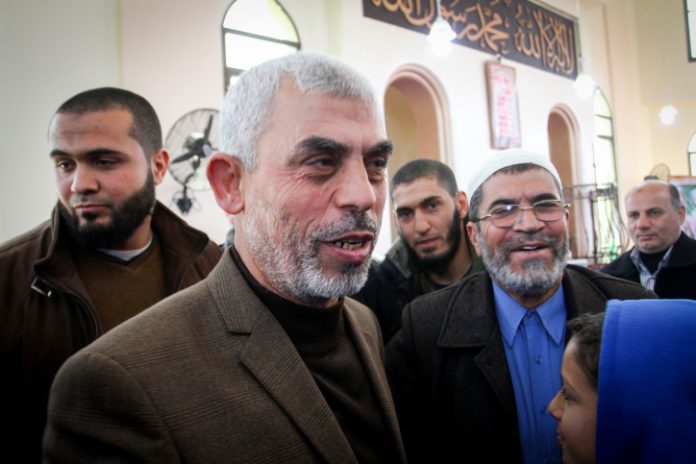 The new leader of Palestinian Hamas based in the Gaza strip said this week that his group has finally restored relations with Iran and is gearing up for future hostilities with Israel.
Yahya Sinwar told reporters that Iran is now “the largest backer financially and militarily” of the Islamist terrorist organisation during his first press conference with journalists since taking up his post in February.
Sinwar said that with Iran’s help, Hamas is accumulating military power in preparation for a battle for “the liberation of Palestine.”
He added Hamas is “developing our military strength in order to liberate Palestine,” but he also stressed that it does not seek war for now “and takes every effort to avoid a war… At the same time, we are not afraid of a war and are ready for it.”
Sinwar also went on to describe the Iranian military support and specifically its renewed relationship with Tehran as “fantastic and returned to its former era.”
Standing in front of a packed room, the terrorist leader confirmed what Israel has known since the end of the 2014 Gaza war which is that Hamas is building missiles and continuing military training. Sinwar added, that “thousands of people are working day and night to prepare for the next conflict.
Iran was once Hamas’s largest backer, but relations cooled after Hamas refused to back Iran’s close ally Syrian President Bashar Assad in his country’s civil war.
But earlier this month, a high-level Hamas delegation travelled to Iran to attend the inauguration of President Hassan Rouhani and subsequent meetings reportedly set up by Hezbollah turned a new page in bilateral relations between Hamas and Tehran.
It seems Iran was keen to restore ties with Hamas after Ismail Haniyeh was elected as head of Hamas’s political bureau and Sinwar as the group’s Gaza chief. Both are considered to be more open to reconciliation with Iran than was Khaled Mashaal, the former political leader of Hamas.
The group is in sore need of funds and backing as its current top patron, Qatar, is under fire from Gulf allies for supporting it.
The Islamist terror group seized Gaza in a near civil war with forces loyal to Palestinian Authority President Mahmoud Abbas in 2007. The two factions have been at loggerheads ever since.
Hamas has fought three wars with Israel since 2008, tunnelling under the border and firing thousands of rockets into Israel. The group is committed to destroying the Jewish state and in response Israel maintains a security blockade on Gaza designed to prevent the terror group from importing weapons.