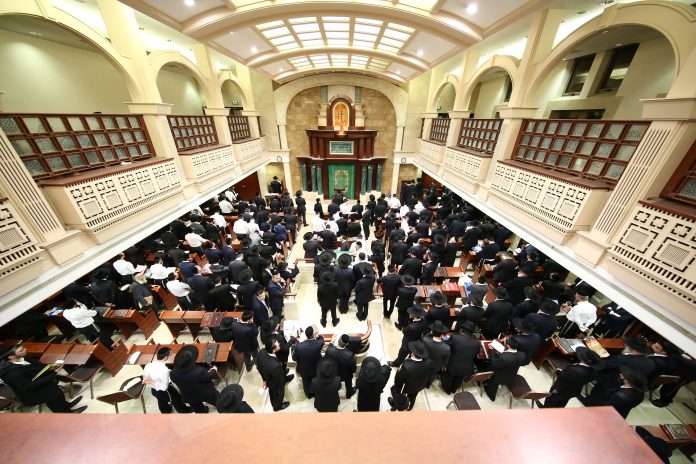 This Purim at least one thousand five hundred Avreichim are expected to once again take part in the Shavuos-Style Purim Kollel on Shushan Purim night. Purim is such a hectic time so it’s tremendously challenging and enormously difficult to disconnect and learn for two whole hours. But for those who have previously experienced it, its immensely rewarding. The atmosphere in the Beis Medrash is electrifying and the ruach is indescribable.
Purim Kollel is a division of The Har Nof Kollel, under the guidance of Maran Harav Chaim Kanievsky shlita and was established to encourage such learning sessions, particularly at times that often tend not to be properly utilized. The Kollel provides its Avreichim with stipends, meat and wine before Yamim Tovim and other special occasions.
It is told about the father of the Avnei Neizer zatza”l, that once, when he studied Torah on Purim, there was no one else in the entire world who was studying Torah at that time and with his study he was mekayem the entire world. It was then revealed to him from Heaven in a dream that in that zechus he would merit a son that would light up the entire world with his Torah. That year, the Avnei Neizer was born.
So many of us are suffering and need yeshuos that we dare not forget the power of Torah learning, specifically on the holy day of Purim. The zechus can break through the gates of Shomayim, allowing our tefillos to reach all the to the Kisei Hakavod.
The Kollel “Adopt-a-Second” campaign encourages generous partners to adopt a few seconds each and distribute tzedaka funds on Purim day to the Avreichim. The generous stipend, distributed on Purim night, makes it that bit easier for the Avreichim to celebrate Purim and helps pay towards the Purim Seuda and other mitzvos hayom. The partners also share the zechus of the Torah learning with a Yissachar Zevulan partnership.
Two hours of learning and then five minutes is dedicated to the inspiring and emotional Tefillos Rabim. It’s hard to imagine the koach of this tefilla which takes place immediately after such an uplifting seder.
Two second partners can submit a name for the tefillas rabbim, fifteen second partners can also submit a name to Maran Reb Chaim Kanievsky shlita. Thirty second partners will receive a bottle of wine from a siyum of Maran Reb Chaim Kanievsky shlita for the Purim seuda.
Reb Chaim Kanievsky shlita said on Tuesday to donors that This is an especially big mitzvah and Bezras Hashem those who will be partners in this mitzvah will be matzliach with everything
The zechus of sanctifying this special day with so much extra Torah and tefilla will surely allow the partners to see yeshuos, each one, where it’s needed. May this Purim be a time of true rejoicing for all Yidden everywhere!
To Partner 03300-432-613 www.purim.partners