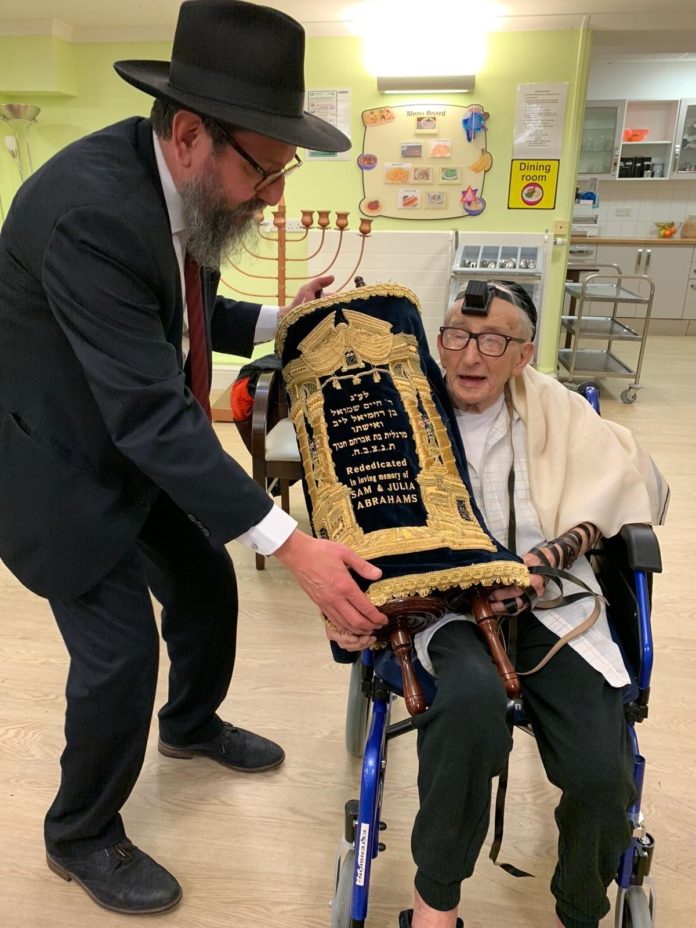 Harry Karker, 96, recently celebrated his third Bar Mitzvah at Jewish Care’s Clore Manor home where he has lived for just over 18 months since moving from his home in Forest Gate. As Judaism considers 70 years to be a full lifetime, men who live beyond that can have a second bar mitzvah from the age of 83 — 13 years into their “second lifetime”.

Harry grew up in Bethnal Green and celebrated his first Bar Mitzvah at Talmud Torah Shul in Teesdale Street in the East End and was able to celebrate his third Bar Mitzvah with his children, grandchildren, friends and residents, staff and volunteers at the home. Jewish Care’s Spiritual and Pastoral Advisor, Rabbi Menachem Junik led the ceremony and Harry, who has always been a regular shul goer, made his Brachot (blessings) whilst everyone sang and wished him Mazel Tov before hearing a sermon from Rabbi Junik and enjoying a celebratory tea.

Harry was delighted with the celebration, saying, “Everything was very, very lovely and enjoyable.” He thanked everyone for coming and for making a really special day possible.

During World War II, Harry served in the Royal Engineers in Belgium, France, Holland and Germany. He was a sapper in the Royal Engineers and was taught how to operate explosives and identify mines. Harry used his skills on the beaches of Normandy in France in 1944. Later on in the war he worked in HQ21 Army Group dealing with office supplies because, as his daughter Sharon Isaac, says, “he had such beautiful handwriting.”

After the War, Harry became a tailor and worked in menswear shops as a manager for many years. He married Myra in 1953 and she sadly passed away nearly two years ago. The couple lived in Forest Gate, East London, all their married life and had their two daughters, Michelle and Sharon who married, Brian and Maurice giving Harry four grandchildren.

Harry’s daughter, Sharon says, “The lovely thing about being at a Jewish Care home was that he could have his third Bar Mitzvah. Dad seemed excited about the idea of saying his Brachot again when we talked about it and likes to be in shul because he used to go every week when we lived in Forest Gate in East London. When he was living at home it wasn’t possible to have a second Bar Mitzvah so this was a really special opportunity for him, he was so pleased to celebrate this Simcha.”

Rabbi Junik said, “What a blessing to be able to celebrate a third Bar Mitzvah at 96. It is very special and was a privilege for me to be present at this Simcha. Many residents felt encouraged, giving them hope and optimism towards reaching the special milestones in their own lives.”