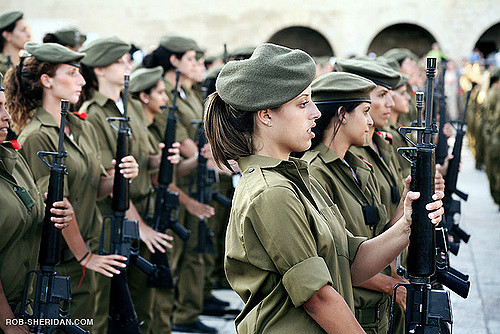 The Hebrew University in Jerusalem has called on students to wear IDF uniform at lectures.

Professor Asher Cohen has backed the “Students in Uniform? Welcome!” campaign after the university faced widespread criticism when a senior lecturer condoned a female student for wearing her IDF uniform to a class.

Dr. Carola Hilfrich of the Faculty of Humanities was filmed on a mobile phone reprimanding the student soldier after an Arab classmate said they were offended by her dress code.

The Hebrew University apologised to the student whilst Dr Hilfrich was lambasted for her actions.

“We wanted to clarify that we respect soldiers in uniform, that is the truth,” said Cohen told Galei Tzahal (Army Radio). “I personally have not talked with Dr. Hilfrich yet, but her behaviour was behaviour that should have not occurred.”

Asked if the professor would be dismissed, an action called for in 45,000 emails initiated by a Zionist organization Im Tirtzu campaign, Cohen said the subject was “on the table”.

Im Tirtzu scheduled a “uniform protest” for students to wear IDF uniforms at the university this week.

“We are pleased to see that after the university nixed the playing of Hatikvah at its graduation ceremony, approved inciting protests against IDF soldiers and petitioned the state on behalf of a BDS activist, they remembered the importance of IDF soldiers,” said Im Tirtzu chief executive Matan Peleg.

“This is a step in the right direction, perhaps there is still hope that the university will change its ways and begin combating the widespread anti-Israel activity on its campus.”

The Hebrew University apologised to the student last week, noting that it honoured all students, including those attending classes during military service whether drafted soldiers, career soldiers or reservists in a statement.