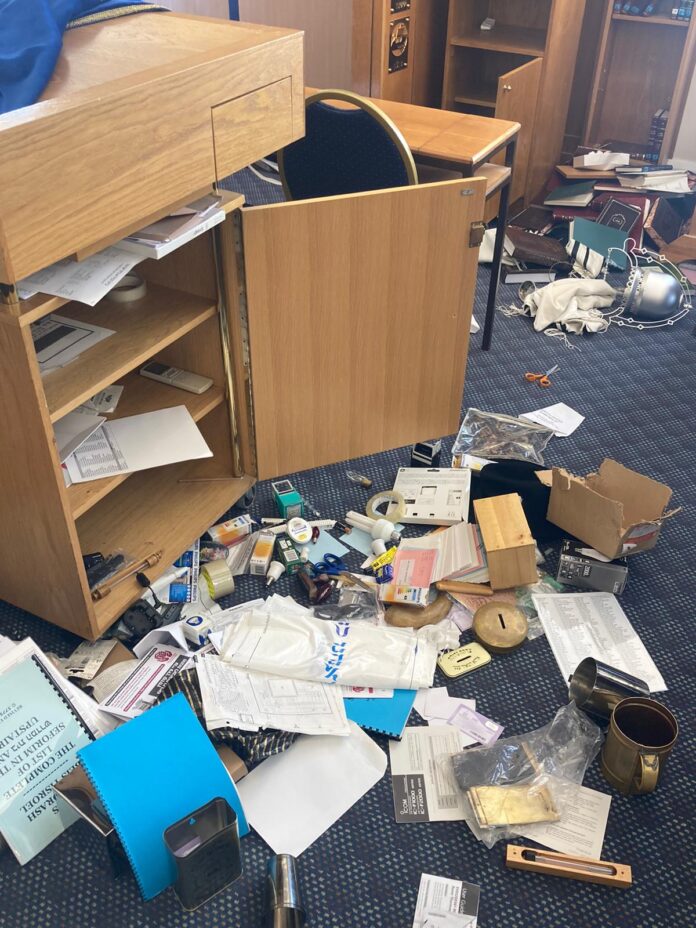 Mispalelim (shul goers) arriving at Dayan Chanoch Ehrentreu’s Beis Hamedrash in Hendon last Shabbos morning, were stunned to discover an overnight break-in, which left seforim and tallisim sprawled all over the floor.

Security cameras later showed two young men gaining access to the building from a neighbouring fence and then pulling themselves up onto the roof, before breaking through one of the windows by removing the frame.

Not only did the thieves spend some 40 minutes on the roof, they were inside the Beis Hamedrash for an hour and 45 minutes, smashing locks off charity boxes and breaking into offices. But despite finding maybe £20 in coins because the boxes had been emptied earlier in the week, the burglars were clearly frustrated they couldn’t find a way into the Aron Kodesh (Ark).

A fair amount of damage was done and when the pair of thieves decided to give up at round 4am, they bolted the front door and left through the upstairs window jumping onto a neighbour’s fence.

Members of the shul eventually found a way into the Beis Hamedrash at 09.30 after trying for 45 minutes. They picked up the seforim, tallisim, teffilin and many spare mezuzah’s thrown onto the floor, while the security guard took care of the electric goods.

About 15 years ago, a number of shul’s in Hendon and Golders Green were hit with a team of professional burglars over a period of 3 months. But the shul known as Beis Yisrael in Shirehall Park, did not believe the two young thieves from last Friday night were part of a professional team.