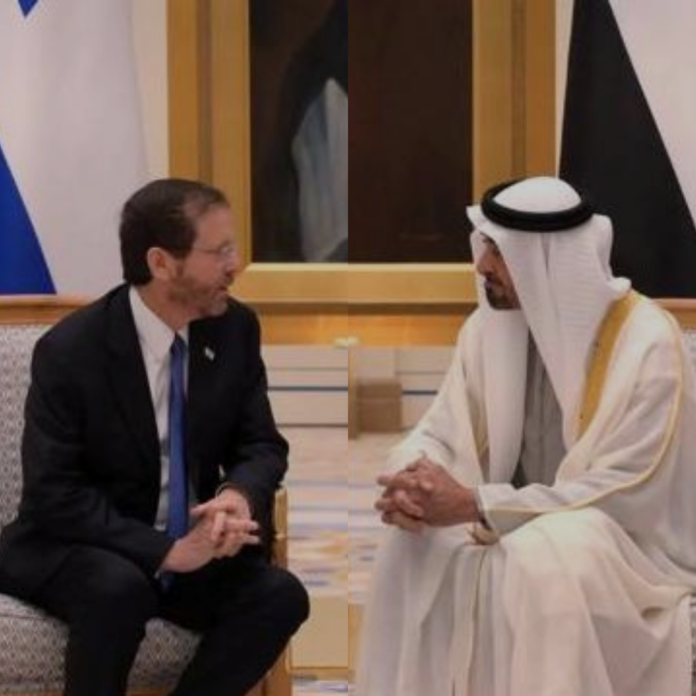 President Isaac Herzog has hailed a historic visit to the United Arab Emirates as one that offers “huge potential” between the two nations.

“We can truly lead the Middle East to a new horizon of peace, prosperity, cooperation and joint investments and development,” he said. “There are only two alternatives for this region. One is peace, prosperity, cooperation and joint investments or alternatively, what Iran is doing, which is destabilising the region and using its proxies to employ terror.” Herzog added, “This visit symbolises hope, peace and a great future for our nations, the region and the world at large.”

During the first state trip by an Israeli president to the UAE, local air defence systems intercepted a ballistic missile fired at Abu Dhabi by the Houthis in Yemen but it did not halt a packed itinerary.

There were no injuries in the overnight missile attack on Sunday. Herzog’s office confirmed “no danger” was posed to the president or delegation. According to the UAE Ministry of Defence, the missile launcher in Yemen was destroyed in a joint operation with coalition forces.

Bicom noted the timing of the third attack by the Houthis against the UAE in recent weeks appeared to coincide with Herzog’s visit. Hours after the strike Herzog spoke at Dubai’s Expo 2020 world fair.

Launching Israel’s national day on Monday, Herzog said the Expo was a “remarkable celebration of each nation’s unique identity” and reminder of what can be achieved by “connecting minds and imagining a different future”.

Explaining the virtues of Israel, Herzog commented, “Israel is a country in which obstacles become opportunities and where the impossible is a tantalising challenge. This pavilion has provided a phenomenal taste of what we have to offer, from water tech and sustainable agriculture to public health, smart cities and ground-breaking solutions for a circular economy. It has also been a stage for the beautiful mosaic of cultures, faiths, music and arts that make up Israel’s vibrant society. And it has been a practical display of cooperation between nations, of the future we can all imagine.”

Turning his attention to the Abraham Accords, Herzog said, “This was a decision not only to normalise ties but to shape a new tomorrow for the next generation of both our nations and of the entire region.”

Trade has topped $1 billion, over 120 agreements have been signed and a $100 million bilateral R&D fund has now been established. Israelis and Emiratis are studying together whilst 250,000 Israelis have visited the Emirates.

Herzog concluded, “The State of Israel is eager to walk with the UAE and all the nations here at the Expo towards a brighter, more sustainable and more peaceful tomorrow, for our nations, our region and the entire world.”

He said, “Israel has much to offer on our global platform. The participation of 192 countries is a testament to the UAE’s efforts to bring the world together into one unified platform in a bid to build bridges, engage in constructive dialogue and develop sustainable solutions to modern-day challenges. We strongly believe that what unites humanity far outweighs what divides it.”

The Minister of Foreign Affairs, Sheikh Abdullah bin Zayed Al Nahyan welcomed Israel’s leader and First Lady when they arrived in Abu Dhabi. During a ceremony, delegations were presented to UAE leaders and Herzog reviewed the royal honour guard, which performed a 21-gun salute in his honour.

Herzog travelled to the royal palace where he met with the Crown Prince and thanked him for his contribution to bilateral relations with Israel.

“We are two successful nations who started with very little in our hands, developed our lands into a successful paradise and in many ways set an example to the world of how to lead and develop a nation with a vision of the future,” he said.

Herzog added that Israel supported the UAE’s security requirements and condemned any attack on its sovereignty by terrorist groups.

The Crown Prince thanked Herzog for Israel’s position regarding recent terrorist attacks on civilian facilities in the UAE. “It is a stance that demonstrates our common view of the threats to regional stability and peace, particularly those posed by militias and terrorist forces,” he said.

“Our relations are moving full steam ahead, there is a common and strong will to strengthen them for the benefit of our countries and peoples,” added the Crown Prince.”

Herzog at a follow-up meeting at the palace surprised the Crown Prince by naming a paediatric medicine conference at the Schneider Medical Center after the Abraham Accords.

Herzog recalled his work with the Jewish Agency Executive and commended the King of Bahrain, White House and Israeli officials who brought about the Abraham Accords.

“We have relations with quite a few Islamic countries and there are plans for other countries, I hope this will bring about a new era in relations between Jews and Muslims in our region,” he said.

Herzog concluded, “I hope to see all of you in Israel, may you continue to go from strength to strength in building the institutions of the community, the education system and of course synagogues and other institutions.”

Herzog’s looked out at the Saudi landscape from the cockpit as the plane flew over Saudi Arabia on route to the UAE. “This is truly a very moving moment”, exclaimed Israel’s president. “We are making history!” added the pilot.