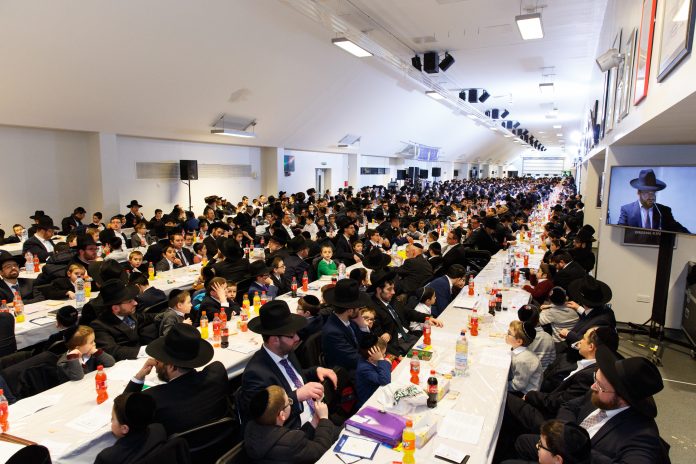 A highly impressive event was held last Motzoei Shabbos, 3rd February, bringing together the Avot uBanim centres of all Charedi shuls in North West London. Attended by 2300 participants the siyum celebrated the learning of the entire 6 volumes of the Mishna under one roof, followed by a celebratory Melave Malka meal.
The evening held at the Allianz Centre in Hendon saw fathers and sons first studying the usual Avot uBanim session before the festive Siyum. The chairman for the evening Rabbi Nechemiah Jaffe of Edgware called on the noted Dayan, Rabbi Dovid Dunner to lead the Tehilim. The Hadran was recited by Yossi Lerner to whose great grandparents Mr and Mrs Zalman Noe the evening was dedicated by their daughter & son in law, Mr & Mrs Sholom Lerner. Kaddish was then said by Mr Sammy Rosenthal in memory of his mother, Mrs Brucha Rosenthal.
In his inimitable style the huge crowd was inspired by the guest speaker, Rabbi Pinchos Schneelbag of Witznitz Yeshiva in Stamford Hill. Younger children who have not yet started learning mishna were kept occupied by a special activity workbook. The older boys were given a specially printed booklet of their alloted Mishnayos and all enjoyed a meal of hot dogs and kugel followed by ice cream. Before benching a short video of the Gateshead Rosh Yeshiva, Rabbi Avrohom Gurwicz giving a pre-recorded message was shown.
The evening which was hailed as a great success by all attendees is sure to remain in the memory for years to come.