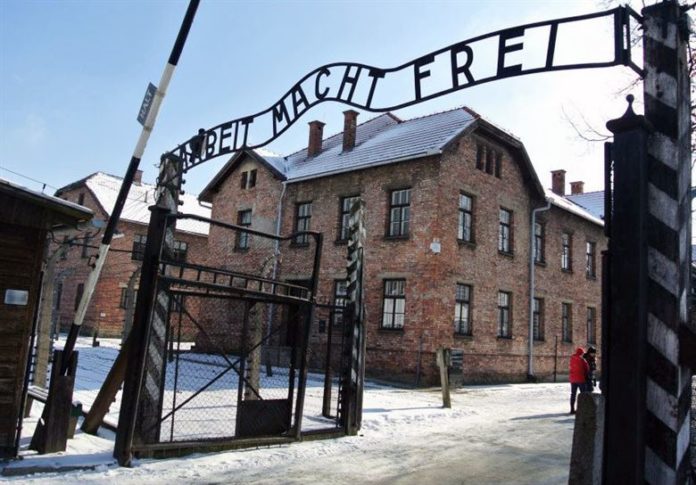 Prince Charles called on people to bear witness to the Shoah as survivor numbers decline for Holocaust Memorial Day yesterday.

National landmarks across Britain including Wembley Stadium, the London Eye and Tyne Bridge were bathed in a purple light to mark last night’s memorial under the theme ‘Be the Light in the Darkness’. A virtual remembrance was streamed online for the first time.

“The last generation of living witnesses is tragically passing from this world, so the task of bearing witness falls to us,” Prince of Wales said, “This is not a task for one time only, nor is it a task for one generation, or one person.  It is for all people, all generations, and all time.  This is our time when we can, each in our own way, be the light that ensures the darkness can never return.”

The ceremony included messages from political and religious leaders, survivors of the Holocaust, genocides in Cambodia, Rwanda, Bosnia and Darfur, celebrities and Premier League footballers.

Johnson met Auschwitz-Birkenau and Bergen-Belsen survivor Renee Salt and World War Two veteran Ian Forsyth who was one the first to arrive at Bergen-Belsen as it was liberated.

“It’s so vital that you both have had the courage to continue to share with everybody, with me and the world, your memories of what took place,” Johnson said. “We can never forget it. Your personal memories have been perhaps the most powerful things I’ve ever heard. What you saw and experienced is horrifying and we must make sure nothing like that happens again.”

Renee recalled being separated from her father at Auschwitz as part of Josef Mengele’s selection process and cramped conditions.

“The hut was already overcrowded before we got in,” she said. “We had to sit against the wall, five in a column packed like sardines. In this position we sat day and night.”

Forsyth recalled, “I still dream about what happened on that day,” he said, “You wouldn’t have believed what we saw.”

The annual event coincided with the day Auschwitz was liberated by the Red Army.

“Today many of Europe’s remaining 1.6 million Jews are descendants of Holocaust survivors but Europe is at crossroads, testing its resilience and values,” said Chief Rabbi Goldschmidt, who noted at the end of World War Two, a large proportion of Holocaust survivors felt that there was no Jewish future in Europe.

He added, “More and more countries are in the process of legislating new restrictions against the Jewish community of Europe, curtailing the freedom of faith Jews have enjoyed in Europe for most of a millennium.”

Pointing out a prohibition against kosher slaughter in Wallonia and Flanders, and Scandinavian and Finish citizens calling to ban circumcision, the Chief Rabbi said legislation against religion in Europe must stop. “If the freedom of religion will not be guaranteed in Europe, the descendants of the 1.6 million Jews in Europe will have great difficulty in making Europe their home and believing in a secure Jewish future,” he concluded,

Speaking at yesterday’s HMD ceremony, he noted, “The passage of time means we have to look at these events with the force of reason and without the precious help of those who experienced the devastation, the ferocity, and the ruinous force of the nationalist devil. But we must also remember that those who experienced that horror have left democratic and European institutions in our custody.

“Europe itself was born as a symbol of openness, cooperation, awareness of a common destiny. It was born from a great vision, from a courageous ideal that drew strength from such a huge tragedy as the one caused by the Second World War and the horrific Nazi designs. This is why all of us Europeans must share responsibility for that custody: the custody of democracy and Europe.

“Holocaust Remembrance Day is not just an anniversary, above all it is an invitation to show our commitment, vigilance and responsibility. To prevent denial and amnesia, we must all make this commitment to a clear and vigilant historical memory, capable not only of bearing witness but also of understanding, preventing, and intervening whenever the seeds of absolute evil spread.”

Amazon removed 92 works of Holocaust denial in multiple languages for sale after dialogue with World Jewish Congress and the Board of Deputies in advance of HMD.

The items have been removed from Amazon UK and 17 localities where Amazon operates.

Over 850 links to Amazon’s websites have also been removed.

The Board and WJC in a joint statement welcomed Amazon’s decision.

“Holocaust denial is unequivocally anti-Semitic, it claims that the Holocaust was fabricated and that therefore, Jews are lying to advance some nefarious agenda,” they noted.

The Board and WJC have called on publishers, booksellers and distributors to follow Amazon’s example.

WJC, meantime, launched its fifth annual ‘We Remember Campaignn to combat anti-Semitism and all forms of hatred, genocide and xenophobia. The campaign promotes Holocaust education.

“As eye-witness memories of the Holocaust fade, and as our world has confronted the Covid-19 pandemic, we are seeing rising levels of anti-Semitism, xenophobia, racist ideologies and Holocaust denial,” said WJC President Ambassador Ronald S. Lauder. “We must heed the horrific lessons of the past and learn from and share the stories of Holocaust survivors to honour the memory of the six million Jews the Nazis killed and ensure today’s escalation of hatred does not become a repetition of those atrocities.

In other initiatives, March of the Living UK and the London School of Jewish Studies presented an online event that included a walk through the Jewish Historical Institute in Warsaw with Dr. Samuel Kassow along with a sessions by MOTL educators.

Action Against Discrimination called on relevant authorities of the need to rid football of anti-Semitism as HMD remembers the six million Jews who perished in the Holocaust.

AAD chairman Jonathan Metliss said, “Seventy–six years after the Holocaust, anti-Semitism in English and European football continues. Hissing noises mimicking the gas chambers at football matches, aggressive responses to chanting and use of the word ‘Yid’ have not disappeared. We call on relevant football authorities, football clubs, police and politicians to do their upmost to prevent the continuation of this unacceptable and vile behaviour.”

Metliss added, “The Holocaust reminds us of the deprivation of our basic civil liberties and freedoms. The experiences and memories of the Holocaust must not be forgotten and anti-Semitism in football must be eradicated once and for all.”

Sir Nicholas Winton’s statue at Maidenhead Station was illuminated by 669 candles to represent the children rescued Prague prior to World War Two.

Synagogues throughout the country ran virtual events for congregants.