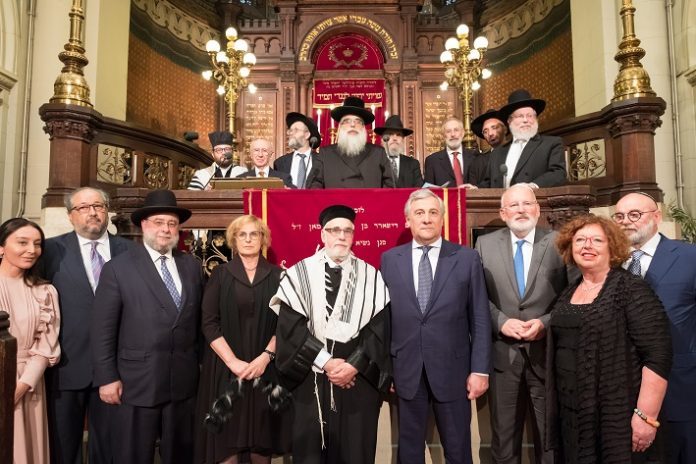 Upon receipt of his prize, First Vice-President of the European Commission Frans Timmermans, spoke passionately, without notes and from the heart about the Jewish community’s place in Europe, saying, “I will always be there for you, I will always defend your rights and I will always stand by you.” Describing antisemitism as a virus that never goes away he went on to say “The souls of so many cities were torn out during the Shoah but the attitude of the Jewish community is the ultimate triumph over Hitler and his henchman. This our common quest, this is the Europe we want to be a part of.“

During his speech, President Tajani, spoke at length about the importance of the Jewish community in Europe, reiterating his commitment to religious freedom and religious practice.

At the same ceremony, Lithuanian novelist Ruta Vanagaite was awarded the Rabbi Moshe Rosen Prize, in recognition of her service to Holocaust remembrance through her novels which have challenged conventional understanding of the Lithuanian nation’s treatment of Jews during World War II. This prize was previously awarded former French President Nicolas Sarkozy.

During his speech to Commissioner Timmermans, Rabbi Goldschmidt warned against ‘the sinister undercurrent [of hate] in society that many of us hoped was consigned to the past’ and his appreciation that ‘Commissioner Timmermans and others at European level continue to protect our rights,’ especially at a time when ‘religious practice has … come under threat.’ Rabbi Goldschmidt continued his speech by expressing his desire for the religious leadership to remain strong and vocal in the face of political attacks on religious practice.