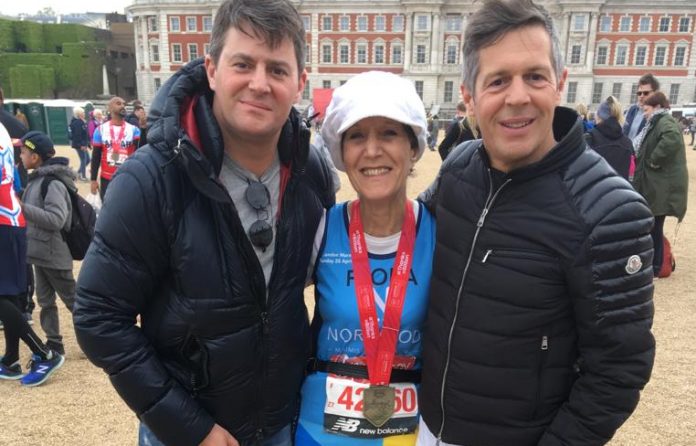 Jewish runners were among a record number of competitors to complete the 26.2 mile Virgin Money London marathon last Sunday.

Over 40,000 racers took in the party atmosphere whether they ran seriously, jogged or walked the distance all for charity cheered on by family, friends and staff members.

And 76-year-old great-grandma Flora Frank, just over a month after coming first in her age group at the Jerusalem marathon, completed her 37th marathon, power-walking under the Norwood banner and also donating to Emunah.

Finishing in six hours 50 minutes, Flora, who participates in memory of her husband Herbert, brother Nissim, who lived at Ravenswood Village, and Daniel Sacks, is an inspiration to many.

She has completed an astonishing 21 London marathons, 2 New York, 10 Tiberias, 4 Jerusalem in addition to two Jerusalem half marathons.“I came back from Israel especially for the marathon and it was really worth it,” she said.

“The marathon went very well. The weather was amazing. I was very worried this year but got through. I do not take credit for anything I do, it is all from Hashem.”

“Flora is an icon and all at Norwood are indebted to her for her efforts and support,” said Dr Beverley Jacobson, CEO of Norwood. Lynda Dullop, CEO of British Emunah, added, “Flora is truly inspirational and we are grateful for her support of Emunah welfare projects in Israel.”

Funds fund professional and expert services for the Jewish community affected by a cancer diagnosis.

Chai has supported two of her grandparents and was key to getting them back on their feet.

Following the marathon, she said, “Running the marathon was an incredible once in a lifetime experience. Seeing friends and family in the crowds along with complete strangers cheering your name motivated me so much to push that little bit more and reach the finish line.”

“Two and a half years ago my wife, Larissa was diagnosed with breast cancer and thanks to the help of the people at Chai, who offered constant support in treatments, therapy and mentoring,” he said.

Donna Bengio completed the course in five hours. She has raised over £3,500 so far.

“Chai has been an organisation I always seek to help not only because of how much they help people affected by cancer, but also by their general positive energy,” she noted.

“After running the marathon again for Chai, I have learnt that however hard and tough it was at times, it is by far not even a comparison to the dedication, amazing and also very difficult work Chai provides for our community.”

“Chai has helped a family very close to me and I wanted to be able to support them doing that for others,” she said. “I never appreciated the impact of running for a charity could have on training but through those tough and grueling runs people’s generosity keeps you going.”

And Nathan Djanogly completed the challenge in 4:52 and has raised an inspiring £4,768.

Chai has supported his aunt following a cancer diagnosis.

“I’d like to thank all our runners for their commitment and dedication over the many months of training and through all their efforts. Chai can continue to be there for all those who turn to us. The Community continue to ‘run by our side’!”

Norwood had 15 runners competing who so far have raised in excess of £30,000. But the total will be closer to £40,000 when sponsorship pledges are realised over the coming days.Funds raised will enable Norwood to continue to provide vital services to over 4,000 people annually.

Second time London racer Richard Rule, 53, was fastest arriving at The Mall in a personal best time of 3:23 and found this year’s event particularly special.

“The crowd were just brilliant this year,” an emotional Richard said at the finish line. “They, and the fact that I was doing it for such a fantastic charity, really kept me going. I ran because everybody, regardless of their circumstances, should be given a chance and that is precisely what Norwood stands for.”For Dom Coleman, 23, the decision to run for Norwood was deeply personal after watching the event last year.

“Norwood is an amazing charity with a strong family connection, in fact, it has been an integral part of my family’s life for more than 25 years,” he said. “My 27-year-old cousin Max became profoundly disabled following an illness in infancy. He has cerebral palsy which is often life-limiting, but has exceeded all medical assessments and continues to live life to the full. Norwood has been there every stage of his life, providing emotional and tangible support throughout his life.”Dom completed the marathon in around four hours and although “absolutely exhausted”, summed up the experience as “ridiculous.” And Borehamwood shul member Any Da Costa finished in just over six hours raising over £3,800.

Team Emunah will also be represented in 12 months, and this time around hope to raise £15,000 thanks to nine runners pounding the streets of London.

Emunah’s fastest runner was George Jackson, finishing in 3:19, having also completed the Brighton marathon in April. His brother, Marc, achieved a personal best, finishing in 3:56.

“It was tough, but a great experience,” he said.First-time marathon runner Martin Bleaken was “proud and relieved” to complete the race in 3:32.

Other first-time runners fared well with Edward Bunce finishing in 4:27, feeling “glad to cross the finish line and to have raised money in the process.”Ben Cox finished in 5:35, declaring, “I’ve finally done it, there’s nothing like finishing the marathon.” Meanwhile, Matt Rickard finished in 5:19, stating, “I was very happy with my pace then heading towards Canary Wharf it got harder. The marathon was a fabulous experience, one that I will never forget.”Dr Gillian Gertner achieved a personal best 4:44, describing the marathon as “totally brilliant, an amazing, awesome event.” And Claire Gothelf’s ran her fourth marathon for Emunah was in memory of Hazel Jackson, treasurer of Leeds Tzvia Goren Emunah.

Claire added, “I felt proud at the finish, I was crying with emotion. As you go down The Mall, past Buckingham Palace, the crowds are amazing. London knows how to put on a show!”

“We are so truly grateful to all of our runners whose fantastic marathon achievements will help to support at-risk children in Israel,” comments British Emunah CEO Lynda Dullop.

Runners had close connections with the charity and three runners were running their second marathon.

Michele Lobl’s family have a long-standing connection with the charity.

When her father, Benjamin Morgenstern, was diagnosed with dementia, the Social Work and Community Support team were there for Norma, Michele’s mother and family.

Benjamin stayed at Jewish Care’s home in Hendon for respite care and sadly passed away in 2002.

17 years later, Michele’s mum, Norma, who is 92, is a resident at Lady Sarah Cohen House.

“Norma has always been a feisty, stoic and independent lady, loving her cooking, baking and voluntary work,” said Michele. “Now with our own family crisis it seemed the least I could do to try and raise additional funding to support families who like us have Jewish Care to thank for supporting their loved ones at their most vulnerable times in their lives to ensure care and dignity at the end of their lives.”

“Every pound sponsored means a lot to me and kept me moving forwards through each mile in the knowledge that families in a similar situation to ours will benefit.”

After the marathon Rikki Lewis, 32, said, “The feeling of pain and body destruction has been pushed aside by an enormous sense of pride and achievement. It was an absolute privilege taking part in the race for Jewish Care, which undoubtedly pushed me over the finish line.”

Marc Cohen, 34, added, “Coming up to Tower Bridge, I’d pulled a muscle but it was well worth the pain and support from the crowd. People donating to Jewish Care really kept me going.

“I was a regular at Redbridge Jewish Community Centre as a teenager and could see how Jewish Care looked after older people in Essex. My dad helped with Meals on Wheels service and I know how the team work with older members of the community to live independently with support.”

Matt Caplin, 40, commented, “It was an amazing experience and no other race compares to the London marathon. My grandpa and family friends were residents in a Jewish Care home so I’m really pleased to be able to run for the organisation which does such a lot for our community.”

“It was a great atmosphere and I enjoyed cheering them,” he said. “Each runner has their own inspiring story about what motivated them to take on this huge challenge.”

Kisharon’s runners have so far raised over £16,000 for the charity and more continues to be pledged.

Among participants, Alison Morley, who finished in 4:44, decided to train for her first marathon, having turned 40 this year. Cherie Diamond, completed the run in 4:49, she ran her first ever marathon, travelling from South Africa to run the marathon for the charity.And Linda Lazarus, who finished in 6:54, committed to training nine months ago for what she describes as her first and last marathon!

Linda chose to run for Kisharon having spent the majority of her teaching career working with children with special educational needs.