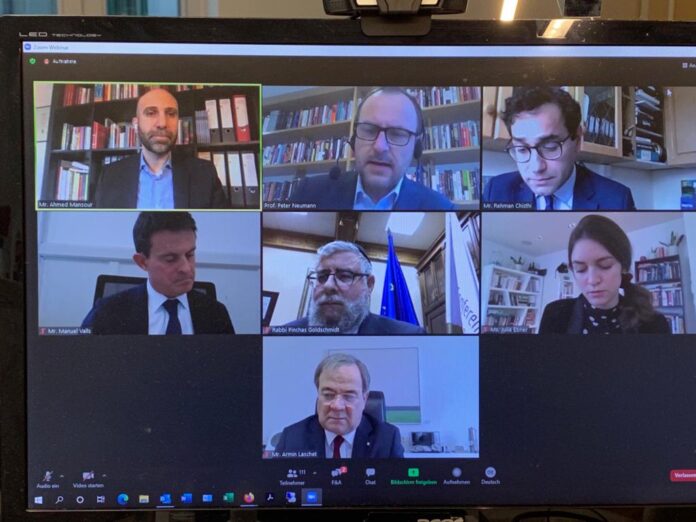 The newly founded Institute for Freedom of Faith and Security in Europe (IFFSE), initiated by the Conference of European Rabbis (CER), hosted its initial virtual meeting on Friday, kicking off a series of debating new ideas with Europe’s leading thinkers and policymakers for combating religious extremism and terrorism in Europe.

The discussion took place against the background of the recent Islamist attacks in Paris, Nice, Vienna and Dresden and included high-level speakers from across Europe.

In the online discussion of the Institute for Freedom of Faith & Security in Europe moderated by the prestigious security expert Peter Neumann, from King’s College London. During the session former French Prime Minister Manuel Valls spoke out in favour of creating a “European Islam”. “The idea is to sever ties with the countries of origin,” Valls said on Friday. The undertaking is certainly not easy, he said, and will take decades but is “unavoidable”. Valls supported the Head of State Emmanuel Macron’s plan to allow and certify the training of imams only in Europe. He called, for example, the financing of Islamic communities from Qatar “a danger”. He also pointed out that Turkish President Recep Tayyip Erdogan wanted to exercise control over Islam.

North Rhine-Westphalia’s Minister President Armin Laschet said that, in the tradition of France, there is a strict separation between church and state. In Germany, he said, the state could not so easily ban church services. Before Erdogan, Turkey had also been a secular state. In individual cases, Erdogan had brought Turkish domestic politics, such as the fight against the Gülen movement, into mosques. But this had to be differentiated from Wahabism and Salafism in other Islamic communities. During the debate, Armin Laschet called for more European cooperation to curb Islamist extremism. “This is a struggle that we can only fight together as Europeans. It is not a national issue”, he said.

The Austrian Minister for Integration and Women, Susanne Raab said that Europeans must tackle the challenge of terrorism and religious extremism together. This is not a fight against Muslims or migrants. Religious extremism such as political Islam seeks to divide society. They are not attacks on individuals, but “on our democratic principles and values”.

“Those who only fight extremists when they become terrorists have lost,” warned the German expert on Islamism, Ahmed Mansour. Jihadists are only the tip of the iceberg, he said; you have to find the spiritual instigators. In recent years, Europe has learnt a lot in terms of security concepts, deradicalization and prevention. But there is still a lack of European and global cooperation between the authorities, “the flow of communication must be improved”. Mansour said it is not only a matter of distancing oneself from violence, but also of educating people about democracy. This has to do with maturity, the ability to endure discourse, freedom of opinion, victim roles and images of the enemy. This is “a huge task for Muslims” who need support from the government.

Extremism expert Julia Ebner of the Institute for Strategic Dialogue (ISD) said that the attack in Vienna had shown that prison did not help integration. During the coronavirus pandemic, integration had become even more difficult. On a separate topic, the influence of radicalisation in online spaces is growing massively. “The identity crisis is the lowest common denominator of radicalised jihadists and also of right-wingers,” said Ebner. At the same time, Muslims should not generally be driven into a corner, he said, and one should approach the community.

The president of the CER, Chief Rabbi Pinchas Goldschmidt, also referred to a manifesto of the Conference of European Rabbis published in 2015 and renewed the demand that the training of religious leaders must in future take place in Europe and be certified according to a strict catalogue of criteria, including the obligation to show loyalty to the laws in force individual countries, to profess peace and tolerance and to communicate this to their communities.

Member of the British House of Commons and former Special Envoy for Freedom of Religion and Belief, Rehman Chishti, agreed with Rabbi Goldschmidt and pleaded for more financial transparency in mosque communities. He said that due to strict regulations, the UK has already had good experience in this area and that more discussions in Europe about these practical experiences is needed. Rehman Chishti also said that every religious leader is called upon to expose attempts to abuse God for crimes.