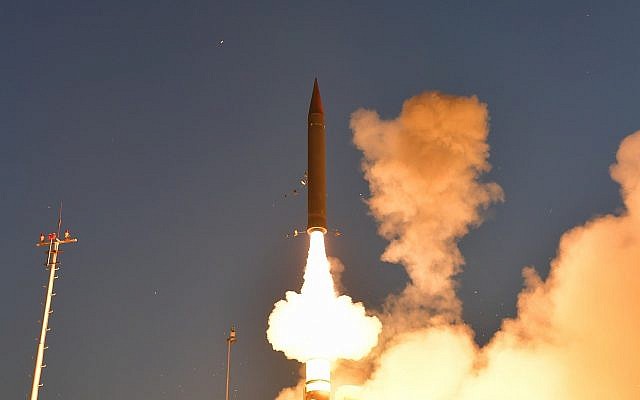 The Israel Missile Defence Organisation has conducted a successful test flight of the Arrow Weapon System and Arrow 3 interceptor, which is designed to intercept ballistic missiles outside of earth’s atmosphere.

The test was performed at a test site in central Israel and led by Israel Aerospace Industries.

AWS operational radars detected the target and transferred data to the battle management before establishing a defence plan. Arrow-3 interceptors were then launched toward the target and successfully completed the mission.

Defense Minister Benny Gantz commended the successful outcome of the flight test. “Israel’s defence establishment and industries continue to develop some of the world’s most advanced systems,” he said. “With every step forward, with every development, we equip the State of Israel with the capabilities to defend itself against developing threats. Our systems provide Israel with the freedom to manoeuvre strategically.”

IMDO coordinated the test with Israel’s Ministry of Defence, US Missile Defence Agency and Israeli Defence Forces. Representatives of the IMDA, MDA, IAF and industries involved in AWS development participated in the test.

“This test was designed to challenge every element of the Arrow Weapon System and it performed beautifully,” said MDA Director Vice Adm. Jon Hill. “Data collected from this test guide future development of the AWS. MDA remains committed to assisting the Government of Israel in upgrading its missile defence capability against current and emerging threats.”

Chief of the IDF General Staff, Lt. Gen. Aviv Kohavi commented, “The IDF and Israel’s defence establishment see great importance in constantly upgrading and improving our air defence capabilities. The test conducted is another element in our ability to respond to developing threats in the region and is a part of the implementation of the IDF&#39;s multi-year plan.”

BOEING, TOMER and RAFAEL are the main subcontractors for the development and production of the Arrow 3 interceptor. RAFAEL designs and develops the target.

Boaz Levy, IAI, commented, “The Arrow System proved once again that Israel holds one of the world’s most advanced defence systems against ballistic missiles. Throughout the flight test, the system was tested against ‘future threats’, in a challenging scenario, while gathering essential information that will be used by the defence establishment and the company’s engineers for the development of future technologies. The Arrow System is one of IAI’s advanced developments, including cutting-edge technologies with the capability of identifying and intercepting surrounding threats”

The AWS is a central part of Israel’s defence array that includes the Iron Dome Defense System and David’s Sling Weapon System.

This test is part of the IDF’s multi-year development program. Its success is an important milestone for Israel’s operational capability to defend itself.