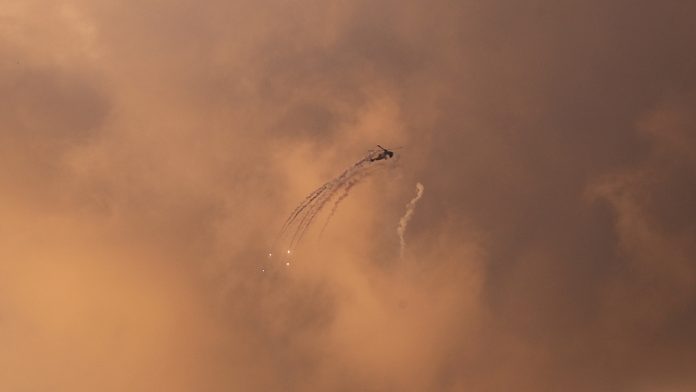 Israeli aircraft hit targets overnight into Tuesday while Gaza militants fired over 100 missiles into southern Israel as tensions on the Gaza Strip once again increased.

No Israeli casualties were reported.

An Egyptian-mediated ceasefire was disputed by Israeli officials but an unofficial cease-fire held overnight into Wednesday aside from spasmodic exchanges of fire.

There were no reports of casualties as both Israel and Hamas appeared set to step back from a full-fledged confrontation with Israeli elections less than two weeks away.

However, a tense situation remains with Israel ready to strike hard.

The IDF have strengthened forces along the Gaza border if required and there is speculation violence might erupt when Hamas marks the first anniversary of March of Return riots with reportedly large protests.

Israeli communities near the border and in southern cities reopened schools following advice from the Home Front Command on Wednesday after being closed during the three-day hostilities.

The spark for violence came after a missile fired from Gaza destroyed the home of a British-Israeli family at Moshav Mishmeret in central Israel in the early hours of Monday.

Robert and Susan Wolf made Aliyah 30 years ago, Susan was among those treated by Magen David Adom and transported to Meir Hospital in Kfar Sava.

Prime Minister Benjamin Netanyahu was in Washington at the time witnessing US President Donald Trump sign a declaration at the White House recognising Israel’s sovereignty over the Golan Heights.

Following the ceremony, Netanyahu cut short his trip and to return swiftly to Israel.

Speaking from the White House prior to his departure, he said Israel would protect its citizens.

He added, “Hamas needs to know that we will not hesitate to go in and take all necessary steps, regardless of anything, any date, other than Israel’s security needs.”

“The despicable attack (near Tel Aviv) demonstrates the significant security challenges that Israel faces every single day,” he added. “Israel is entitled to have a very strong national security.”

On his return to Israel on Tuesday morning, Netanyahu held meetings at the Defense Ministry headquarters in Tel Aviv and made it clear that Israel was “prepared to do a lot more”.

Addressing the annual AIPAC conference in Washington, the US’s biggest pro-Israel lobby via satellite, Netanyahu, who was been due to speak, reiterated his earlier message that Israel would do whatever is necessary to defend its people and defend the State.

US Vice President Mike Pence said the rocket attack proved Hamas was not a partner for peace. “Hamas is a terrorist organisation that seeks the destruction of Israel, and the United States will never negotiate with terrorist Hamas,” he noted.

Trump’s special envoy to the Middle East, Jason Greenblatt, noted on Twitter, “We condemn this violence from Gaza & affirm Israel’s right to defend itself.”

“We are just at the beginning,” said IDF spokesman Brig. Gen. Ronen Manelis as the response began.

“Hamas understands this is a significant strike (following) a serious incident, and ultimately, this is a price that Hamas has been accruing for the past year.”

Israel’s military confirmed the locally made rocket had a range of 75 miles.

The IDF mobilised two armour and infantry brigades on the Gaza border and called up reservists and intelligence units in preparation to respond forcefully. Troops were also deployed in southern Israel.

IDF Spokesman Ronen Manelis told reporters at a press briefing the rocket was fired from the Rafah area of southern Gaza.

“Rocket fire was carried out by Hamas from a Hamas position,” he explained. “We see Hamas as being responsible for everything that happens in the Gaza Strip.”

Questioned why the rocket was not intercepted by Israel’s Iron Dome defense system, Manelis said it protected areas where it was stationed according to operational situation assessments.

He added, “The IDF is improving its readiness for a variety of scenarios.

“This is a serious incident of a direct hit on a house in central Israel and follows a series of incidents. The deployment is also offensive, not just reactive.”

Jewish leaders around the world condemned the attack.

“Militants in the Gaza Strip are taking a free hand to callously escalate violence against Israel, completely unprovoked and in violation of international norms,” he said. “WJC holds Hamas responsible for every attack that emanates from its territory and strongly underscores that Israel reserves the full right to defend itself and its citizens against all aggression.”He added, “Our thoughts are with the victims of this attack, who miraculously survived despite a direct hit on their home. It is inconceivable residents and citizens of Israel should have to live in fear for their lives and property.

“Hamas is a terrorist organisation that exploits the lives of innocent civilians in its boundless quest to terrify Israelis and destroy the State of Israel. It is high time that the international community recognise Hamas for what it is and condemn it in the strongest terms possible.

Board of Deputies President Marie van der Zyl reacted with horror to the rocket attack.“Our commitment to the State of Israel’s right to defend its borders and civilians is resolute,” she said.

Politically, Hamas are under increasing pressure in Gaza with an unemployment rate over 50 percent.

The terror group has held weekly protests on the Israeli border for 12 months in efforts to ease the blockade, but 190 people have been killed by Israeli retaliation to rocket fire.