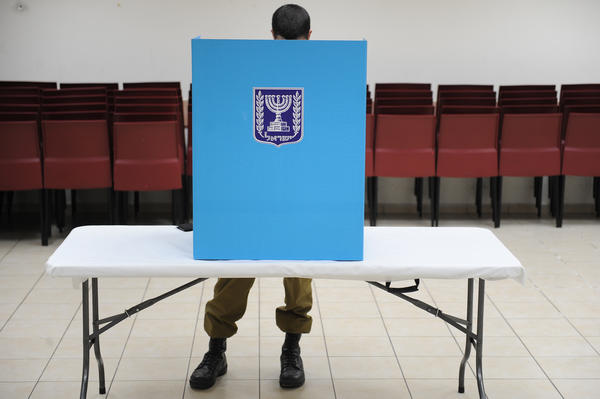 Covering our exclusive Israeli Election Special for The Jewish Weekly is JAMES MARLOW with his report, news briefs and this week’s poll numbers.

Despite several mergers within hours of the close of registration of political factions with the Central Elections Commission last Thursday, a record 47 parties will run for Knesset on 9 April. Lists submitted include the Pirate Party, the Simply Love Party and the new Ki Party led by Rafi Levengrond, the father of murder victim Kim Levengrond Yehezkel. In addition there is The Bible Bloc Party (Gush Hatanachi), which consists of a Jewish-Christian bible group seeking support from Christian Arabs.

Also running is Semion Grafman with his new party called Bitachon Hevrati. Grafman spent a year in a US federal prison for involvement in money laundering and insurance fraud. Ironically, his list of policies include, “fighting corruption.”

Most of these have no prospect of earning enough votes to clear the 3.25% threshold, but Grafman may stand a slightly better chance because he is an internet celebrity and headline grabber. However his choice of letters representing the party on the ballot slip suggests a certain type of character. He will use the Hebrew letters פק, which read in English as f**k. When presenting his registration to Justice Hanan Melcer, who heads the Central Elections Committee, it was reported he said to him, “It’s F**k,” and “It sounds better in English.”

Although 47 parties did submit their registrations before the deadline, several are expected to drop out before the election for a variety of reasons. Achi Yisraeli, the chareidi women’s party, became the first on Tuesday night. In an effort to avoid media attention about the party’s failure, it confirmed by press release at 10.30pm that it will not run.

The Achi Yisraeli statement read: “In light of the political reality that has become apparent in recent days and out of responsibility to the voters, the party’s council decided not to run in the election. Achi Yisraeli will continue to promote its values, especially respectful, unifying discourse on the disagreements in Israeli society.”

However, sources told The Jerusalem Post that the party ran out of money and did not have a budget to produce adverts for the 7 minutes of allocated television time and 14 minutes of radio time. This is the minimum a party that has no Knesset members receives for its political messages.

Founded by Adina Bar-Shalom who is the eldest child of the late Halachic authority and former mentor, Rabbi Ovadia Yosef, Achi Yisraeli promoted an inclusive message that was at odds with that of Shas leader Arye Deri. Her party’s platform permits, public transportation on Shabbat and respect for the LGBT community.

Parties other than Shas did sought Bar-Shalom as a candidate for more than a decade. In the past few weeks, Bar-Shalom received offers to join factions across the political spectrum, but she declined because none offered realistic slots for the other leading figures in Achi Yisraeli.

Her party co-founder, Yeroham mayor Michael Biton left one day before the election was announced to join Benny Gantz and his Israel Resilience Party which is now Blue and White.

Gantz also wanted Bar-Shalom to come on board at the time and she would have been the party’s top female candidate. But sources said that former IDF spokeswoman Ruth Yaron, insisted that Bar-Shalom runs independently and persuaded her not to accept the offers.

There is another party called Achi that is running in the election, together with the Likud. Current deputy defence minister Eli Ben-Dahan is 28th on the Likud list as a representative of Achi, which was founded by former National Religious Party leader Effi Eitam.

In what maybe a first in Israel, Yisrael Beiteinu, Kulanu, Shas, United Torah Judaism, the New Right party led by Naftali Bennett and the United Rightwhich consists of the merger between Jewish Home, National Union and the far right Otzmah Yehudit, have all declared, well in advance, they will recommend Binyamin Netanyahu to form the next government. When the full results are known, the President of Israel meets with the heads of each party asking them who they think should be given the task of forming the next government.

This is likely to create a massive challenge for the new Blue and White party which is leading in all polls, but is unlikely to be successful in putting together a coalition, unless they are willing to join a Likud led government. But Netanyahu is unlikely to dump his traditional alliances with the religious and right parties in favour of possible Shabbat transportation, selective Yeshiva study and secular weddings.

• Naftali Bennett from the New Right Party accused the US President of “planning a Palestinian state right over our heads,” and called on him to release his closely guarded Middle East peace plan before Israel’s April elections. ‎‏”We all know the deal of the century will be launched right after the Israeli elections, but we, the Israelis, are in the dark about the plan itself,” Bennett said. While calling Trump “a true friend to Israel,” he added that “friends do not keep secrets one from another.”
• The merger last week between Jewish Home and Otzma Yehudit (Jewish Strength) did not include former Shas party head, Eli Yishai and his party Yahad, which will run alone and have little chance of reaching the minimum 4 seat threshold. It is not clear if words from his Rabbi, leading Sephardic authority, Meir Mazuz, advised against the move or not.
• The Central Elections Committee will hold a debate and vote on whether to ban Otzma Yehudit’s candidates from running in the upcoming election, after Labor and Meretz gathered enough signatures for their petition. Parties can be disqualified from running in an election if they reject Israel as a Jewish and democratic state, incite to racism, or if they support armed conflict by an enemy state or terrorist organizations against Israel. If the Central Elections Committee votes to ban a party, they appeal to the Supreme Court and in recent years, the court has overturned all bans.
• The Likud responded with a petition of its own calling to ban the Arab Balad party, which rejects Israel as a Jewish and democratic state. Balad MK Haneen Zoabi, who is not running for re–election, has previously said she rejects the idea of a Jewish state and expressed support for Hamas during Operation Protective Edge in 2014. Former Balad MK Basel Ghattas was convicted last year for smuggling phones to terrorists in prison. Balad founder Azmi Bishara is a fugitive from justice who fled Israel after being caught giving Hezbollah information about where its rockets landed during the 2006 Second Lebanon War. But although Balad has been banned several times in the past, the decision is always overturned by the Supreme Court, unlike the decision to ban the far-right Kach party in the eighties.
• In a related matter, the Central Elections Committee is made up of representatives from all parties and it therefore comes down to “politics.” Parties that will vote to ban Otzmah Yehudit will include Labor, Meretz, Blue and White, Hatnua, Ra’am, Ta’al and Hadash. Likud, Bayit Yehudi, Shas, UTJ, Yisrael Beytenu and the New Right plan to oppose the ban. Yesh Atid also plans to support the petition to ban Balad.
• Former Jerusalem Post columnist Caroline Glick and social activist Chili Tropper are likely to be the only candidates who will have to relinquish citizenship in their English-speaking countries of birth, after polls indicated the two will make the next Knesset. Yair “Yaya” Fink, whose parents are from Brooklyn, New York and Scranton, Pennsylvania, was bumped from ninth to twelve on the Labor list. The party is currently polling between 5 to 9 seats.
• The new Blue and White party led by Benny Gantz has been criticised for not having any women within its top 6 list of candidates. The party does however have three party leaders in its top 3, and three former IDF chief of staff’s in its top 4. Sitting at slot number five is the head of the very powerful trade union Histradrut federation, Avi Nissenkorn, who announced this week he will be taking a leave of absence to run for Knesset.
• The Labor party led by Avi Gabbay has called for the settlement blocs to be officially defined and that building outside of the area should cease compensating those residents who would wish to return into a future designated settlement bloc area. He also called for a demilitarized Palestinian state.
• After splitting, getting back together again and then once again splitting, the Joint List, which consists of four separate Arab parties and became the third largest party in the last Knesset, decided to pair with each other. Ahmed Tibi who heads the Ta’al (Arab Movement for Change) party, joined with Hadash known as the Communists and Ra’am (Islamic Movement) joined with the nationalist but mostly secular Balad party.
• No one knows how long chain-smoker Mahmoud Abbas, 83, who heads the Palestinian Authority, PLO and Fatah, will last, but another Abbas will be in the Knesset – Balad party head, Dr Mansour Abbas, who is a dentist by profession.
• Party political broadcasts on radio and television began on Tuesday night and will run until Monday 8 April, the day before the election.

The minimum threshold a party must receive is 3.25% which is equivalent to four Knesset seats. If a party receives less, the votes are discarded.

The general election for the twenty-first Knesset is Tuesday 9 April.