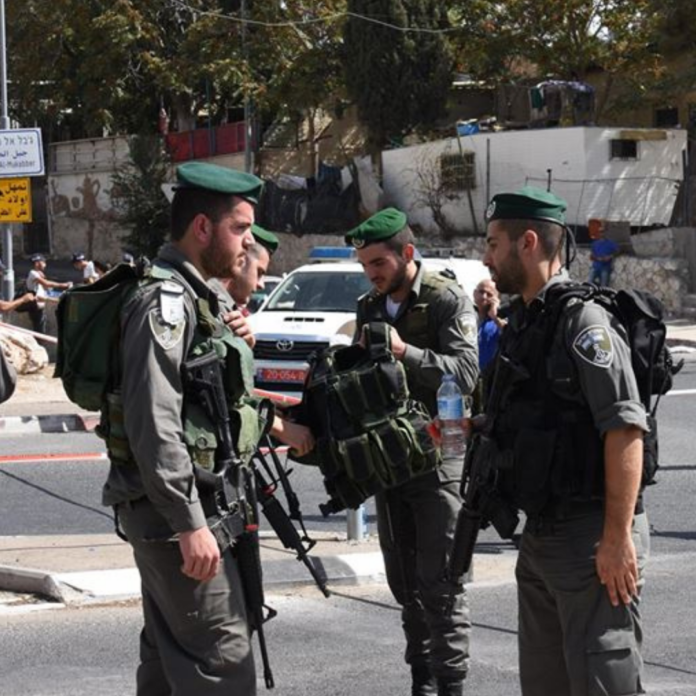 Israel is on the highest state of alert from terrorism after three terror attacks in a week.

Eleven citizens have been killed including five in Bnei Brak on Tuesday and two border police officers in Hadera last Sunday. Thousands of mourners attended funerals.

Seven Israelis were murdered in Be’er Sheva last week. There have been 10 terror attack this month.

The killing spree has rocked the nation and comes after Bennett visited Egypt last week and Israel held the Negev Summit in recent days.

Israel had planned easing restrictions for freedom of prayer in Jerusalem, including for West Bank Palestinians. Earlier this week Israel increased permits for Gazans to work in Israel. The security cabinet is analysing whether terrorists will look to strike.

Tensions have surged and there is growing concern with Ramadan and Pesach next month.

“My heart is with the families who have lost their loved ones,” he said. “I am praying for the recovery of the wounded.”

Israel’s leader vowed to fight back. “The security forces are at work,” Bennett said. “We will fight terrorism with persistence, diligence and an iron fist. They will not move us from here. We will prevail.”

He added, “Every few years the State of Israel deals with a wave of terrorism. After a period of quiet, there is a violent eruption by those who want to destroy us, those who want to hurt us at any price. They are prepared to die, so that we will not live in peace.

“We are currently dealing with a new wave of terrorism. What we witnessed less than a year ago in Operation Guardians of the Walls, the terrorism and the violence, from within Israel and inside Israel, was the first sign. This is a great and complex challenge for the IDF, the ISA and the Israel Police that requires the security establishment to be creative and for us to adapt ourselves to the new threat and read the tell-tale signs of lone individuals, sometimes without organisational affiliation, and to be in control on the ground in order to thwart terrorism even before it happens.”

Bennett said that the civilians and police officers who shot the terrorists were heroes of Israel who had saved lives.

“We face a challenging period,” he continued. “We have experience in dealing with terrorism from the very beginning of Zionism. They did not break us then and they will not break us now.”

Gantz commented, “We have been through difficult periods, as a people and a country, in the face of waves of terrorism and we have always prevailed with resoluteness and strength, and that will be the cast this time too. The entire security establishment the IDF, the Shin Bet and the police, will act with all means to restore security to the streets of Israel and the sense of security to the citizens.”

Shabtai said forces would be deployed in city centres and major urban areas. The IDF has been bolstered along the West said Kochavi.

Palestinian Authority Chairman Mahmoud Abbas also condemned the attack. But the local leader of the Fatah Party in Jenin said the killer was a “heroic martyr”.

Diaa Hamarsheh, a resident of Ya’bad near Jenin in the West Bank, was responsible for the attack in the ultra-Orthodox city of Bnai Brak.

Israeli forces raided the killer’s home town of Hamarsheh on Wednesday. Hamarsheh illegally lived and worked in Israel. He was previously imprisoned for security offences and released in 2015.

The 26-year old terrorist was armed with an M-16 rifle when he killed police officer Amir Khoury, a 32-year old resident of Nazareth and Arab citizen.

Khouri’s partner shot dead the assailant at the scene. He is survived by parents and three siblings.

It has been reported that adaptations to the gun resulted in lives being saved.

Yaakov Shalom, a 36-year old from Bnei Brak and father of five, was murdered while driving his car.

Rabbi Avishai Yhezkel, 29, was a teacher walking with his two-year-old son outside his home. His wife is expecting the couple’s second child. Both were buried in Bnei Brak.

Residents joined political leaders at the funeral of Rabbi Yehezkel, who was protecting his two-year-old son when he died. His wife is pregnant their second child.

Rabbi Menashe Yehezkel, Avishai’s father, said his son was concerned for his elder brother and called to warn him of gunfire. “His bravery was in his character,” he reportedly said.

Shas Party leader Arye Deri gave a eulogy. “You are pure and sacred,” he said. “How can parents be consoled for the death of their son?” he asked.

Deri said Yehezkel’s death must not be in vain and leaders must stop the terror wave.

Shin Bet security forces arrested 12 people linked to Islamic State in Arab towns in northern Israel in the wake of the deadly Hadera attack where border police officers Yezen Falah and Shirel Abukarat, both 19, had served in the West Bank unit.

The officers reportedly died when the terrorists opened fire at a group of people getting off a bus.

Special forces at a nearby restaurant prevented a massacre when they shot dead the terrorists.

Ibrahim and Ayman Agbarria, cousins and Israeli citizens from Umm al-Fahm in northern Israel, were wearing body armour and had automatic rifles.

Ibrahim was indicted in 2016 for attempting to join the Islamic State in Syria.

“The soldiers fought with bravery, we share the sorrow and hug the families of the heroes Yezen and Shirel who defended the citizens with their bodies and saved many lives,” an IDF statement said.

“They were highly motivated young fighters who gave up their lives for the security of the people of Israel,” the notification added.

Gantz said the military and security forces were on high alert following the attack.

“We will act vigorously against terrorism and the terrorists, and we will advance the continued reinforcement of the forces on the ground,” he noted.

Foreign Minister Yair Lapid was in Sde Boker at the Negev Summit, he said, “The visiting foreign ministers condemned the attack and asked to send their condolences to the families of the victims and wishes for the recovery of the wounded.”

US Secretary of State Antony Blinken, added, “We condemn today’s terrorist attack in Hadera, Israel. Such senseless acts of violence and murder have no place in society. We stand with our Israeli partners and send our condolences to the families of the victims.”

President Isaac Herzog said, “The heart breaks from the horrible price that the victims and families had to pay when their entire worlds were came crashing by vile murderers. We must fight hatred and terror, I send my condolences to the families of the fallen officers.”

United Arab List’s Abbas noted, “I condemn the heinous attack in Hadera and state that the despicable terrorism of the Islamic State does not represent Arabs in Israel who are seeking a life of dignity under the law. Arabs value the sanctity of human lives and seek a life of Jewish and Arab partnership, peace and tolerance.”

Abukarat, of Netanya, joined the force six months ago. Her family made aliyah from France in 2006 and settled in Netanya. She is survived by her parents and brother.

“Her sole desire was to enlist in a fighting corps to protect Israel and its people,” he said. “Shirel fell in a heroic death and gave her life for Israel’s security.”

Falah, of Druze village of Kisra-Sumei, joined the Border Police last year. He is survived by his parents, brother and sister.

Yezen’s father, a member of the Israel Prison Service, said, “I know that every soldier, whether in the north or south, is in danger.”

The leader of Israel’s Druze community Sheikh Mufaq Tarif condemned the attack in a statement.

“It is a wicked attack, we cannot let terror rear its head,” he said. “Security forces must do everything in order to cut off the sources of terrorism and those who stand behind them. The Druze community is once again paying a heavy price for the defense and security of the state.”

The Hillel Yaffe Medical Center in Hadera said of 12 injured in the attack, five remained in hospital.

The attack occurred while Israel, United Arab Emirates, Bahrain and Morocco Foreign Ministers were due to meet US Secretary of State Antony Blinken at the Negev Summit.