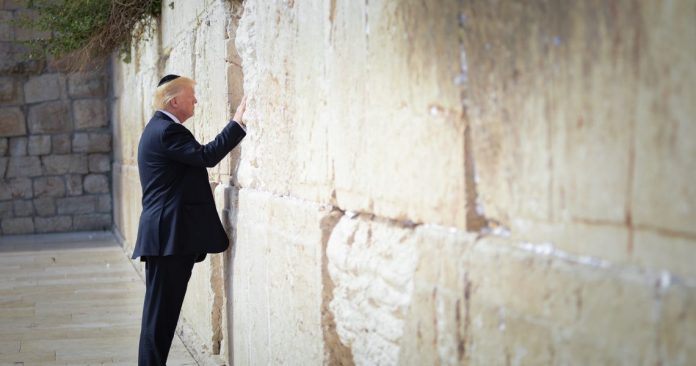 In an historic speech on Wednesday night, President Donald Trump kept his campaign promise in the face of massive opposition especially from his own US State Department and said the words, “I have determined that it is time to officially recognise Jerusalem as the capital of Israel.”
The President’s speech was welcomed by millions around the world and many applauded Donald Trump for his courage and commitment despite the Palestinians declaring a day of rage on Friday in response.
President Trump went further by announcing that he is “directing the state department to begin preparations to move the American Embassy from Tel Aviv to Jerusalem” and confirmed “this will immediately begin the process of hiring architects, engineers and planners so that a new Embassy, when completed will be a magnificent tribute to peace.”
Although several American delegations have been in Israel to seek out a suitable Jerusalem location over the last 12 months, it is believed that a final decision on where the Embassy will be built is still to be made. But high on the list is a plot of land located on Derech Hevron close to the Peace Forest.
Supporters of the relocation of the US Embassy have for years urged the Americans to take over their Consulate building on Agron Street, close to the Wardolf Astoria Hotel. But this is simply not suitable to house so many necessary departments and operate a fully functional working representative on behalf of Washington DC.
However, Donald Trump ended his ten-minute speech by signing the waiver form in front of journalists and delaying the move by another six months as he did last June, suggesting this was due to logistical challenges.
But the first move has been made by President Trump and it is long overdue. Some expect other nations to follow over the next two years but the British Embassy is likely to remain in Tel Aviv for a long time as the government focuses on Brexit negotiations.
Mr Trump made it clear that his announcement does not mean America is turning away from a lasting peace accord. “We want an agreement that is a great deal for the Israelis and a great deal for the Palestinians,” he said.
And added “we are not taking a position on any final status issues including the specific boundaries of the Israeli sovereignty in Jerusalem or the resolution of contested borders,” which confirms Trump will not attempt to force an agreement on either side, unlike previous administrations.
But it was clear, The White House would assist in a peace agreement if the sides want one. For this to happen, the Palestinians have to return to the negotiating table and cease demonising Israel in the international Court of Justice and the United Nations.
But Palestinians in Gaza and the West Bank have reacted by burning photographs of the US President while Hamas said the Embassy move was “breaking all the rules,” as if the Islamists hold to any rules.
Deputy head of the southern branch of the Islamic Movement, Sheikh Safwat Farig said they would protest opposite the US Embassy and that “it’s clear it won’t be business as usual and we won’t sit passively.”
Palestinian Foreign Minister Riyadh Malki called for an emergency meeting of the Arab League
while the 57-member Organization of Islamic Cooperation (OIC) insisted on a summit as they say, Jerusalem is one of the most contentious issues of the decades-long Israeli-Palestinian conflict.
Former MK Mohammed Barakeh, who is now chairman of the main leadership body of Arab citizens, warned “The Americans are playing with fire because it touches on the capital of the Palestinian people. Jerusalem is the capital of the Palestinian state and this makes it a capital without a heart.”
In response, the US issued a travel warning for all its citizens to avoid East Jerusalem which includes the old city and Western Wall, along with the West Bank for fear of possible violent demonstrations and riots. However, the Israeli army held a status evaluation on Wednesday morning and is prepared for any backlash.
Most of the international community does not formally recognize Jerusalem as Israel’s capital and all foreign Embassies are located in Tel Aviv with consular representation in Jerusalem. But despite Trump’s instruction to now transfer the Embassy, the move could take three to four years as time is needed to prepare a structure, security arrangements and a plan to transfer such a large embassy with so many employees.
The timeframe effectively means that President Trump has to complete the task within his four-year term as President because should he not win a re-election bid, his successor will be able to revisit the decision and change it.
Last Thursday the UN General Assembly voted overwhelmingly to disavow Israeli ties to Jerusalem as part of six anti-Israel resolutions in New York. The vote was 151 in favour and six against, with nine abstentions.
The six out of 193 UN member states were Canada, Marshall Islands, Micronesia, Nauru, the United States and Israel itself.