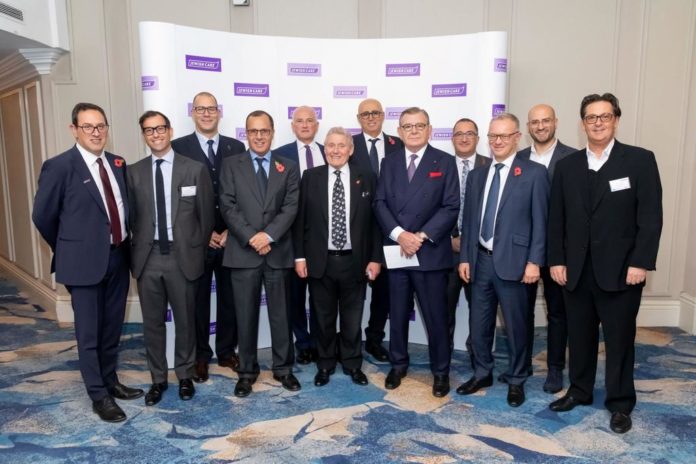 The lunch, in its 11th year of partnership with the Topland Group, featured a conversation between the founder and Chairman of Berkely Group Holdings, one of the country’s largest housebuilding businesses, Tony Pidgley CBE and journalist and former Director of BBC News, James Harding, focussing on Tony’s background in the housing business, causes of the current housing crisis, what needs to be done to drive up homebuilding, and how Brexit has affected his business.

The award this year, given in memory of Philip Greenwold, who was one of the Topland Group Lunch Committee’s original members, was awarded to Helen Aronson BEM.

Helen is a much-loved member of Jewish Care’s Holocaust Survivors Centre, which supports over 500 survivors a year. For almost 50 years, Helen rarely spoke of her wartime experiences to either her family or friends. However, in 1992, she felt compelled to give her first full oral testimony to the United States Holocaust Memorial Museum. Since then, Helen has shared her story with audiences of all ages and appeared in films and documentaries about the Holocaust and the Lodz Ghetto. Every year, she participates in Holocaust Memorial Day events and remembrance services, including, earlier this year, addressing MPs at Westminster.

Helen dedicated the award to her father, Motush Chmura, who volunteered to accompany the innocent children of her town when the Nazis separated them from their parents and loaded them onto trucks bound for an unknown destination, which turned out to be Chelmno concentration camp. Helen said that “His unselfish action and lack of thought for his own safety, is the real definition of “heroism”. He is, and always will be, my “Unsung Hero”.”

Helen was recently named in the Queen’s Honours List, being awarded the British Empire Medal for her services to Holocaust education.

On accepting her award, Helen Aronson BEM, said “As long as I am able to do so, I will carry on speaking to young people about the Holocaust and I ask all of you here to speak up too. Tell everyone about the Holocaust and other genocides that have happened since then. It is vital that we all do everything in our power to ensure that these things never happen again, anywhere in the world.”

David Pollock, Chairman of the Topland Group Business Committee, said “It is a real source of pride to the Topland Group to be able to support this lunch and help to raise so much for Jewish Care. We extend a hearty Mazal tov to Helen Aronson on winning this year’s award and look forward to hearing more about her work for many years to come.”

Sol Zakay, Executive Chairman and CEO of the Topland Group, said “We are so pleased to see a record number of people here again this year. Alongside such an interesting and informative conversation about business development, Brexit and the housing market, it is so important that we see someone like Helen honoured for her work and dedication to Holocaust education. The Topland Group lunch provides a truly unique opportunity for this mix to happen, and we are delighted to continue to work with Jewish care on such a meaningful event.”

Daniel Carmel- Brown, Chief Executive, Jewish Care, said “We are incredibly grateful to our generous supporters at the Topland Goup Business Lunch, who helped to raise a huge amount of money for our core services. We would not be able to do our work without their support. Jewish Care was also honoured to give this year’s award to Helen Aronson who has dedicated so much to Holocaust education, something that is so important not just to our community, but to the world.”