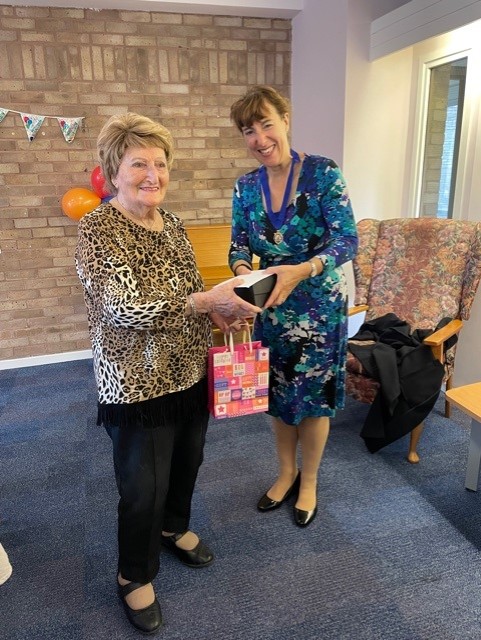 On Wednesday 20th October, family, other tenants and staff at Jewish housing association, jLiving, helped Mary van Gelder to celebrate her 104th birthday with a lovely party at the jLiving scheme in Harmony Close, Golders Green.

As well as all of Mary’s family, friends at Harmony Close and jLiving’s Housing Manager Simona and Welfare Officer Biljana attending the party, the former Mayor of Barnet, Councillor Caroline Stock and her husband, also came along, representing the Mayor. Councillor Stock is pictured left, presenting Mary with a gift and a card.

The birthday girl enjoyed sandwiches, tea and a lovely birthday cake and made a speech. She doesn’t drink, so she toasted her birthday with a glass of apple juice!

Mary, who moved into Harmony Close when she was 95, is an amazing lady who still lives independently and enjoys life to the fullest with very little assistance. She still does her own cleaning and also goes out once a week to do her shopping in Edgware or Brent Cross. She makes tea and coffee for her fellow tenants at the Tuesday coffee morning at Harmony Close and always clears up afterwards, telling everyone that she doing enjoys it! Before Covid, she used to play cards three times a week in the communal lounge and go to bingo which she loved. Mary loves making a fuss of others but on Wednesday, she was the centre of attention and her family and friends were able to make a fuss of her.

Staff at jLiving said of Mary: “She is a very positive and happy person and just gets on with things; she has pain in her legs but she never complains. She looks after herself, likes to be presentable and always gets dressed and puts her make up on before she sees anyone. She says that she doesn’t want to let herself go! She makes her own meals, batch cooking so she always has meals in her freezer including chicken soup. She wears no hearing aids and walks without a frame or anything – she is quite remarkable. She is very content with life and has a great disposition.”

Mary has had an incredibly full life. She had a daughter, Maxine, (who sadly passed away in 2007 from cancer), two grandsons and three great grandsons. Martin, one of her grandsons visits her every Sunday even though it is a 2-hour journey.

Mary was born in Cheetham Hill, Manchester and had three brothers (all have passed away now). The family moved to the East End when she was four. Her father passed away from pneumonia, caught in the war, when Mary was nine. In 1940, she met and married Harry.

She spent time in Bristol when she was first married, as that was where her husband was based and she worked for a short time in the Bristol aircraft factory as a machinist. She worked on a lathe making screws for the planes.

She came back to London and was later evacuated with her mum to Leeds, by which time she was pregnant with her daughter Maxine, who was born in 1944. Mary, Harry and Maxine moved to Bethnal Green once he left the Army and then to Palmers Green. Harry was a cabinet maker.

Maxine married at 19 and Mary moved to Bournemouth when Harry retired. They lived there for around 30 years. When he passed, she moved in with her daughter in Cockfosters and they enjoyed four wonderful years living together before Maxine sadly became ill and died. After a few years, Mary moved to Harmony Close.

When asked what is her secret to a long life, Mary says that she loves clothes shopping, is a night owl, never smoked and loved having dogs as pets when younger. Her favourite singer is Nat King Cole and she starts the day with cornflakes, honey and blueberries, along with tea with honey!

Jane Goodman, CEO of jLiving, said: “It is heart-warming to see Mary still enjoying life so much, especially living at Harmony Close where she has so many wonderful friends. She really does make the most of every minute and is an inspiration to us all! Happy 104th birthday, Mary!”