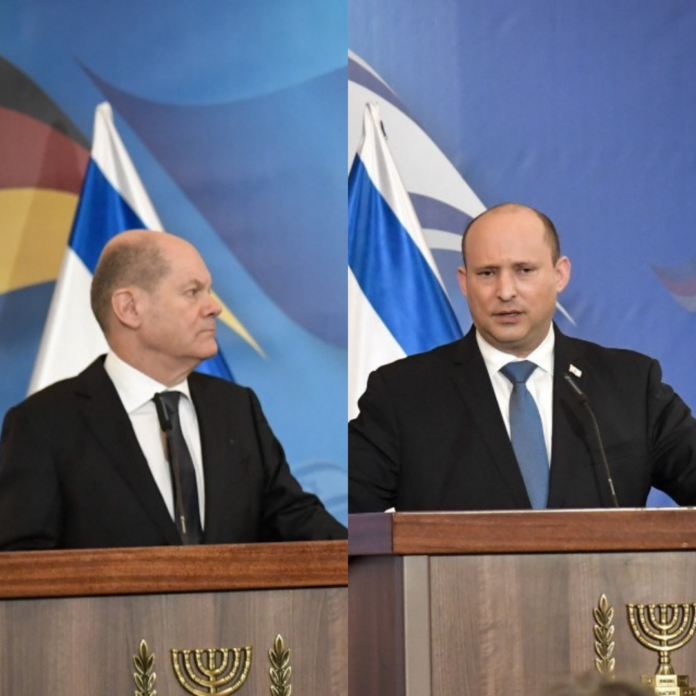 Every Jew carries the memory of the Holocaust with them Prime Minister Naftali Bennett told Germany Chancellor Olaf Scholz at Yad Vashem yesterday at the start of a state visit.
Yad Vashem Chairman Dani Dayan accompanied the leaders on a tour of the world famous remembrance centre.

Bennett officially welcomed Scholz at the end of the visit and noted its importance.
“The first stop on your visit to Israel is the most important,” he said. “The Holocaust, the systematic annihilation of Jews, is the wound that forms the basis of ties between Germany and Israel. From this wound we have built significant and steadfast relations.
“Mr. Chancellor, even today, 80 years after the war, there is no Jew who does not carry within him the memory of his six million brothers and sisters, men, women and children. who perished in the camps. Even today, in a strong and prosperous state, a state of warmth and happiness, in each one of us, even several generations later, there is deep sadness that does not disappear.”

Bennett thanked Scholz for his commitment to the memory of the Holocaust and Jewish people.

The leaders visited the Hall of Remembrance and following the ceremony toured the Children’s Museum and visited Janusz Korczak Square.

During a joint press conference Bennett said that Israel-Germany relations had come a long way since the days of former leaders Prime Minister David Ben-Gurion and German Chancellor Konrad Adenauer.

“They are more steadfast than ever,” noted Bennett, who announced the creation of a new strategic cooperation between the State of Israel and Germany. “This will be in the format of a bi-annual dialogue on security and diplomatic matters. This is a significant upgrade in our relations.”

Regarding hostilities in Ukraine, Bennett said both had a responsibility as leaders to help stop the bloodshed and bring what was occurring from the battlefield to the negotiating table quickly.

“To my regret, we in Israel have experience with wars,” he said. “Their price is great as we have already seen. Unfortunately, it could get much worse.

“The State of Israel stands alongside the people of Ukraine. We have sent considerable humanitarian assistance and are determined to continue and even do more.”

Bennett also said that both were charged with making sure Iran has “neither nuclear weapons nor the possibility of attaining them” on their watch at leaders.

“We are closely monitoring the talks in Vienna including the possibility that an agreement will be signed that allows Iran to install centrifuges on a broad scale within a few years,” he noted. “This possibility is unacceptable to us.”

Bennett added, “Israel will know how to defend itself and ensure both its security and its future. We also expect our friends in the world not to countenance a massive installation of centrifuges in another two-and-a-half years, and to already prepare for the day after.”

Bennett also spoke about his coalition of eight parties compared to Germany’s three in government.

Bennett added, “The world that we have known is changing. The challenges are great. We must join hands and work together to meet them.”

Scholz also attended a meeting with Speaker of the Knesset Mickey Levy during a packed schedule.