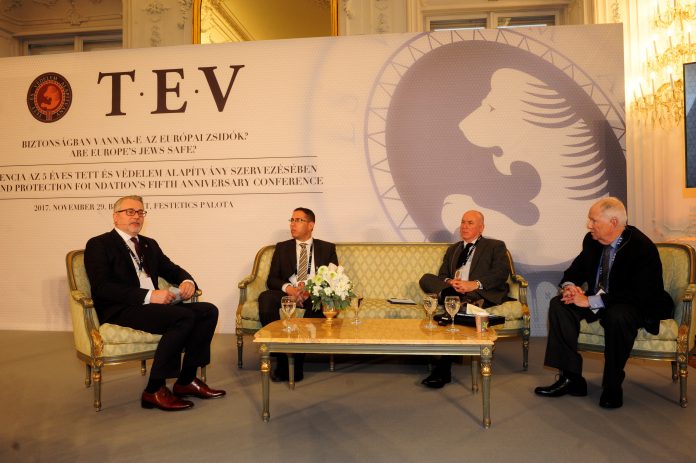 “Jobbik have not changed, they are a wolf in sheep’s clothing and represent a serious threat to Hungary’s Jewish community.” These were the words of Rabbi Shlomo Koves at the Action and Protection Foundation’s (TEV) fifth anniversary Conference in Budapest.
Speaking about the extreme-right party Rabbi Koves, of the Unified Hungarian Jewish Congregation and co-founder of TEV, explained the importance of the Jewish community standing up for themselves, he said: “Jobbik has not changed, they are a wolf in sheep’s clothing and represent a serious threat to Hungary’s Jewish community. In recent times Jobbik has been drawing closer and closer to left-wing, opposition parties. In their latest step, Jobbik has even revealed its intentions to form a coalition with liberal, left-wing parties LMP and Momentum. But they have not changed their policy, these are artificial changes to get power and to detract from the embedded racism and anti-Semitism that remains within the Party.”
Government representatives at the conference discussed the work the current government has done to protect the Jewish community. Dr Istvan Mikola, Minister of State for Security Policy explained how Jewish culture had made Hungarian culture “stronger and richer.” He went on to say, “It is important to remember that Hungary is one of the fifteen countries that declares holocaust denial is a crime and takes a zero-tolerance approach to anti-Semitism. We want to create a climate where everyone can practice their religion.”
Rabbi Andrew Baker Personal Representative of the OSCE Chairperson-in-Office on Combating Anti-Semitism (OSCE), said, “The essential safety and security of Jews and Jewish institutions are no longer things that we can take for granted. Statistics may vary year by year but largely there has been an increase [in anti-Semitic incidents]. Fortunately, recognition [the OSCE definition] of antisemitism has ensured that there is a central provision for safeguarding communities. The working definition was always intended to be an operational tool. I very much hope that the Hungarian Government will also accept the [OSCE] definition of anti-Semitism.”
He went on to say, “We know the threats that comes from nationalists and xenophobic parties. Anti-Semitism is at the heart of what they say, and it is the one aspect that unites them. Their targets may vary from country to country, but anti-Semitism is consistent.”
The TEV’s Fifth Anniversary Conference comprised of a series of lectures and panel discussions regarding how migration patterns effects European Identity, the rise of anti-Semitic incidents and how they are measured and how young people are adapting to anti-Semitic threats. The high-level conference was hosted by Hungarian Interior Minister Sándor Pintér, the newly appointed Patron of TEV, and took place at the Andrássy University in Budapest.
Other high-profile speakers included Dr. Csaba Latorcia an official at the Hungarian Prime Minister’s Office and Mike Whine, director – Community Security Trust (CST).