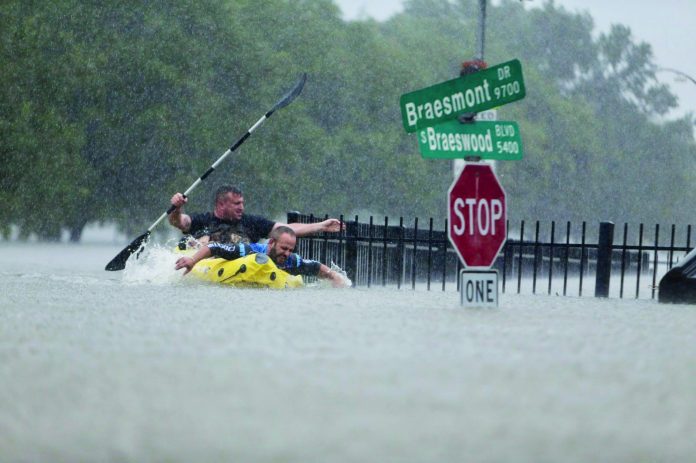 The call for people to contribute to the Hurricane Harvey Relief Fund set up by the Jewish Federations of North America and the Houston Jewish Federation comes as kosher food has reportedly run out.

The floods have overtaken Houston and affected close to three quarters of the city’s Jewish population which is estimated to be around 65,000 people.

Most of the Houston Jewish institutions and synagogues were in the path of the deadly force of waters and although households have faced tropical storms and floods in the past, this is by far the most extreme. Half of the total yearly rainfall fell in just three days reaching 50 inches and another 50 inches was expected.

According to YWN, Houston’s Jewish Federation, Jewish Family Service and the Orthodox organization Agudat Yisrael immediately opened disaster relief funds. In addition, they each set up and co-ordinated a crisis relief hotline providing food, air conditioning, internet, electricity for a limited time and some housing. Some staff members including therapists were available for people who have hurricane-related anxiety.

Meanwhile, Chabad of Texas coordinated truckloads of kosher food to be sent to the areas hardest hit and set up a kosher food pantry available to the Jewish community as supplies reached the area. Chabad emissaries in Houston had been preparing and delivering kosher meals to people evacuated to emergency shelters or who took shelter in hotels.

But Houston has always had a limited amount of kosher food. Even as its Jewish population has rapidly grown in recent years, as has the general population, it remains geographically distant from kosher manufacturing bases on the coasts and the heartland.

Each week, trucks carrying kosher food arrive from hundreds if not thousands of miles away. A handful of chain supermarkets carry kosher meat, poultry and milk to supply Houston’s Jewish community. But Hurricane Harvey flooded two of these main supermarkets and caused the other two to shut down. One of those two supermarkets have now been turned into a shelter by authorities.

Rabbi Dovid Goldstein, a Chabad emissary in Houston who is coordinating the kosher food-relief effort for the community, told Chabad.org that supplies were low and that an order had been placed for kosher meat. Although it was scheduled to leave Miami on Tuesday on a refrigerated truck, it can only reach Houston if the roads are cleared of water.

Israel Diaspora Affairs Minister Naftali Bennett wrote on his Facebook page: “For years, the Jews of Houston were there for us, and now we can be there for them – All Israel is responsible for each other,” he concluded, quoting the famous rabbinic saying.

After hitting Houston hard on Sunday, Hurricane Harvey moved into the Gulf of Mexico and then headed north bringing heavy rain to Louisiana.

Whilst the storm caused devastation across the state of Texas, it is the widespread flooding due to the rain and overflow of rivers that has caused the catastrophe.

The International Aid Organization (iAid) based in Israel sent relief professionals to coordinate efforts with the Texas National Guard and American NGOs on Tuesday. In the long term, iAid hopes to help with technological needs of the community, such as water purification, using Israel innovations.

Bur for now, the freeway system is almost shut down and those that chose to stay in their homes could not leave once the storm hit, due to the amount of water that hit the highway system.

Homes have been without power for days and floodwaters have reached the roofs of some family homes. Many animals and pets were seen washed away in the raging waters. At least 22 have been reported dead and the Houston television station KHOU said that six family members drowned when their van was swept away by floodwaters.

The National Hurricane Centre Public Advisory for Harvey in an advisory said that “catastrophic and life-threatening flooding will continue in south eastern Texas and portions of southwestern Louisiana.”

Rabbi Yossi Zaklikofsky, who serves as leader of the Shul of Bellaire and suffered the flooding of his own home said, “Even for those who were fortunate not to lose electricity, like us, it’s a matter of days until we have no milk and other basics.”

He added that many of those who did lose their electricity lost whatever kosher food they had stockpiled. “And when the stores do reopen, it is open question as to what they’ll actually have that’s salvageable.”

For now, basic staples like rice and cereal are available in unflooded grocery stores. But thousands of people in Houston are still sheltering in place, and when that order is lifted, food supplies will inevitably plummet.

Pinny Bard-Widgor moved to Houston from New York just last week with his wife and children. As weather reports poured in prior to Shabbat, Bard-Widgor decided to take his family to Fort Worth, a five-hour drive away. Local friends told him that he was overreacting. He still doesn’t know the extent of damage to his new home.

With his family safe in Fort Worth, Bard-Widgor flew to New York on Sunday evening for work, and is now helping to coordinate a kosher-food shipment from Brooklyn.

“We’re working on getting a truck of perishables and another of non-perishables,” says Bard-Widgor, though he was still having difficulty getting hold of a refrigerated truck. The Jewish Learning Centre of Dallas is sending meals to storm-affected areas and will also be hosting many people over Shabbat.

In addition to supermarkets and kosher restaurants (all of which have also been flooded), a number of Jewish families in the Houston area have been storing their kosher food in a large freezer due to the High Holidays approaching, but have now lost all of it.
The disaster saw rainfall that usually falls over six months in Texas fall in just a few days, with areas worst hit seeing over 10 feet of water in people’s homes.