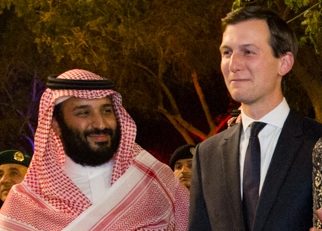 The White House said the US envoys “discussed increasing cooperation between the US and Saudi Arabia, the need to facilitate humanitarian relief to Gaza, and the Trump administration’s efforts to facilitate peace between the Israelis and Palestinians”.

The US is working on a plan to restart Palestinian-Israeli talks. The plan was expected to be unveiled after the Muslim holy month of Ramadan but the announcement is now likely to be delayed for several weeks. Haaretz quoted a US official who said the plan will include ideas and proposals but not a clear roadmap for negotiations.

Yesterday, Jason Greenblatt criticised Hamas for its failure to properly govern the Gaza strip. He tweeted: “Hamas continues to fail the Palestinians of Gaza – arson kites & balloons & many mortar & rocket attacks directed against Israelis.  How can the international community help when murderous Hamas leaders continue to squander the resources of Gaza?  The people deserve better.”

Kushner and Greenblatt are scheduled to visit Israel, Egypt and Qatar and this is Kushner’s fourth trip to Saudi Arabia since 2017.