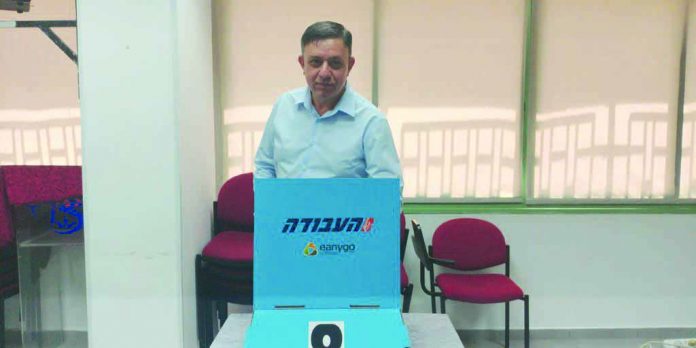 Avi Gabbay joined the Labor party just six months ago to make a bid for the leadership and on Monday he was swept to victory after a close runoff race against veteran MK and former Labor chairman Amir Peretz.
Gabbay won 16,080 votes, which was 52% of the vote, while Peretz won 14,734 votes, or 47%. However the former environment minister with the Kulanu party will not be allowed to become opposition leader as he has never been elected a member to the Knesset. The turnout of 58.8% was surprisingly high.
Peretz called Gabbay to congratulate him and Gabbay said that Peretz was his central partner in his mission to topple the Netanyahu government.
Former prime minister Ehud Barak posted a video to Facebook, in which he said that due Gabbay’s victory, Netanyahu and Bayit Yehudi leader Naftali Bennett were sweating.
Zionist Union MK Tzipi Livni congratulated Gabbay and urged him to maintain the Zionist Union bloc, which managed to receive twenty-four MKs in the 2015 election. However recent polling has put the party on just eleven seats.
Outgoing Labor chairman Isaac Herzog, who supported Peretz, said he spoke to Gabbay, congratulated him, and told him that he would help him strengthen Labor. It was reported that until there is another election, Gabbay has asked Herzog to remain opposition leader while he seeks to re-build the party and force an election which is not due until 2019.
At the Knesset, rival party leaders presented an atmosphere of business as usual, and claimed that the Labor race did not matter to them. Yesh Atid leader Yair Lapid said it did not matter who won the Labor race because, “For two-and-a-half years, the real political rivalry has been me against Netanyahu – Yesh Atid against Likud. The problems of Labor are not our problems.”