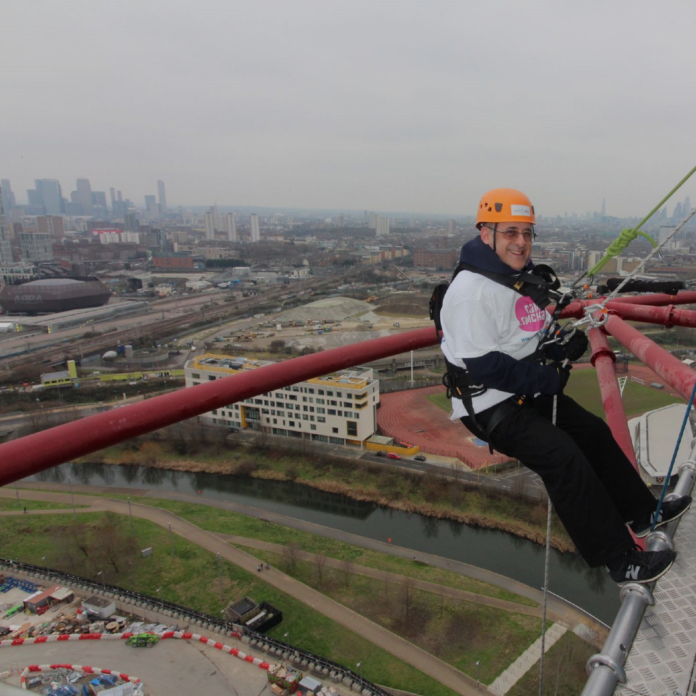 He was joined by his daughter Leah for the charity’s Dare to Drop challenge, as well as Ashira Hibbert and Joe Shefras who did their abseil late last year.

Billed as the UK’s highest freefall abseil, the challenge involves descending 80m to the ground.

Mr Goldschneider admitted to being ‘terrified’ as he stood at the top waiting to jump off.

“The Isolation Challenge I took on for Camp Simcha in 2020 – growing my beard for three months – was a bit less daunting – but then again this was over faster!

“When I arrived at the Olympic Park and turned the corner to be faced with the giant structure that I was about to jump off of, it felt very, very scary. I was literally shaking when I got to the bottom – as was my daughter Leah – but we raised nearly £3,500 between all four abseilers and the buzz once it was done was amazing.”

Joe Shefras, from North London, chose to take up the challenge shortly before his 18th birthday so asked friends and family to donate to his sponsorship page rather than give him presents.

“I volunteered with a friend at the Camp Simcha family fun day last summer and I saw the amazing work they were doing with the children and their families. So when I saw an opportunity to raise money for them and do the abseil I took it.

“The abseil itself was great fun; it was really surreal to be dangling 80m from the top of the ArcelorMittal Orbit but a great experience seeing all those amazing views all over London.”