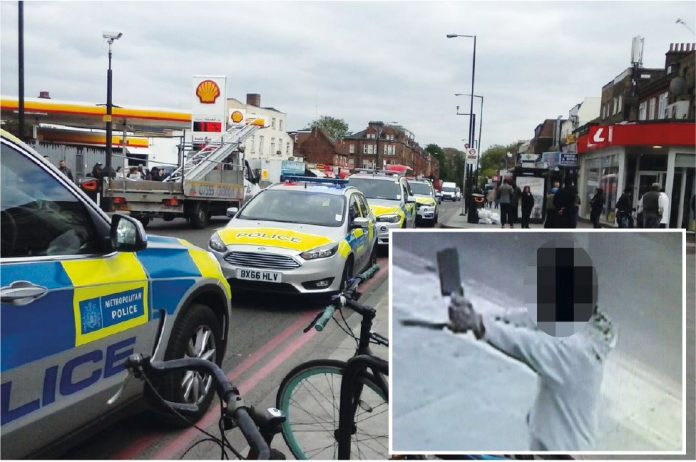 Shomrim immediately dispatched units to the scene who were minutes away whilst police were also called. Witnesses say they saw a male attempt to enter a kosher food store in an extremely aggressive fashion, shouting anti-Semitic abuse and obscenities. Staff saw what was taking place outside the shop, and before he could enter they locked the door.

But the man ran towards another kosher shop, this time gaining entry whilst brandishing a meat cleaver in one hand and what appeared to be a large knife in his other hand. He shouted, “Where is the boss, I will kill him.”

Staff at the second kosher store replied several times that the owner was not there and the man eventually ran out of the shop and onto the street, still armed with the weapons.

The male described as white then allegedly ran towards two young Jewish girls aged 14 and 8, shouting “You Jews run away from here before I kill you,” according to Shomrim.

When Shomrim arrived at the scene, they were told the armed man had run towards a block of flats close by. Shomrim volunteers followed him into the area and cordoned off the zone, stopping all members of the public from approaching.

Another Shomrim team who arrived on the scene retrieved the CCTV from one of the shops to get an idea of what they were dealing with.

Soon after the police arrived, an armed unit appeared on the scene and were immediately sent in to where the suspect was last seen entering the block of flats.

Police spotted their suspect, who then surrendered when he saw he was surrounded by automatic weapons, and an arrest was made.

It was later confirmed that there were no injuries reported, but several people were in shock and needed treatment.

The Metropolitan Police Service praised the bravery of the Shomrim volunteers and their dedicated work of protecting the public.

News spread fast around certain parts of the community and questions were being asked about how to guard against this type of potential attack.

The Campaign Against Anti-Semitism said that this was an extremely frightening incident and it was very fortunate that there were no injuries reported.

The level of anti-Semitic abuse and attacks continues to rise, especially around the Stamford Hill area where much of it goes unreported.

Mayor for London Sadiq Khan has previously said on a number of occasions that it is so important for the strictly Orthodox community of North Hackney and Stoke Newington to report verbal or any type of anti-Semitic abuse “so the Metropolitan Police can keep tabs on the numbers.”

Tuesday evening’s incident is clearly a much more serious development of anti-Semitism, and the public is urged to stay alert, be aware and report anything that looks suspicious.