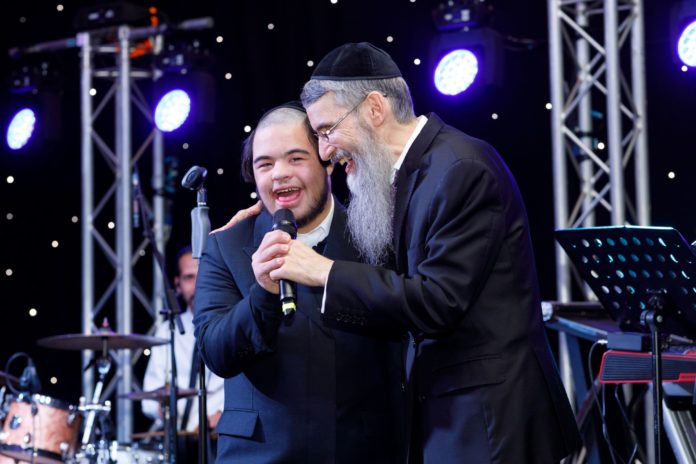 On Monday night, Manchester’s Jewish community were treated to a gala dinner titled “A Night of Appreciation” by the T’Mimei Lev Family, to honour and show gratitude to Rabbi Moshe Kupetz for over twenty years of support, inspiration and dedication to the school.

T’Mimei Lev, now in its 22nd year, was established to provide for children who, because of their special educational needs, are unable to attend a mainstream Jewish school. Unique in many areas, T’Mimei Lev combines the highest levels of academic excellence together with Kodesh studies in a harmonious manner, within a warm, Jewish atmosphere. Pupils have the ability to undertake mainstream GCSE and A-Level exams at their own pace in addition to learning life skills such as planning and preparing their own meals through to first aid.

The dinner featured entertainment by the world-famous Avraham Fried, accompanied by the Asaf Flumi orchestra. The performances were very touching as Avraham Fried included the pupils on stage and with him in song, with one parent present noting that for their child it was ‘like a piece of Gan Eden’.

The dinner was chaired by Rabbi Dovid Eisenberg whose introductory words spoke about the Sidros over the past two weeks which described both Noach and Avraham as T’Mimim. He reflected on how T’Mimei Lev sees the perfection in the hearts of its pupils and helps them to soar beyond their limitations. Note was also made of the late Mrs Miriam Friedlander who delighted the pupils so often with her piano playing and will be greatly missed.

Rabbi Yossi Chazan gave a tribute to Rabbi Moshe Kupetz, the guiding light of not only T’Mimei Lev by many other moisdos in Manchester – someone who has more than any single individual in the community has brought the love of Torah to the community.

A short D’var Torah was given by Yidele Kupetz – a pupil, and grandson of Rabbi Kupetz.

Those present were very fortunate to have Rabbi Kupetz at the dinner for a short while and he is wished a Refua Shleimo (Sholom Moshe ben Bayla).

Guests were treated to a lavish menu prepared by Yoel Wreschner of World Class Cuisine, aptly named given the quality of the catering and its presentation.

One of the highlights of the evening was a video presentation about the school which showcased the school’s programmes and encouraged those present to come and visit the school to experience it first-hand.