A manhunt is ongoing for the Palestinian killer of two Israelis in the West Bank town of Ariel on Sunday.

Doctors at Bellinson Hospital in Petah Tikva were unable to save Rabbi Ettinger, a father of 12, who died from his injuries on Monday.

Lila critically wounded another solider, 20-year-old Alexander Dvorsky from Nazareth, who is now out of danger hospital officials confirmed yesterday.

In the pursuit of Lila, who fled the scene with Kedat’s M-16 rifle, Israeli security forces have raided Palestinian villages, including the terrorist’s hometown, and questioned 15 Palestinians suspected of terror activity.

Defence forces have also bolstered West Bank areas where soldiers are stationed, including Ariel Junction. Concrete blocks have been erected to safeguard troops.

According to the military, Sunday’s atrocity appears to have begun when Lila stabbed Keidan, stole his rifle and shot him. The suspect fired at three vehicles, striking Rabbi Ettinger and then hijacking a car, shot Dvorsky at a junction nearby before fleeing to a nearby Palestinian village.

The vehicle was found abandoned at Bruchin.

During the early stages of the manhunt, Prime Minister Benjamin Netanyahu vowed to catch those responsible at a weekly cabinet meeting.

“I offer my support to the soldiers of the IDF, the ISA and security forces who are pursuing the terrorists,” he said. “I am certain that they will apprehend them and we will deal with them to the fullest extent of the law as we have done in all of the recent incidents.”

Netanyahu announced Israel would begin building 840 housing units in Ariel on a visit to the town following the terror attack.

“These terrorists will not uproot us from here, the total opposite will happen,” he told reporters. “We will begin building a new neighbourhood as was approved two years ago.”

Netanyahu added, “The two people who were killed were wonderful people, I am told. The hearts of the entire people are with their families.”

Posthumously promoted to the rank of Staff Sergeant, Gal is survived by his parents and two brothers.

A talented musician, teachers at a music academy in Beersheva paid tribute to their former student who excelled at the mandocello and was devoted to music.

His family requested no media coverage at the funeral at a military cemetery in Beersheva on Monday.

Head of Oz and Emunah Yeshiva in the Neve Sha’anan neighbourhood of Tel Aviv for the past three years, Rabbi Ettinger is survived by his wife and children.

The Ettinger family thanked MDA and Beilinson Hospital for trying to save his life.

A statement said Rabbi Ettinger died at the hands of a lowly murderer when he revealed daring, mental strength and courage, while shooting at the despicable terrorist.

President Reuven Rivlin paid tribute after hearing the heart-breaking news of his death.

“I was able to get to the hospital to be with his family who were davening for his recovery,” he said. “I embraced them on behalf of all Israelis and was overwhelmed by their strength. “Rabbi Ettinger’s life’s work will continue and be amongst us even after his passing, the strength he gave his pupils and community he led will continue to strengthen us through the enormous grief and sorrow.”

Over a thousand mourners attended Rabbi Ettinger’s funeral at the Segula cemetery in Petah Tikva.

Education Minister Naftali Bennett told the rabbi’s children, who gave moving addresses during the service, that their father was a hero and they should be proud of him.

“In his death, he didn’t do what most people would have in that situation,” he told mourners. “He didn’t run away, but strove to confront the terrorist. He fired bullets at the murderer and paid for it with his life.”

He also called on his family not to let terrorism defeat them.

“This wonderful family here in Eli will wipe away their tears and carry on, because that is what we do here in Eli and in all of the Land of Israel,” he said. “We grow stronger, but this pervasive evil, which repeatedly cuts down the best of us, must be defeated.”

The family have decided to donate the rabbi’s organs to save other people’s lives.

Hamas welcomed the attack as a response to the Israeli occupation, events in Jerusalem and Al-Aqsa Mosque in a statement. 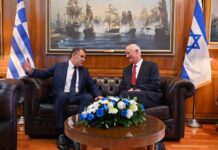