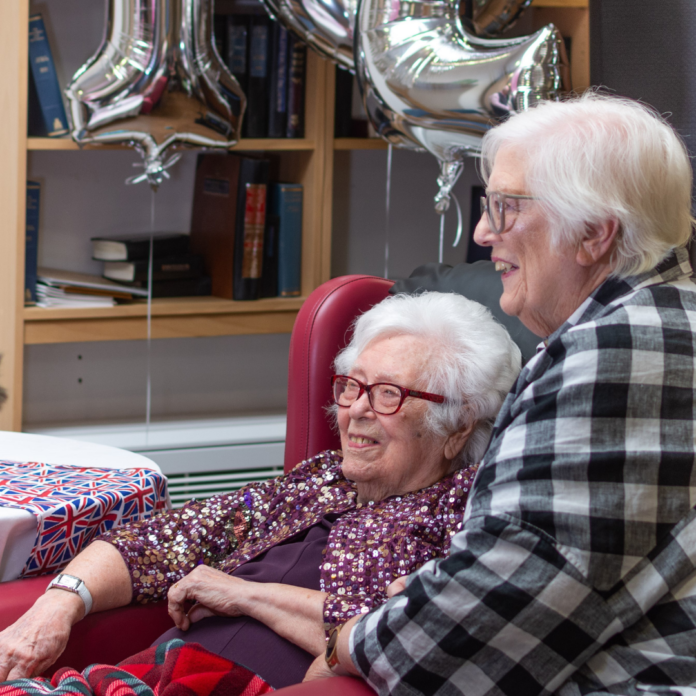 The first world war was still being fought when Heathlands Village resident Margaret Broome was born, and WW1’s legendary ruthless fighter pilot, the Red Baron, was still wreaking havoc in the skies.

She is also one few people to have lived through two global pandemics – Covid-19, and the Spanish flu of 1918.

Margaret has lived at the Prestwich care home, run by social care charity The Fed, since 2017. Shortly before her 104th birthday celebrations on February 4th, The Fed’s Marketing and Communications Manager, Joyce Khan, caught up with her daughter, Cllr Karen Garrido, a Conservative Councillor for Worsley ward and former Mayor of the City of Salford for 2016/17.

Sadly this year, only-daughter Karen was not able share the birthday celebrations planned by staff of the home to mark her mother’s momentous day. But her husband, Robin, was due to visit in her place and show Margaret video footage of her pals from Worsley library’s Friday coffee mornings, toasting her health and sending good wishes.

Joyce asked Karen how she explains her mother’s longevity:

“She’s never given up and she’s instilled that in me. She’d always say, ‘There’s no point in being in the back to get things changed.’”

Despite her pluckiness Margaret grew up as the very protected youngest child of four siblings, watched over by her parents and three older brothers and was not allowed to go out to work. The family home was near Haltwhistle in Northumberland in the heart of the UK, situated “…right on Hadrian’s Wall.”

Work attitudes for women changed when war broke out and Margaret was employed by Smith & Walters who produced paint for battleships, cannons, and military vehicles. She drove the articulated lorries delivering paint across country, travelling from Haltwhistle to Carlisle and down the then A6 over Shap – a busy route that was notoriously hazardous in poor weather conditions, often in winter becoming snow-bound and impassable – all the way to Preston docks

Describing how her parents met, Karen explains that a prisoner of war camp was located just outside Haltwhistle, which her father, who was “…high up in the military”, was sent to inspect. Whilst in the area he attended a concert, and here first set eyes on her mum.

“Mum was in the choir, and she had solos too. She was a big contralto and would sing in the halls in Newcastle. She sang all her life, even in the choir at Heathlands for a while too.

My Dad was bowled over by Mum and when ‘the boys’ – her brothers – came to collect her, Dad asked my Uncle Jack who she was and he said, ‘That’s my sister, Margaret!’ and Dad said, ‘She’s lovely!’.

“And then he met her again! He also had to go and inspect the paint at Smith & Walters and there she was in her overall with a scarf on her head – but he recognised her and invited her to the pictures.

“He arrived all dressed up in uniform with spurs on the back of his boots looking very sophisticated. But then he fell over when his spurs got stuck in stair carpet in the cinema. He very embarrassed and Mum laughed her head off!

“They had a great relationship; they were funny together and absolutely loved one another. I remember my father being sent to work in Africa for six months and when he came home, I was shipped off to my grandparents’ farm in Northumberland. I was perfectly happy about going off to see the ponies and other animals. It took me decades to twig that it was so that they could have special time together.”

Margaret did not work once she married. After the war the couple moved to Manchester which was “a great culture shock after living in a small village where she knew everyone.”

But she quickly made it her business to “get involved” and as Karen explains, “She took a voluntary position in family welfare, visiting homes immediately after a woman was sent from court to prison, to see what the family needed and if necessary, arranging places for the children to be looked after.”

Later she joined the Women’s Royal Voluntary Service, and for a period used to take the sweets trolley round in a local care home. There Karen recalls meeting “a little old man who loved to talk about horses with Mum and persuaded us to put bets on for him as he couldn’t get out to the bookies himself. We’d never placed bets in our lives before! And he won every week without fail!

“Mum also used to help my husband and I out in the business and would drive around in her mini with our Afghan hound, Edward, named after Edward Heath, looking like a woman on the front seat with other car drivers doing double-takes!”

Karen describes, with evident admiration and affection, how utterly involved her mother was in her life, touchingly saying, “She gave me all that I’ve got and what I am. She couldn’t stand injustice and I can’t either and that’s come from her.”

How though did a lady from a farm in Northumberland, with no connection to Judaism end up living in a Jewish care home? Karen recalls how as Mayor of City of Salford she visited Heathlands Village with her best friend and Mayoress, Beryl. “It was Remembrance Day in 2016, and we were looking round and I was so impressed I told Beryl that if she ever needed care she must make sure I came there!”

Shortly afterwards Margaret had a fall which landed her in hospital and on discharge she moved straight into Heathlands.

“I remember these two lovely residents, Zena and Myra, immediately taking her under their wing and involving her in everything. They sat her at their table and took her to shul where she went every week in a different hat lent to her by Zena!”

Apart from Karen and her husband, Margaret also has two grandsons, Damian married to Lucy, and Simon married to Julie and their two boys -her great-grandchildren – Miles 12 and Toby 10.