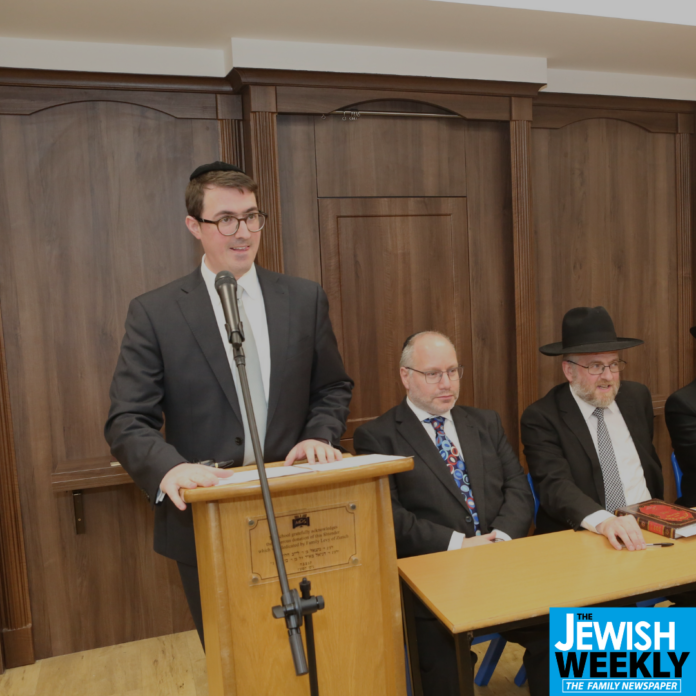 On Sunday Erev Tu Bishvat (16 January ’22) the governors of Menorah Grammar School hosted a festive Chanukkas Habayis in the school’s renewed Beis Medrash – seizing the opportunity to honour a pillar of chinnuch in NW London, the past menahel Rabbi Dovid Sulzbacher shlit”a, in the presence of his wife Mrs Rochel Sulzbacher, his successor Rabbi Yoel Rabinowitz shlit”a, the school’s Rov Horav Yisroel Meir Greenberg shlit”a, the current headmaster Mr Simon Appleman n”y and past governors, parents and grandparents.  The reconstruction of the Beis Medrash was made possible through a communal effort, coordinated by the NW London Jewish School Planning Association under the leadership of Mr Eli Katz n”y, Mr Pini Strom n”y and Mr Uri Goldberg n”y, and a substantive grant from a local charity that support all our local mosdos. Its construction was overseen by Mr Chaim Halviim who dedicated so much of his time and expertise.

Rabbi Rabinowitz opened with Mizmor Shir Chanukkas Habayis l’Dovid and Rabbi Sender Feldman presented Reb Dovid with a gift on behalf of the Rebbes of the school.  He emphasised Reb Dovid’s total dedication to everyone involved in the school.  Reb Dovid’s love for chinnuch habonim showed itself as he encouraged and supported the teaching staff, always building them up to achieve ever more to equip the talmidim with the benefits of a true Torah education.

Mr Yonason Perl n”y, co-chair of the board of governors, paid tribute to the generations of askonim who preceded the current leadership and stated that their sacrifices and achievements are the firm basis on which Menorah Grammar School will continue to build its bright future.  He joined the other speakers in lauding Reb Dovid Sulzbacher for his fortitude and sense of acharayus in the period before he handed the baton to his successor as menahel and agreed to serve as segan menahel, in addition to his return to his first love, teaching.  His recognition of the crucial support of Mrs Rochel Sulzbacher tichye for her husband’s avodas hakodesh elicited a thundering applaus.

Horav Yisroel Meir Greenberg, himself an MGS alumnus, emphasised the literal and symbolic centrality of the Beis Medrash in the school.  Everything that is taught in the school derives its significance from the Torah and gets its nourishment from the heart of the school.  He expressed his confidence in the future blossoming of Menorah Grammar School in a world where Torah-centric chinnuch must meet challenges that previous generations never knew.  Rabbi Greenberg made a presentation to Reb Dovid and joined the other speakers in putting Reb Dovid and his Rebbetzin in the spotlight of the whole kehilla’s gratitude.

The last speaker was Rabbi Sulzbacher himself.  The assembled audience was deeply touched by Reb Dovid’s palpable love for Hashem’s Torah, our precious children and his co-workers in chinnuch, in the school and outside.  He stated that a Menorah boy is recognisable as a Menorah boy, in the school and in the street.  All who heard his words felt that Reb Dovid considers himself very fortunate for having had the opportunity to spend his working life in chinnuch, and to continue doing that for a long time to come.

After the formal event many people lingered to talk among themselves.  How privileged is NW London to have a school like Menorah Grammar School with mechanchim like Reb Dovid Sulzbacher shlit”a. 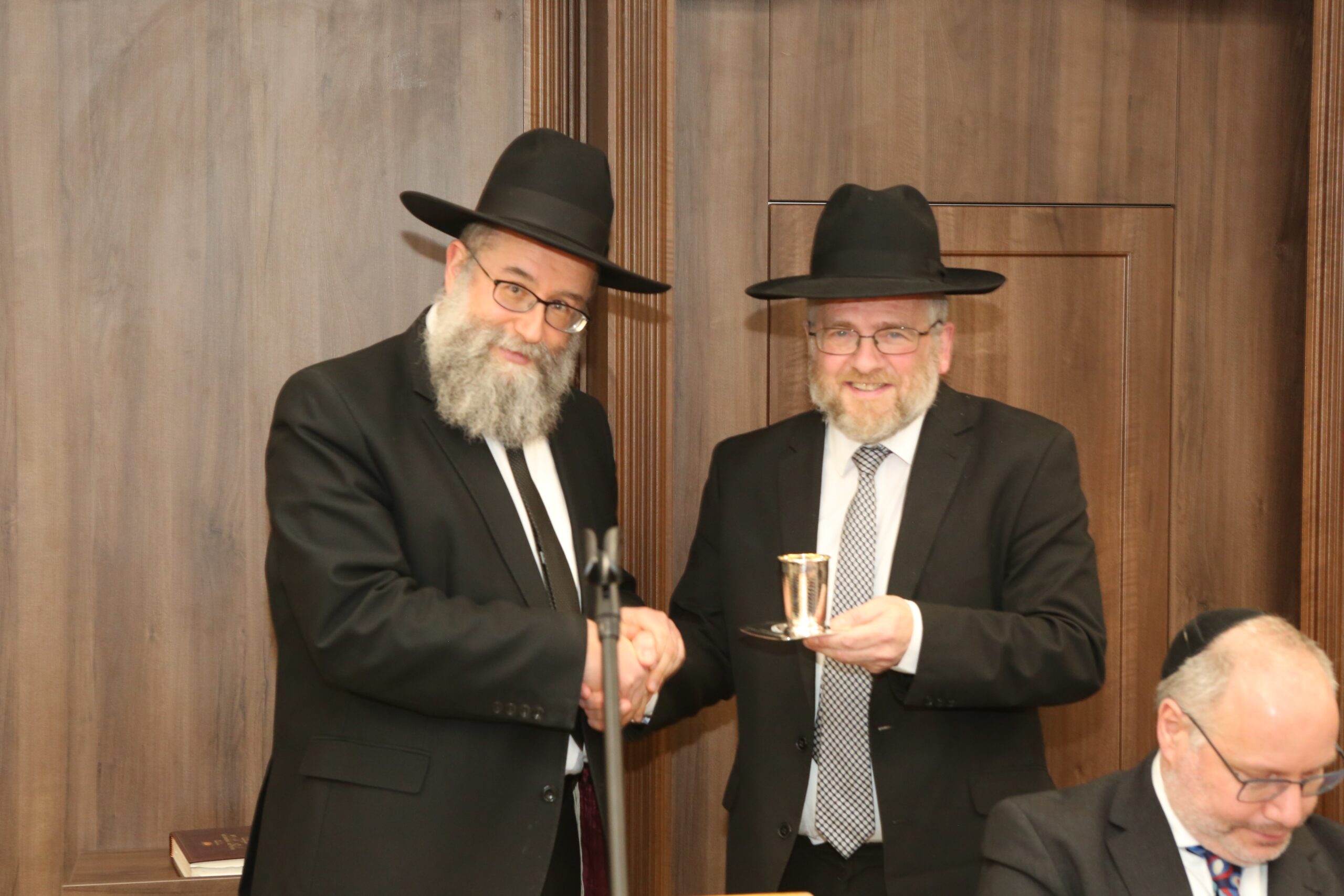 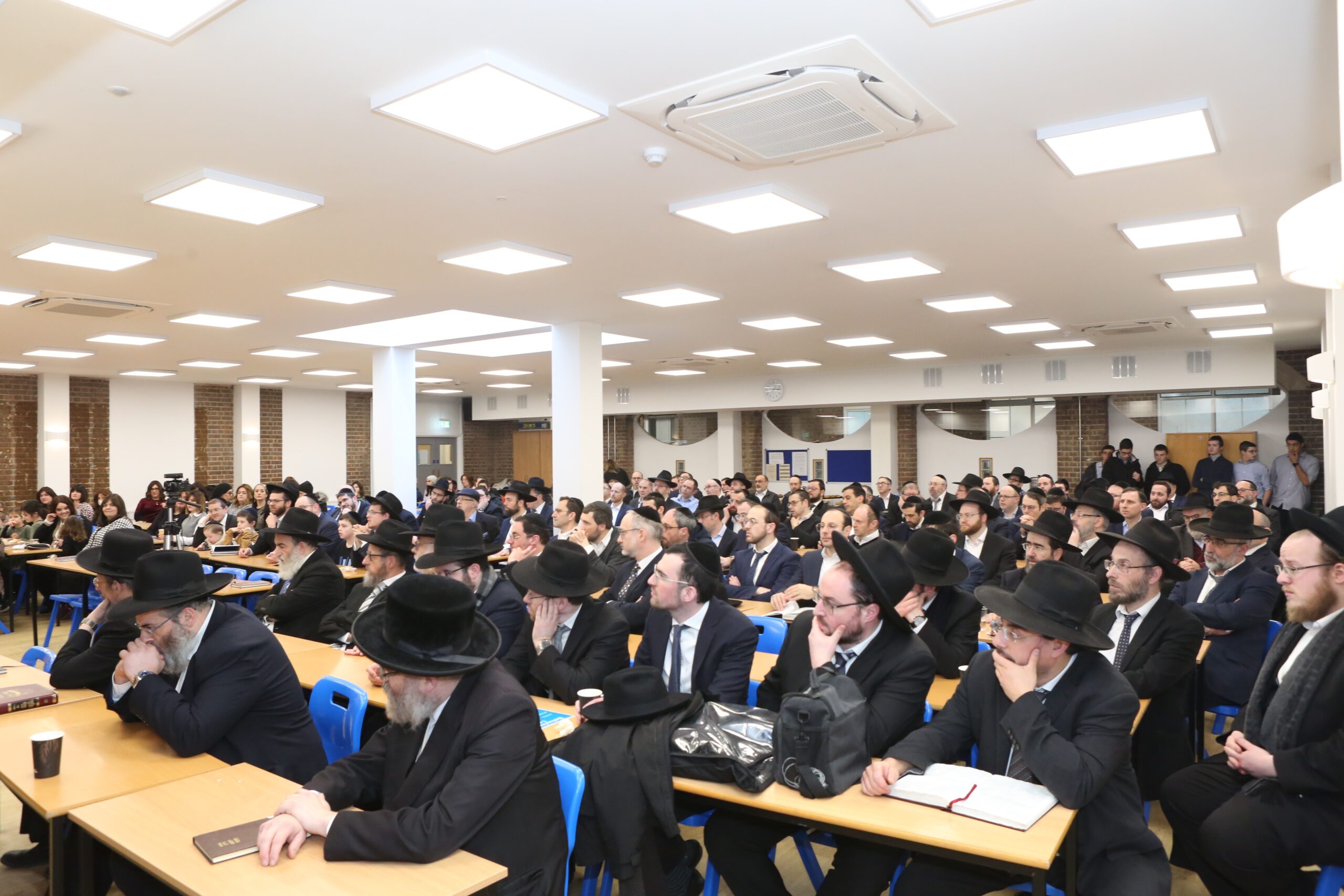