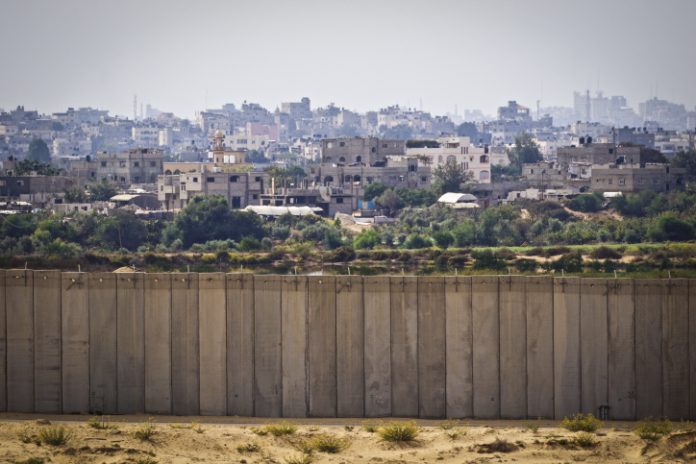 Four Israeli soldiers were injured on Saturday afternoon after an improvised explosive device was detonated close to the Gaza border fence.

The incident occurred when Engineering Corps and Golani Brigade soldiers were clearing the road and saw a Palestinian flag hung on the border fence. As the soldiers attempted to remove the flag, the hidden device exploded.

In response to the incident, the most severe since Operation Protective Edge and the first time Israeli soldiers have been injured since December 2014, Israeli fighter jets attacked eighteen Hamas military targets, according to the Israeli military. “Eight targets were attacked in a military compound near Deir el Balah, which belongs to the Hamas terror organisation, including weapon-manufacturing and training infrastructures,” it said in a statement. Israeli forces also targeted an underground tunnel in the Zaytun area and military compounds near Deir el-Balah and Khan Yunis.

Although no groups in Gaza claimed responsibility for Saturday’s explosion, Hamas officials in Cairo have reportedly informed Egyptian intelligence that the Popular Resistance Committees were responsible. The Israeli military holds Hamas accountable for all violence directed towards Israel.

Hamas’s military wing, Izz ad Din al Qassam, claimed on Saturday night that it had used anti-aircraft missiles against Israeli jets. The IDF declined to comment on the claim.

Later that same evening, missiles were fired from Gaza and a house in Sha’ar Hanegev in southern Israel was damaged.

Southern Command Maj. Gen. Eyal Zamir said of the escalation on the border: “Harming IDF soldiers constitutes a grave terror (attack). We will not abide by this reality of using the land around the fence for terrorism. Anyone seeking to undermine Israel’s security will be met with a determined response. We have considerable power and will not hesitate to exercise it as needed, despite our desire to maintain stability and avoid escalation.”

Palestinian reports said two Palestinians were wounded by tank fire close to the Gaza border and were taken to a hospital.

Last night a missile was fired at southern Israel. In response, Israeli fighter jets targeted “underground infrastructure in the southern Gaza Strip”. Palestinian media reported that heavy damage was caused by ten airstrikes but no injuries were sustained.