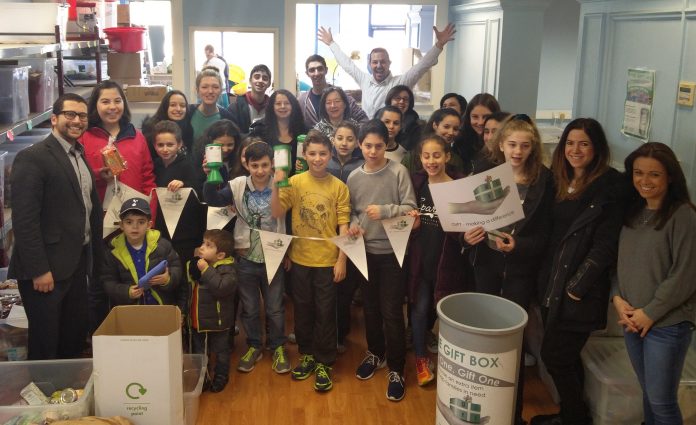 Boasting the largest population of teens under the age of 20 in the United Kingdom, it has enjoyed an astounding transformation over the past two decades.

With young families aplenty – 70% of members are now under the age of 40 – and shul membership doubling to over 1000 families, these are heady times for the shul.

Rabbi Yitzchak Schochet is its charismatic spiritual leader and will reach the milestone of a quarter of a century of service next year.

Currently the longest serving United Synagogue minister, this larger-than-life figurehead is a headline grabber in his own right as an acclaimed writer and inspirational speaker.

Hailing from Toronto, he follows in the footsteps of two centuries of rabbis.

Rabbi Dov Yehuda Schochet was his paternal great-grandfather, and in a distinguished career, he led the Basel community and was Chief Rabbi of The Hague in The Netherlands.

Rabbi Schochet’s mother, Yeti, still lives in the provincial capital of Ontario City, and she also comes from a family steeped in community leadership.

Aside from spiritual and lay influences, Rabbi Schochet has charted his own path on the back of his philosophical Chabad background.

His spiritual sojourn started in Toronto, then at yeshivot in the United States, prior to attaining semichah at Lubavitch headquarters in New York in 1988. He gained a master’s degree in Jewish Studies from University College London six years later.

After having served Oholei Torah Boys School in New York as assistant principal, Rabbi Schochet was rabbi of Richmond Synagogue for two years, when he also taught Advanced Jewish Studies at Jewish Free School, prior to taking up the Mill Hill post in 1993.

And the 28-year-old Rabbi Schochet had giant boots to fill as he succeeded Rabbi Shlomo Cutler following the latter’s retirement after 33 years of service to the shul.

Historically, a small group of residents set up the synagogue in June 1949, Shabbat services taking place at a founder member’s home on Watford Way.

Thirty tickets were sold for the inaugural High Holiday services in Hartley Hall.

The first permanent building was a house previously owned by a member of the WD & HO Will’s family (famous for ‘Wills’ cigarettes and later ‘Imperial Tobacco’) in Sylvan Avenue.

Planning permission was approved for use as a shul with seating for 75 people in September 1951. Within a year membership reached 75 families.

By the end of the decade, after Dayan Dr M.S. Lew consecrated the shul was in 1955, a ‘temporary’ prefabricated arch-roofed single story building was erected in the garden.

This structure served the community for over for over five decades in various guises.

Rabbi Cutler, Reverend at the time, had been engaged as the shul’s first full-time minister. His induction took place in May 1960.

By the late ‘60s, plans were afoot for a purpose-built synagogue seating over 400 members on the site of the original house at a cost of approximately £35,000.

The community celebrated its golden jubilee with a special dinner in 1999 and embarked four years later on its most ambitious plan to build a multi-purpose communal building.

Further refurbishment has taken place in recent years, transforming the synagogue to its present standing serving the community for a range of services, events and simchas.

Rabbi Schochet felt a “real connection” to Mill Hill shul back in ’93.

“There was incredible potential,” he recalled. “But a rabbi always runs the risk of getting bored, so he moves on or a community becomes something new and that has been the reality.”

Focusing his energies on programmes, membership and body of the shul, which stood at around 450 families, the Mill Hill community has enjoyed exponential development.

To cater for the growth of children within the Mill Hill community, Etz Chaim Jewish Primary School opened in 2011 less than a mile from the well-established Mathilda Marks-Kennedy primary school. And after a sustained effort, the much anticipated Eruv went live in the summer of 2015 to further serve an increasing Orthodox community.

To keep pace with the times, Rabbi James Proops was appointed assistant rabbi three years ago. He was charged with overseeing social and educational programmes for children and young families. With support from his wife, Sarah, this dynamic couple has been a great success.

“The community is growing and has a vibrant atmosphere, but it can be a challenge engaging members beyond Shabbat morning,” Rabbi Schochet explained.

“My primary philosophy is not always about getting people in through the shul doors. If that means creating programmes to engage members in their homes, then so be it.”

Rabbi Schochet has served on the Chief Rabbi’s Cabinet and describes his relationship with Lord Sacks and Chief Rabbi Mirvis as “excellent.” However, he will not tow the party line.

“I won’t endorse a Chief Rabbi’s position on, say, Israel or on a school admission policy if I don’t agree with something,” he said. “I will express so publicly and have had the riot act read. There have been pockets of tension but overall the relationship has been excellent.”

Rabbi Schochet is a huge fan of mauithai, but away from this extreme form of martial arts, a chance meeting with the editor of a newspaper kick-started a burgeoning writing career, especially his ‘Ask the Rabbi’ column for the better part of 20 years, which now is a feature of The Jewish Weekly.

So how did his ‘Ask the Rabbi’ feature become so popular?

“It started off as an experiment, then became the subject of Friday night and Shabbat lunch conversations,” he recalled.

“Everyone has questions and some answers are sugar coated, but that’s not my style. I’ll handle any questions and won’t hesitate to be blunt in my responses.

“There are always going to be socially sensitive subjects, and one wants to offer an authentic Jewish response whilst at the same time being understanding to the questioner, or others you know are reading it, without causing offence. Inevitably though, you are going to upset some people. I might not be able to change a Biblical prohibition but it does not mean that I have to be insensitive, so it’s about getting a balance.”

Rabbi Schochet’s website – rabbischochet.com – receives hundreds of hits daily and has helped generate a boom in lectures at home and abroad.

Given a choice between a shul sermon and a guest lecture, Rabbi Schochet chooses the latter.

“On an average Shabbat you have to make a maximum impact in minimal time,” he explained. “I believe in using humour or anecdotes, keeping it to no more than 12-13 minutes, and if it’s not engaging before the third minute, you are wasting your time -you’ve lost them.

“Twice a year however, before Pesach and Yom Kippur, I give a longer talk, and people walk away saying ‘wow.’ Unlike on Shabbat, I have time to bring in more themes. It’s like giving a guest lecture when you take people on a journey and no topic is off limits.”

Further afield, Rabbi Schochet has views on the challenges ahead for United Synagogue to keep the next generation of Jewish youngsters engaged.

One area in particular is the advent of social media, but this is one rabbi who embraces it.

“The US has made a wonderful effort with Tribe, but some things remain a little out of their hands because the enticements of modern day society are ever increasing,” he explained.

“The isolation of the average teen with social media is a developing issue. It becomes more difficult to engage them into some kind of environment where you can expose them to something exciting about their heritage so they may retain that identity as they go forward.

“Social media, like everything, can go either way, as there is unbelievable peer pressure. Ignorance can be bliss but you now know everything going on in a person’s life, and when you confront that, you feel under pressure.

“Nevertheless, social media is a fantastic means for marketing programmes.

“We have Facebook and Twitter pages for the Mill Hill community so you can reach out to engage, and for those who choose not to come along, I use Facebook Live (to video stream) so people can tune in.

“If you can’t get youngsters into the shul door, you have to take the shul out to them, and social media has provided an unprecedented opportunity so you have to embrace it.”

Looking ahead, Rabbi Schochet is as always upbeat.

“I believe that Mill Hill will continue to grow in strength,” he enthused. “There is always a peak you will hit, there will always be challenges to accommodate, but whatever we have accomplished, we will double our efforts going forward.”