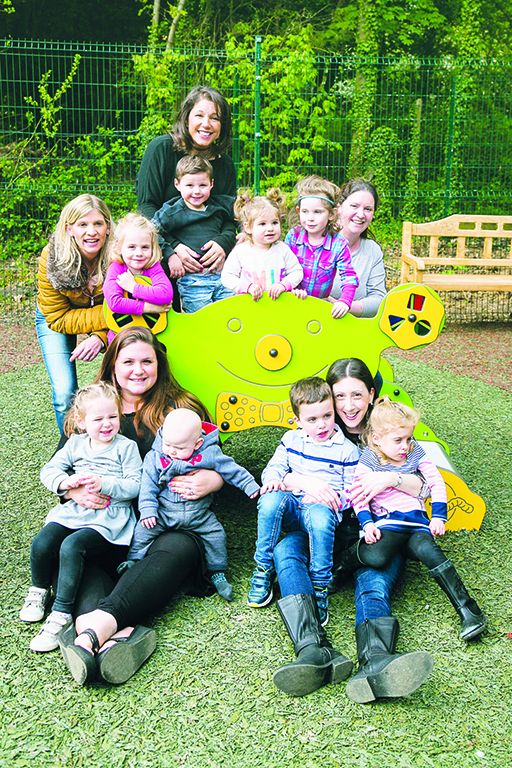 Five wonderful mothers from Shenley have managed to achieve something amazing for children and parents in the local area. Through their incredible hard work, determination and fundraising they raised a staggering amount of money to build The Shenley Park Toddler Area.

“The whole thing started when Sophie (Burnham-Miller) posted something on a Facebook group about the park at the Shenley Tea Rooms,” Linzie Barr explains “I had actually visited the park myself with my youngest son, Jacob, and had always thought that something for toddlers and young babies would be great, so I got in contact with her and said I would like to help, and things started moving from there…”

They approached The Shenley Park Trust Director, Glyn Dredge, about the park. They explained that the wood chip and some of the play equipment were not suitable for toddlers and young babies, and that a separate area for this age group would be ideal. Whilst Glyn agreed with them to some extent, the main issue was that to do this would be very expensive, and unfortunately they just did not have the funds.

Not to be put off by a small thing like lack of funds, Sophie and Linzie, along with other local mothers, Fiona Twitchett, Emma Simons, and Jackie Forster decided that they would try to raise the money themselves and set a target of £10,000. Incredibly, they managed to raise this money reasonably quickly, and they decided to continue to raise more money so that they could buy more suitable play equipment and a safer rubber mulch surface as well.

In order to raise money, they organised a wide range of amazing events for all ages within the local community. Their first event, a Family Fun Day, was extremely successful. They went on to organise many others, including a Zumba fundraiser and a Toddler disco party complete with a “Shenley’s Got Talent” competition. Hertsmere’s mayor, Pete Rutledge, even volunteered as a judge for the event and was very supportive of the women and the project throughout. Thanks to all their amazing fundraising efforts, they managed to raise over £27,500, which is a very impressive amount.

The women were all overwhelmed by the support from local estate agents Shenley Estates, who sponsored many of the events, to larger organisations such as The Arsenal Foundation and Tesco Bags of Help initiative. All helped them to reach their goal.

Linzie explains, “The support from the community and local businesses has been amazing. We really could not have done this without their help, and we really appreciate everyone that has been involved in this project.”

After months of hard work and anticipation, the Shenley Park Toddler Area was officially opened on 29 April of this year. Pete Rutledge was there to cut the ribbon along with local MP Oliver Dowden, who were both really impressed at how much the group had achieved. There were also some familiar faces `at the proceedings for the younger ones in the shape of Anna from Frozen and Peppa Pig.

Shenley Park Toddler Area, which is situated behind the current play area, near to Shenley Tea Rooms/Orchard cafe, is now a safe, secure and fun environment for young children and babies to play in and enjoy. A plaque on the gate of the play area acknowledges the ladies’ efforts, and it reads “This Park was initiated by local mums and has been donated to the Shenley Park Trust.”

It was very much a group effort with all five women using their own skills and experience to help in different areas of the fundraising and planning. They have now become great friends, often meeting up socially, and are already planning Phase 2 of the project. These determined mothers are planning to purchase special mother and baby swings and floor-level inclusive roundabouts for buggies and wheelchairs, so that even more young children and parents can enjoy the playing in this park.

If this has inspired you, and you would like to know more about this worthy cause, please contact Linzie Barr on 07956 857 589 or join their Facebook group Shenley Park Toddler Area Project –
www.facebook.com/groups/855049127938773/