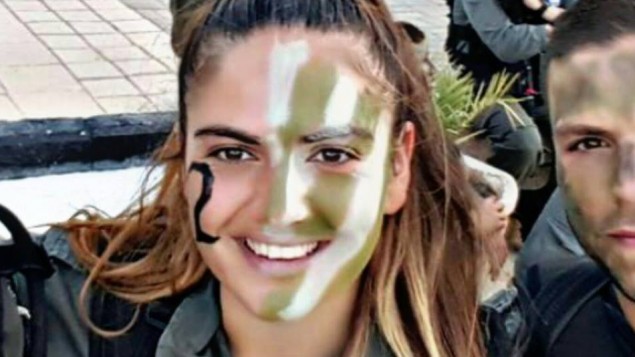 The prime minister blasted the Palestinian Authority and its ruling Fatah party on Sunday for its failure to condemn last Friday’s terror attack at the Damascus Gate and called for intensified international pressure on the Palestinians to end stipends to terrorists’ families.
Binyamin Netanyahu noted that rather than condemn the Palestinians who killed Border Police officer Hadas Malka, PA President Mahmoud Abbas’s Fatah movement “issued a statement in which it condemned Border Police officers for killing the terrorists and praised the murderers as heroes.”
Minutes before being stabbed to death by a Palestinian terrorist, Staff Sergeant Major Hadas Malka, 23, of Moshav Givat Ezer in central Israel, sent her close friends a final smiling selfie wishing them a Shabbat Shalom.
Then three West Bankers, armed with an automatic weapon and knives, carried out simultaneous attacks at two adjacent locations. Two attacked a group of police officers at Zedekiah’s Cave with an automatic weapon and knives, and a third stabbed Malka a short distance away at Damascus Gate.
The attackers were identified by the Shin Bet internal security agency as Bra’a Salah and Asama Atta, both born in 1998, and Adel Ankush, born the following year. All three were members of Palestinian terrorist organizations and were shot dead by security forces as they carried out their attacks.
The 23-year-old staff sergeant died of her wounds at Hadassah Hospital in Mount Scopus and was laid to rest last Saturday night in Ashdod. Four other people were lightly and moderately injured in the attack, including a policeman and two East Jerusalem Palestinians. Some reports said the gun used by the attackers jammed, preventing further casualties.
Fatah condemned “the war crime carried out by Israeli occupation forces in Jerusalem against three Palestinian teens,” spokesperson Osama al- Kawasme said in a statement. Fatah added that “the international community’s silence emboldened Israel to further spill the blood of Palestinians.”
Netanyahu expressed outrage at that narrative, saying “Apparently there is no limit to (their) lies and gall. The Palestinian Authority, of course, refuses to condemn the murder, and the same authority will now pay reparations to the families of the murderers. I call on world nations to denounce the murder and those who glorify it, and to demand immediate cessation of payments by the PA to the families of terrorists, action that only encourages terror.”
Israel and the US have been pressing the PA to end payments to the families of terrorists jailed for attacking or killing Israelis. Palestinians have said halting stipends is out of the question.
Israeli officials say Palestinians have paid out some NIS 4 billion (£0.85 billion) over the past four years to Palestinian prisoners and “martyrs” killed during attacks against Israel. Jerusalem insists the policy is a major incentive to would-be assailants to carry out attacks.
Netanyahu said security forces were preparing to demolish the homes of the three terrorists in the West Bank village of Deir Abu-Mashal. He added that he had cancelled Ramadan visits to Israel for West Bank Palestinians and had instructed police to bolster security in the Old City.
The terrorists bought their weapons themselves, and one of them was active in distributing nationalistic and religious content on the internet.
They worked in East Jerusalem. Minutes before breaking the fast of Ramadan, while many Muslims flock to the street to feast, it was easy for them to mix with the crowd without Israeli security forces noticing them.
To add insult to injury the original BBC news report was titled, “Three Palestinians killed after deadly stabbing in Jerusalem.” The headline omitted the fact that the three perpetrators operated in two different scenes and were neutralized after they attempted to assault Israeli policemen and killed Staff Sergeant Major Hadas Malka.
US President Donald Trump’s son, Donald Trump Jr., took to Twitter to criticise the BBC for its misleading headline. He wrote in response, “You mean after they stabbed a female Israeli police officer to death… right? This is as close to being misleading as possible,” he charged.
Prime Minister Netanyahu had reportedly requested that Yuval Rotem, the Director General of the Ministry for Foreign Affairs, as well as the Israeli Embassy in London, both act to have the BBC acknowledge that the headline misrepresented the details of the attack. Within two hours the headline was changed.
Both Hamas and ISIS claimed responsibility for the attack, but the Islamic Hamas movement based in the Gaza strip dismissed the claim by ISIS and said all three assailants were members of Palestinian organisations – two were from the Popular Front for the Liberation of Palestine.
Hamas like Fatah condemned the shooting of the three attackers as a “crime by the occupation.”
Over the past 18 months the Old City and the Damascus Gate in particular have seen several attacks by Palestinians and, in one case, a Jordanian national.
Since September 2015, mainly Palestinian assailants have killed 43 Israelis, two visiting Americans and a British student, mostly in stabbing, shooting and vehicular attacks. In that time, some 250 Palestinians were killed by Israeli fire, a majority of them attackers, according to authorities.
Israel has blamed the violence and terrorism on incitement by Palestinian political and religious leaders compounded on social media sites that glorify violence and encourage attacks.