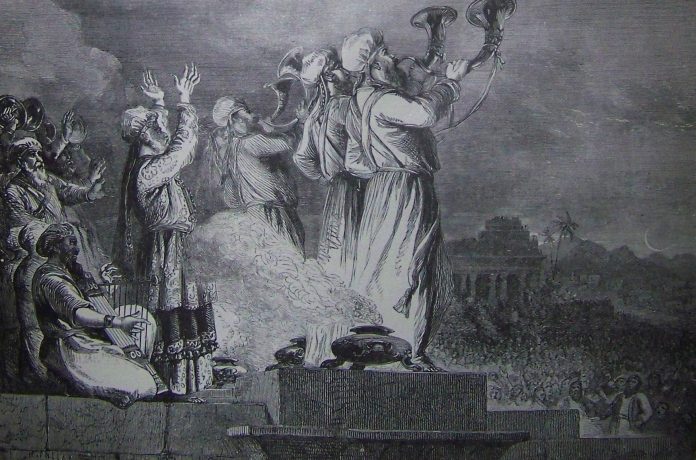 We are now in the month of Nissan. Last week on Parshat Hachodesh we read of the significance of Nissan as “the head of the months”. Rashi explains that G-d instructed Moshe in regards to “Kiddush Hachodesh”. This is nothing to do with a kiddush in shul after the Service on Shabbat Mevorchim, rather it refers to the sanctification of the New Moon by the Sanhedrin. This was done after interviewing witnesses who claimed to have seen the birth of the New Moon. The Jewish Calendar is in fact a “lunar one”. This is based on a “lunar month “being approximately 29 and a half days long. Thus a Jewish month has either 29 or 30 days. This makes the sum total of days in a Jewish year approximately 354. This is about 11 days less than a “solar year” which as everyone knows is 365 (and a quarter) days. Thus we have the ingenious device of a “leap year” whereby an extra month is inserted 7 times in 19 years. Thus Pesach is always in the Spring! The Moslem Calendar is also lunar but does not have the “correction” of a leap year. Thus Ramadan gets “earlier” every year and is currently at the height of summer (in the northern hemisphere.)
The Jewish people are compared to the moon. The moon waxes and wanes- or at least appears to. We also have periods when we are like a “full moon”- i.e. things are going well and at other times we are like the “new moon”. However, we have to realise that just as the New Moon will inevitably grow larger, so too when we are facing difficulties we must remember that things will eventually get better. Thus it would be appropriate to wish all readers a Shana Tovah-Happy New Year!