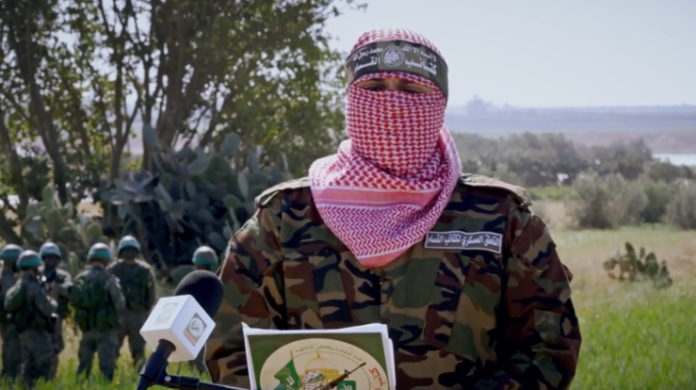 Hamas has told Israel there is a “real chance” to negotiate the return of MIAs and POWs but a window of opportunity will soon shut.

He added that the Israeli government continues to lie about MIAs.

Hadar Goldin and Oron Shaul died alongside four IDF soldiers and are believed to be held by the terror group.

Prime Minister Benjamin Netanyahu declared during the ceremony that Israel would bring back the bodies of the soldiers, and two citizens, Avera Mengistu and Hisham al-Sayed, held by Hamas.

Netanyahu had a stark warning for Palestinian factions in the Gaza Strip during his speech.

“We are working to achieve calm, but we are prepared to embark on a campaign, an extensive military operation to strike Hamas and Islamic Jihad,” he said.

“Those who are involved in these preparations, who are sitting here today, know very well that these are not mere words.”

Goldin and Shaul died in the Shuja’iyya neighbourhood of Gaza City when an armoured personnel carrier was hit by an anti-tank missile.

Hamas claimed it seized Oron and Hadar but did not state if the soldiers were alive or dead.

The IDF declared the two had died shortly after the incident.

Meantime, Israel has started demolishing over 72 apartments in 12 buildings near a military barrier on the outskirts of Jerusalem on Monday after a year-long legal battle.

“The petitioners took the law into their own hands when they began and continued building structures without receiving a special permit from the military commander,” a three-judge panel explained.

An IDF statement said enforcement would be take in “operational considerations” and “State policy.”

Israel says the buildings were built illegally by Palestinians too close to the West Bank separation barrier.

The landscape is complicated as part is outside municipal boundaries of East Jerusalem but on the Israeli side of the barrier.

Residents claim they cannot get permits to build homes legally.

Criticism came from The European Union who said in a statement the policy undermined viability of a two-state solution and a lasting peace.