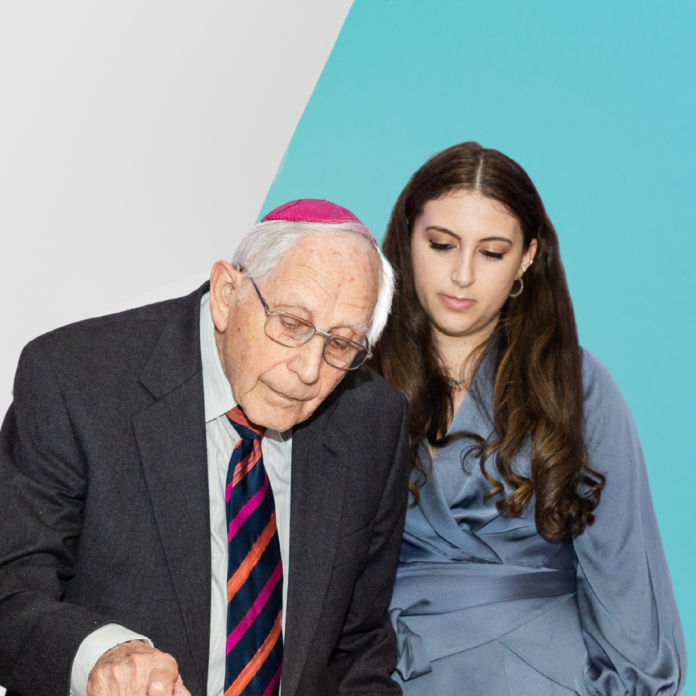 Over 400 people, including some of the original ‘Boys’ and their children, grandchildren and even great grandchildren from all over the world, as well as dignitaries and representatives of other Holocaust-related organisations, attended a reunion dinner celebrating the 77th anniversary of the Boys’ liberation on Monday night at the glittering Meridian Grand in Edmonton.

The event was organised by a team from the ’45 Aid Society’s 2nd generation, headed by Chairman Angela Cohen MBE and Vice Chairman, Philip Burton. The venue was filled with music, dancing and the laugher and celebration of the survivors and their families, having been unable to hold their annual reunion dinner for 2 long years, due to the Covid pandemic. They were joined by a number of dignitaries, including long-time friend of the ’45 Aid Society, Lord Eric Pickles, Rachel Maclean MP (Minister for Safeguarding for Women), Tim Kiddell (Private Secretary and Speechwriter) and former MP Joan Ryan (former Labour MP for Enfield North).

After a minute’s silence, the evening’s festivities began with joyful and uplifting performances by acapella group, Jonah and the Wailers, followed by Israeli dancing with Shir music band and a fascinating film about the ’45 Aid Society’s recently launched website archive, which is now being used globally as a definitive resource on the history of the Boys.

The highlight of the evening was an in-depth interview with two of the Boys, Harry Spiro (together with his daughter Tracey Moses) and Mala Tribich, talking about their experiences during and after the Holocaust with 3rd generation TV personality and Holocaust educator, Robert Rinder.

Harry and Mala’s message to the audience and future generations was a united one: they made sure never to instill hate or revenge in their families as they felt it served no purpose, but the vital lesson going forward is the importance of continuing to educate future generations about the horrors of the Holocaust to ensure that it never happens again: a message that resonates more than ever with the terrifying rise of antisemitism across the world and the recent war in Ukraine.

Chairman of the ’45 Aid Society, Angela Cohen, said: “We were thrilled and overjoyed to see so many of our wonderful Boys and their families reunited at last after so long apart. The room was filled with joy and love and celebration, something that our Boys have instilled in their families and they are an inspiration to everyone around them. We are equally proud of our 2nd and 3rd generation who are continuing their parents’ and grandparents’ legacy by telling their stories and giving talks around the country, recognising that education is the only way to prevent these horrors from happening again. We look forward to getting together again next year to celebrate the 78th anniversary of the liberation of the Boys!”