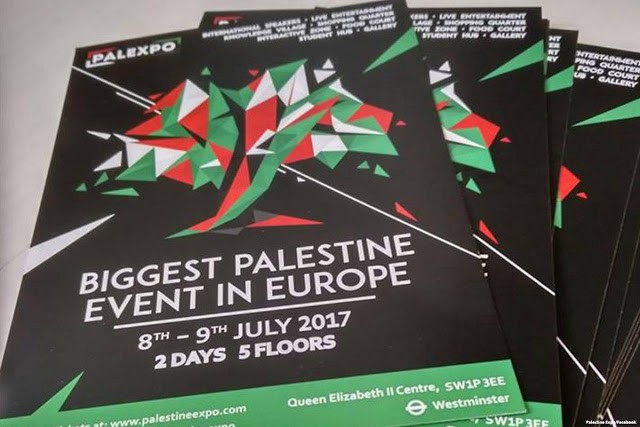 Several Jews were evicted from last weekend’s “cultural and family event”, known as Palestine Expo, at the Queen Elizabeth II Centre (QEII) in London.
When Jason Silver sat down to eat lunch, which was included in the price of his ticket, and placed a kippa on his head, he was asked to leave. The incident, which was captured on video and went viral on the internet, showed the organisers asking a security guard to remove Mr Silver. Police were called when he insisted that all he was doing was eating lunch, noting that he had been there for three hours and that it was when he put on his kippa that he was asked to leave.
Elsewhere Mr David Collier sat down to eat lunch without a kippa, but with his wife and child, and was spotted by members of a local anti-Israel group called “London Palestine Action.”
“I saw an activist called Andrew Nelis before he saw me,” said Mr Collier. “I then saw Jackie Walker enter the room and start talking to him. They began looking over in my direction. Then Tony Greenstein showed up. I am never confrontational, never impolite.”
However, he explained that he then walked over to them and said, “Yes, this is me.” Mr Collier said they looked at each other and that Greenstein did not believe he was there for the food. But he returned to his seat and his family. The three men then walked over with security guards to the long table where the Collier family were eating and asked them to leave, which they did.
David Collier said “I am now considering a civil suit against the QEII building as I am a member of the press, who was being evicted on discriminatory grounds.”
The pro-Palestinian event was almost cancelled after Communities Secretary Sajid Javid was concerned that the organisers, Friends of Al Aqsa, had links to terror groups such as Hamas and Hezbollah. But in the end the event was given the go ahead and billed as “the biggest social, cultural and entertainment event on Palestine to ever take place in Europe.”
Speakers included anti-Zionist Israeli-born Ilan Pappe and Miko Peled, journalists Ben White and Peter Oborne and controversial former National Union of Students president Malia Bouattia.
Also appearing was Iyad Burnat, who has previously been denied entry to the UK blaming the “Zionist lobby” and had previously post a series of incendiary messages comparing Benjamin Netanyahu to Adolf Hitler and Zionism to Nazism and ISIS.
Sheikh Ebrahim Bham, an Islamic preacher from South Africa who had previously delivered lectures in which he compared Jews to “fleas,” was also booked to speak on both days of the controversial conference in Westminster.
Those who attended included members of the Palestine Solidarity Campaign (PSC) and the Palestine Return Centre that ran an event where Gerald Kaufman suggested Jewish money controls the UK government.