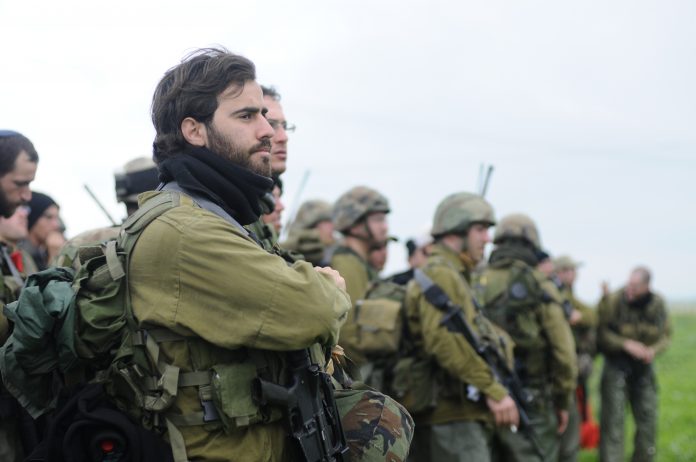 Israel Defence Forces along with a team from the Border Police traced and arrested a 17-year-old Palestinian girl on Monday night who was filmed kicking and punching two Israeli soldiers in an attempt to provoke a reaction, whilst Human Rights Groups were recording the incident.

The scuffle which took place last Friday, occurred in the West Bank village of Nabi Saleh when the girl named Ahed Tamimi and her friend confronted the two soldiers filming with their phones and began shouting, punching and kicking them. They were soon joined by three other Palestinians, one believed to be her mother and all five began pushing the soldiers back.

The IDF said the soldiers acted “professionally” in not reacting to the slaps. Although in a statement, the military pointed out they were perfectly entitled to make arrests because they “used physical violence and prevented soldiers from carrying out their duties.”
According to the Palestinian Ma’an News agency, the IDF confiscated mobile phones, laptops and cameras from the Tamimi home when the arrest of the one teenager took place.

The incident comes after BBC Match of the Day Presenter Gary Lineker re-tweeted a video by the radical anti-Israel journalist Ben White showing Israeli soldiers rounding up young Palestinian teenagers and throwing them into what appeared to be a cage. The former Leicester Everton Tottenham and England striker wrote the words “disgusting” alongside the video which of course went viral.

However as is the case with many of these Human Rights Organisations, the video was conveniently edited to cut out the earlier part of the film showing the children as young as 12-years-old throwing rocks and molotov cocktails at passing cars, police and soldiers. The order was then given for soldiers to arrest the Palestinian stone-throwers, although they were detained for only a short time. However, what appeared to be a cage was actually a holding cell with a spiral door and the teenagers were huddled at the front for the cameraman to make a “good ending” to his video.

The village of Nabi Saleh is a regular staging ground used by Human Rights organisations for provoking clashes with Israeli soldiers and the Tamimi family have a history of being involved in previous violence incidents.

One of the most reported cases was back in August 2015 when an IDF soldier was caught on film trying to arrest 12-year-old Muhammad Tamimi, who had been throwing rocks during a violent protest.

In the footage, the soldier restrained the boy, whose arm was in a cast, but a group of women and children, including Muhammad’s sister jumped onto the soldier repeatedly kicking and punching him while he was still holding down the boy with his arm around the Palestinian’s neck. The soldier also got his hand severely bitten by the kid.
This video also went viral online, drawing millions of views from across the word.