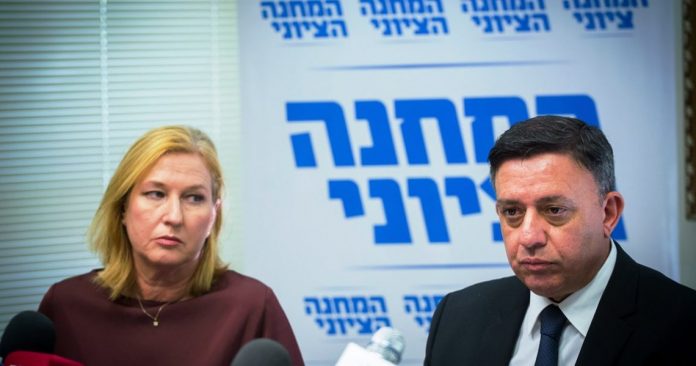 The leaders of Israel’s Kulanu and Yisrael Beiteinu parties have ruled out joining a future government led by Zionist Union leader Avi Gabbay.
Finance Minister, and Kulanu leader, Moshe Kahlon said: “I can say in the clearest way possible: We will not all be a fig leaf in a leftist government… I am a member of the national camp, unlike the Labour Party. Therefore, I do not see any situation in which we all join the leftist Labour government.” In what appeared to be a coordinated move, Defence Minister and Yisrael Beiteinu leader Avigdor Lieberman said his party would not work with Gabbay.
In an interview with Army Radio Gabbay ruled out working with Yisrael Beiteinu. He said: “Lieberman is the forefather of the problematic right-wing… I said he’s the last one I’ll talk to, so he can rest easy.”
There has been recent speculation that Gabbay is hoping to recruit Moshe Ya’alon, Lieberman’s predecessor as Defence Minister, into the Zionist Union.
At last weeks Zionist Union faction meeting Gabbay told colleagues that “when we win 30 seats, everyone will want to be a part of our coalition”. He added that “the only thing [Kahlon and Lieberman] achieved is to give the public the correct notion that the next government will be a centre-left one led by myself”.
Since Gabbay took over the leadership, the Zionist Union appears to be increasing in popularity. Polls published last weekend by the two leading TV news channels showed the Zionist Union closing the gap on Likud putting the Zionist Union at 21 seats and the Likud at 24. The other centrist party, Yesh Atid, led by Yair Lapid, is also continuing to gain ground.
Elections are not due until November 2019.