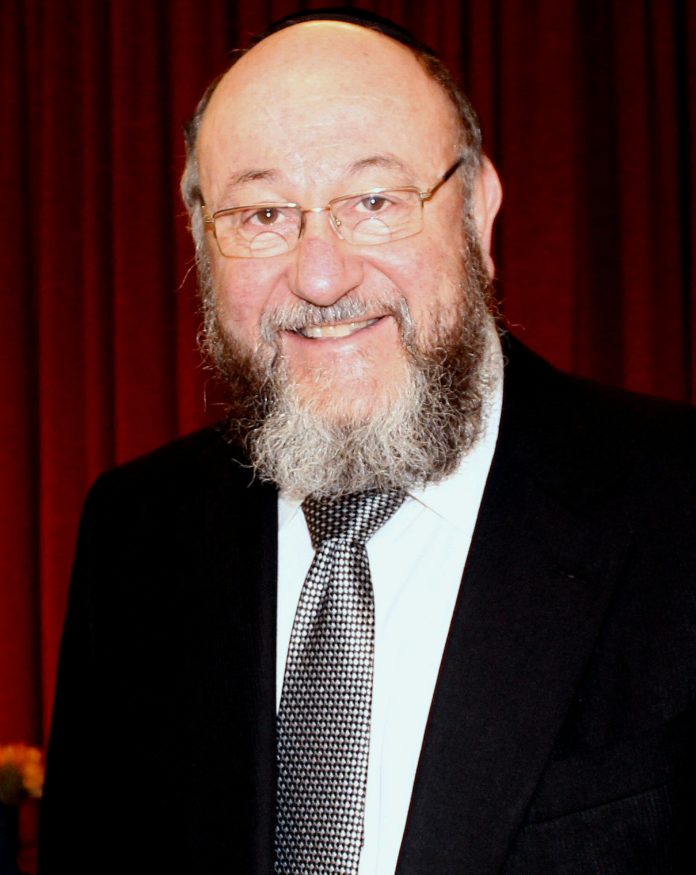 Prominent UK Dayanim and Rabbonim are at odds with Chief Rabbi Ephraim Mirvis over his recently published guide on handling LGBT questions in Orthodox Jewish schools.

The esteemed clergy backed the viewpoint that no child should suffer bullying, regardless of his/her inclinations, and it was correct for schools to ensure qualified staff could counsel pupils.

But there is concern that the Chief Rabbi’s message could be perceived to be “a relaxing of the Torah’s attitude towards alternative lifestyles (relationships), whereby compassion and other inter-personal obligations supersede Torah Laws relating to relationships.”

It is this misconception that they have felt compelled to clarify to the Jewish public.

“Whilst society at large in a relatively short period of time has accepted and even embraced alternative lifestyles, and whilst we recognise that UK law has been changed recently to reflect society’s changed values, one of the fundamental principles and tenets of the Jewish Faith is that all laws and practices of the Torah are eternal and immutable, regardless of how modern society may view them,” they noted.

“Accordingly, we state unequivocally that any intimate physical relationship other than that between a married male and female, is totally, strictly and absolutely forbidden according to Jewish Law.”

The release of the letter comes days after a hard-hitting document – ‘A Critique Of The Chief Rabbi’s New LGBT Guide for Orthodox Schools’ – produced by Rabbi Mordechai Rose of Chinuch UK, slamming the Chief Rabbi’s approach towards LGBT in Orthodox schools.

Rabbi Rose states there is “nothing wrong” with the Chief Rabbi’s aim, but he is concerned it was written with KeshetUK, an organisation he describes as inappropriate in presenting the Orthodox Jewish view on the delicate and complex subject of homosexuality.

“They are an organisation dedicated to promoting the acceptance of the LGBT lifestyle within the Jewish community,” he states.

“They help organise the Jewish presence in Gay Pride parades and celebrate when Jews come out as gay or lesbian.

“In their own eyes, they are committed to a worthy cause. But obviously the Orthodox Jewish view on these matters is fundamentally different from theirs.”

Rabbi Rose likens the collaboration of the Chief Rabbi with KeshetUK to the United Synagogue collaborating with the Reform movement to produce a definitive guide to Jewish religious belief.

Rabbi Rose is concerned that representatives from KeshetUK will play a major role in educating teachers in United Synagogue schools on how to deal with students seek guidance.

He explains that the general approach recommended by the booklet allows students to define their sexual identity as heterosexual, homosexual or bisexual and their gender as male or female based on feelings, regardless of biological gender.

Students can also declare themselves as being gay, lesbian, bisexual or transgender because that is how they feel and should be accepted as such; they should be made to feel comfortable with their chosen sexual orientation and helped to fulfil themselves in Jewish life with this identity.

The booklet also stresses that it is wrong to recommend therapy to help them assume a heterosexual orientation.

Rabbi Rose provides quotes from the booklet and whilst acknowledging that young people’s struggles must be handled with “great sensitivity and wisdom”, he is fervently against a booklet modelled on a modern secular world-view that accepts and validates LGBT relationships.

Rabbi Rose states that publishing statements from LGBT students about their experiences in Orthodox Jewish schools has damaged the image of Orthodox schools.

“These quotations tend to represent traditional Orthodox education as insensitive and narrow in its approach,” he explained.

“In addition, the booklet states clearly that the bullying of LGBT pupils in Orthodox Jewish schools is a serious problem which up till now has not been dealt with properly.”

The booklet’s release resulted in a plethora of press reports in the secular press that Rabbi Rose believes were also “damaging”.

Rabbi Rose goes on to discuss what he terms ‘The Problematic Collaboration with KeshetUK’ by the Chief Rabbi.

“Given that KeshetUK’s aims and ideals are so different to those of Orthodox Judaism, it is very difficult to understand how they could collaborate successfully with the Chief Rabbi to produce a definitive guide for Orthodox Jewish schools on these delicate matters,” he notes.

“It is my opinion that it is this collaboration that has caused the Chief Rabbi to produce a booklet which on the surface seems to represent a religious approach but in actual fact promotes an overtly secular and liberal viewpoint and worldview.”

Rabbi Rose concludes by overviewing the harm caused to the orthodox and wider Jewish community by the booklet.

In terms of negotiations with Ofsted and the Department for Education who make increasing demands on Orthodox schools to teach children about homosexuality and presenting it as a valid alternative lifestyle, he notes, “We have claimed that we cannot teach these matters because they are against our religion.

“We have claimed that we do not have significant problems of bullying in our schools.

“Now Ofsted and the DfE can come with the Chief Rabbi’s booklet in their hand saying, “your own Chief Rabbi states clearly that there is a significant problem of LGBT bullying in Orthodox schools and insists that such matters must be taught and such lifestyles must be accepted.”

“Mrs. Spielman, the head of Ofsted, has constantly claimed that those opposing the requirements to teach LGBT in schools do not represent the mainstream religious view. They are religious extremists. That is her justification for ignoring the rights protecting religious freedom and imposing these requirements on our schools against our will.

“Now she has the perfect proof for her claims. She can say, “the Chief Rabbi of England, who represents mainstream Jewish Orthodoxy, agrees with me.”

Rabbi Rose is also concerned there could be an increase in homosexuality in traditional Jewish schools.

“Many young people are confused about their sexual identity especially with the onset of puberty and its powerful emotions,” he noted.

“Experts say that it is relatively common for such young people to have passing feelings of attraction to people of the same sex especially in single-sex environments.

“In the past due to the general negative attitude of society and of course of the Torah, such feelings would not be acted upon. They would pass and the individuals would later enter into successful heterosexual marriages.

“But with the more permissive approach promoted by the Chief Rabbi’s booklet, these young people are more likely to act on these transient, relatively normal feelings.

“First-hand reports of this phenomenon already having taken place have recently been brought to my attention.

“The new openness and acceptance of the alternative lifestyles promoted by the booklet is also likely to have repercussions on the wider traditional Jewish community, leading to an increase in the frequency of LGBT type relationships.

“As such it will just reflect the contemporary norms of the wider secular society we find ourselves Finally, Rabbi Rose is of the view that the booklet misrepresents the true Torah approach to a complex issue and causes widespread confusion in the wider Jewish public.

“It has been used by the secular world to back up their viewpoint that opposition to LGBT relationships is a backward and antiquated belief held only by religious extremists,” he noted.

The Jewish Weekly asked the Office of the Chief Rabbi to comment but has yet to receive a reply.