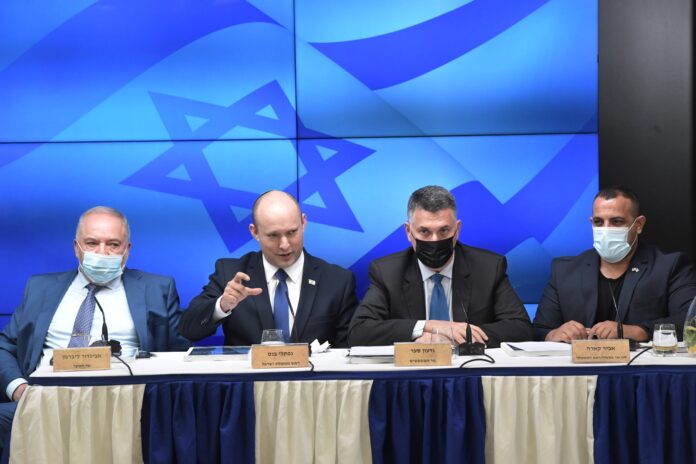 Anat Stein asks: JAMES, In “The Jewish Weekly” last week, Miri Levy asked you about the citizen’s state law, so can you explain a little more about it and the implications of the Knesset vote in the early hours of Tuesday morning?

Hello Anat: The citizen’s state law, also known as the family reunification law, blocks the automatic granting of Israeli citizenship or residency to Palestinian Arabs on the basis of marriage to an Israeli. The law was first passed in 2003 and applies for one year. Therefore the legislation has to be extended annually by a Knesset vote.

However as the government has just a one seat majority and Labor, Meretz and Ra’am expressed their reservations about extending the law, the opposition parties attempted to embarrass the government by voting against it, even though Likud, Shas, UTJ and Religious Zionists really support it.

This would in fact be the first time the Left-Centre-Right-Arab government bloc would feel the pressure since being voted in last month, as the eight parties agreed on only one issue – to oust Netanyahu.

As it turned out, Arab Labor MK Ibtisam Mara’ana put forward a compromise which included reducing the proposed extension to just six months, issuing some 1,600 Palestinian families with A-5 residency visas and establishing a committee to find humanitarian solutions to the other 9,700 Palestinians residing in Israel on military-issued stay permits.

The 6 Meretz and 4 Ra’am MK’s agreed to this and Bennett believed he had the numbers. In fact he declared that he regarded the vote “as a motion of confidence in the government.”

As the speaker called for the vote to take place in the early hours of Tuesday morning, 2 of Ra’am’s 4 lawmakers decided to abstain, while Yamina MK Amichai Chikli voted against.

The result was 59-59 which is a defeat for the fragile government and a major blow to the Lapid-Bennett coalition. The deadline for extending the legislation was midnight last Tuesday night.

Amichai Chikli is the Yamina MK who voted against the establishment of the new coalition last month, but he then said he would vote with the government on most matters, seemingly giving it a cushion.

However Chikli said he changed his mind because of the “compromise deal”.

“Tonight we received proof of the problematic nature of a government that doesn’t have a distinct Zionist majority — one that starts the night with a law extension for a year and ends it with an extension for half a year, that starts with 1,500 permits and ends with over 3,000. “Israel needs a functioning Zionist government, not a mishmash that depends on Ra’am and Meretz votes,” Chikli said.

He later added that had the original extension motion remained “without the capitulation” in his words, to Meretz and Ra’am”, he would have supported it.

In reality, it looked bad for Bennett because he can’t rely on Labor, Meretz and Ra’am. And it looked bad for Netanyahu, because right-wing opposition parties joined forces with the Arab Joint List, to deal a severe blow to Israel’s security.

Joint List celebrated in the Knesset with hugs and jumping while the government screamed at opposition MK’s for playing politics. Some of the Likud MK’s shouted back in union “Shame, Shame, Shame” towards the government for allowing such a weak government to be formed and accused them on relying on anti-Zionist votes.

The law was initially passed in 2003 after some 130,000 Palestinians entered Israel through “family reunification” between 1993 and 2003. This was during the time of Palestinian suicide bombings. The stated prime concern was that some Palestinians gaining Israeli status would engage in terrorism.

But there was also a demographic matter, as security sources suggested that around 200,000 Palestinians would gain Israeli citizenship or residency every decade.

Danny Brown asks: JAMES, President Reuven (Ruvi) Rivlin leaves office after serving as President of the State of Israel for seven years. In a nutshell, can you briefly explain who he was and what he achieved? I am asking for a friend.

Hello Danny and hello to your friend: Reuven Rivlin was born to Rachel and Professor Yosef Yoel Rivlin, a scholar of Arabic culture and translator of the Quran into Hebrew. As a member of Herut and a lawyer by profession, Reuven served in a range of public roles in Jerusalem and then in Israeli governments and the Knesset, including as Speaker. In 2014 / 5774, Rivlin was elected Israel’s tenth president.

In addition he has entrusted 8 candidates with forming a government over 5 elections and spent over 47 hours in consultations with Knesset parties. Rivlin also opened Beit HaNasi (the official president’s residence) for the first time in Israel’s history and has welcomed some 130,000 visitors for guided tours.

President Rivlin made extensive efforts in announcing unique pardon programmes aimed at addressing social issues in Israel. These included repairing and healing relations with Ethiopian Jews and encouraging their integration in Israeli society, rehabilitation of young people with criminal backgrounds that enlisted in the IDF, supporting those affected economically by the coronavirus pandemic and assisting women to leave prostitution. The president also expressed his uncompromising opposition to violence against women through the use of pardons.

Reuven Rivlin will now be moving out of Beit HaNasi in Jerusalem and will be replaced by Isaac Herzog.

Shoshana Scolnick asks: JAMES, Before the election, we were told especially by Avigdor Liberman that Yeshiva students would be enlisted in the army. Now that Liberman is Finance Minister, do we know how that is going?

Hello Shoshana: Your question doesn’t hint as to whether you would like to see them in the army or not. But the law that allowed the Defence Ministry to defer enlistment for chareidi students, expired last Monday. Although the state has asked for a six-month extension to pass a new law.

But this of course will not happen, because the state will give the government time to pass a new law to regulate the standing of yeshiva students who seek to defer their enlistment, until they are over the maximum age of military service.

This will be the state’s 10th request for an extension to the severely complex and divisive issue, since the High Court ruled in 2017 that blanket deferrals from enlistment were discriminatory and illegal.

When Avigdor Liberman was Defence Minister between 2016 – 2018 in the Netanyahu led government, Liberman instructed a special committee in the ministry to draw up legislation which would increase enlistment, using economic sanctions against Yeshivot that do not fill the quotas.

However one proposal put forward by chareidi coalition partners in the government was to postpone military service for Yeshiva students from the present 18-years-old to 21-years-old. Those opposed argued that the students would study for three years as many do and then join the workforce or seek higher education without enlisting.

In any case the meetings, arguments and negotiations went on and on and the state kept putting off the decision for 6 months – a bit like the American President signing a waiver form to postpone the relocation of the American Embassy from Tel Aviv to Jerusalem for 6 months, even though Congress passed the legislation in 1995.