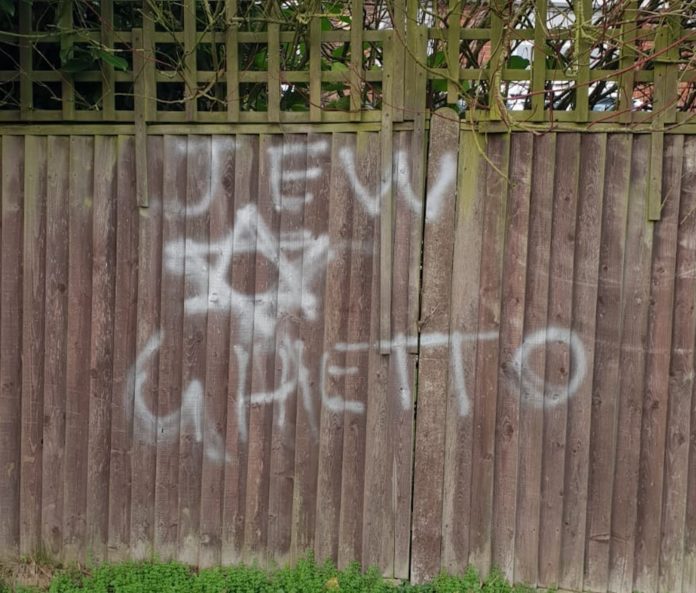 Sickening anti-Semitic graffiti was daubed on the walls of Shenley United Synagogue this week.“Jew ghetto” and a Star of David were spray-painted on Shenley Chapel, where the Hertfordshire village shul is based.

Oliver Dowden MP, who was already due to meet community leaders next week, said he was “appalled” by the incident and called on Police to pursuing the perpetrators with vigour.Rabbi Alan Garber said he was “shocked and saddened” that this should happen in Shenley.

“We are a village community that has such positive track record cross communal cohesion,respect and understanding,” he added.

Synagogue president Josh Simons added, “This has been an appalling act of anti-Semitism that has no place in our village Shenley or in our modern civil society.”

Michelle Spevick posted a picture of the graffiti on the ‘My Shenley’ Facebook page.

“As a Shenley resident and the descendant of families pretty much wiped out in the Holocaust I am sickened by this graffiti which I just drove past,” she noted.

“I doubt the person who did this feels remorse or shame but they badly need some educating.”

She added, “Having happily lived in this lovely, peaceful, warm and open community for nearly 15 years I am just so sad at this.”

Patrick Dann was not shocked.

“There is no excuse. Not age nor religion. This is a calculated act of hate. Whoever has done this needs to understand the reason for the damage and shock this has caused.”

Susan Harris had never seen such “disgusting graffiti”, whilst others offering support were devastated, shocked and angered, describing the graffiti as horrendous, vile and unacceptable.

There were calls for “zero tolerance” and an overriding view was for perpetrators to undergo Holocaust education in order to “stamp out” ignorance and bigotry.

Shenley is close to Borehamwood, Elstree and Radlett with a 4,000 population with approximately 20 per cent Jewish residents.

A Police spokesperson noted, “We received a report about graffiti on a fence in Porters Park Drive, Shenley, at 9.18am today. The fence is owned by Shenley Park Trust and they are being informed so that the graffiti can be removed.

“Officers have also been informed of two other graffiti incidents using the same phrase and symbol, which have been sprayed onto a fence at Shenley Chapel in Porters Park Drive and also onto the Chapel wall itself.

“If anyone saw anything suspicious in the area or has information that may assist the investigation they are asked to contact police by calling the non-emergency number 101, quoting ISR 137 of January 7 or report information online.”

Dave Rich, Community Security Trust spokesperson for antisemitism watchdog, said: “This vile graffiti was reported to CST this morning and it has also been reported to the Police.

“This kind of anti-Semitic language should have no place in our society and we appeal to anybody who knows who did this to come forward.”

PC Sophie Stalley, Potters Bar and Shenley Safer Neighbourhood Team, said: “We have received numerous phone calls and emails from people reporting this graffiti and understand that it has caused concern among the local community.

“After officers attended this morning they quickly arranged for the graffiti to be removed and this is being carried out as soon as possible to prevent any further upset.

“All of these incidents are being linked and enquiries are currently on-going.”