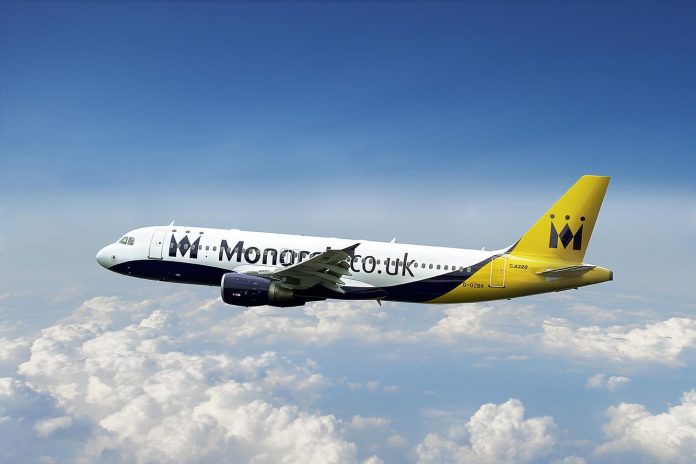 Jewish holidaymakers who have booked through Monarch Airlines to Israel over Succot will have to find new flights home after the carrier went into administration.
Hundreds of passengers have been deeply affected by the collapse of the Luton-based airline.
An estimated 100,000 British tourists have been stranded abroad and 2,100 employees are out of a job.
Travelink – the UK’s top tour operator to Israel – are organising new flights or arranging refunds for customers.
“We are taking financial responsibility for all client bookings,” said a spokesperson.
“As a travel agent and tour operator established for over 34 years, we have extensive experience and an excellent reputation which we will continue to uphold throughout any situation or crisis.
“All clients will receive a full refund on Monarch flights and holidays.”
The spokesperson added, “We are aware other agents are only giving refunds if they are covered by the Monarch Atol licence, which very few bookings are, but Travelink is refunding customers regardless out of our own pocket in many cases.
“We use El AL, British Airways and EasyJet but have used Monarch a lot.
“It hits us financially but our reputation is essential.”
Aside from passengers to Israel, Godfrey and Ida Dayan of Simcha Video, were amongst many people affected flying elsewhere with the airline.
The Londoners were set to fly to Portugal with Monarch next week.
“We heard on Sunday something might be happening and eventually was able to reschedule flights through another airline but we could have been out of pocket,” he said.
“We have insurance but it was not straightforward because seats were going fast.

“It caused us a lot of tzoris as we now have flights arriving at different airports and at diferent times.
“However, there are people a lot worse off than us stuck out on holiday so it is awful for many people.”
Monarch has enjoyed a long history of flying to Israel going back to the 1960s.
Flights were halted for a period before resuming in a blaze of publicity in December 2015.
Jeremy Segel of El Al specialists West End Travel said the low cost flight market is extremely competitive.
“It is sad for the industry that people have been caught up in it,” he explained.
“People have come in and are unsure if they will get money back. They are not clients but I feel very sorry for them, however it shows that cheap prices are not always the best.”
Several hundred Israelis travelling to the UK have been affected by the airline’s demise.
The carrier flew 10,000 passengers from Israel in August, an increase of 18% from August 2016.
Monarch’s representative in Israel, Maman Cargo Terminals and Handling, have been stunned by the announcement.
Only recently the airline approved a massive ad campaign for Israel.
A rescheduled flight left Ben Gurion Airport for the UK on Monday. But Israeli passengers have been hit financially as they have to arrange return flights.
No refunds will be given for flights already booked.
For the next two weeks those in Israel, on a ATOL bonded trip or self-booked holiday, the government will bring home after which time only those covered by the industry scheme (ATOL) will be looked after.
The Jewish Weekly’s own travel news columnist Malcolm Ginsberg, of Business Travel New pointed out how other airlines are offering to help with Wizz coming in with a £120 return fare to Tel Aviv and easyJet letting people know that it is recruiting.
Civil Aviation Authority (CAA) chief executive Andrew Haines said the decision to stop trading would be “very distressing for all of its customers and employees,”
The CAA has moved quickly to keep customers informed.
“Monarch customers abroad, due to fly back to the UK over the next fortnight will be brought back at no cost to them,” said a CAA representative. “They will be brought back as near as possible – probably within a couple of hours – of their original scheduled flight.”
KPMG have been appointed administrators to Monarch Airlines Limited and Monarch Travel Group Limited. Monarch Engineering Ltd, a separate company, continues to trade.