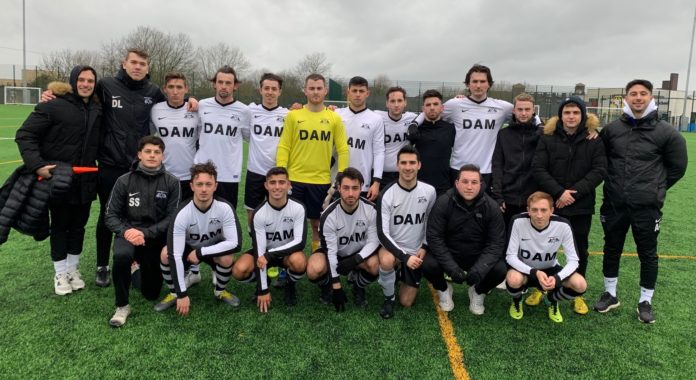 The Maccabi GB Southern Football League 2019/20 season has been suspended until further notice due to the coronavirus pandemic.

The management took the decision, which was expected, at a meeting on Monday night.

“We will keep a constant watch on developments and advise you of updates,” noted chairman David Wolff in a statement. “We obviously can’t say when or even if there will be a resumption of play for this season.”

the Government’s announcement for people to avoid social contact and gatherings where possible.

“We are now advising that all grassroots football in England is postponed for the foreseeable future,” they said. “Throughout this period, we have taken Government advice with the priority being the health and wellbeing of all. We will continue to work closely with the grassroots game during this time.

“We are in regular communication with the Government and the situation within English football at all levels remains under regular review. Further updates will follow as needed.”

The Manchester Jewish Soccer League has also shut down.

North London Raiders clinched the Division One championship with a 5-1 win against Hertswood Vale in what could be the final fixtures of the season last Sunday.

Raiders struck four goals late on to secure the win on a red-letter day for the club.

Raiders have one match remaining.

The final result for Raiders did not look on when Vale opened the scoring on 43 minutes in an open first half.  Dan Reuben tapped home a pinpoint cross by Josh Gorb from a free kick.

Raiders are champions because they are the most clinical team in the division.

Boasting a record of 10 wins, a draw and just one defeat prior to this encounter, co-manager Gideon Gale’s charges hit back with a goal of the season contender by Nathan, thumping home the equaliser into the top corner of the net from 30 yards on the stroke of half time.

Both teams created chances after the break. With the game up for grabs, Raiders edged ahead for a second time from a Nathan penalty in the 83rd minute.

As the visitors pushed for an equaliser, Raiders broke Galaxy’s resolve with three further goals.

Bloom slotted home a penalty, Nathan side-footed number four into the bottom corner for his hat-trick then completed the scoring with a left-foot finish following a solo effort.

“I couldn’t be prouder of the boys,” said Raiders co-manager Gideon Gale. “True grit and determination got us through. The score doesn’t reflect the way the game flowed, but credit to Vale who made it difficult for us.”

Gale added, “Focusing on the full season, it’s been a terrific achievement from the lads. No team has got close to us. We haven’t conceded a goal in open play since October, have two of the top scorers in Jewish football and exceptional midfield combinations tie it all together.”

Raiders, who picked up a pre-season trophy, have two semi-finals to look forward to against Oakwood in the Cyril Anekstein Trophy and Vale in the David Woolff Division One Cup.

Both though are now in serious doubt.

However, commenting on the achievement before Monday’s announcement, Gale said, “‘Double’ winners sounds great but quadruple winners sounds even better.

“It’s now about building a team good enough to challenge the top two in the Premier next season, which we know were more than capable of doing.”

Vale boss Jacob Emmanuel praised Raiders for winning the title but was downbeat at the result.

“Well done to Raiders for a deserved title win,” he said. “They’ve been fantastic all season and will do well in the Premier next season.

“I’m disappointed we’ve come off the pitch with an undeserved loss. Had it not been for an unfortunate penalty decision, I would’ve backed us to grab a draw with both teams looking for chances on the break. We were naive at the end and feel we’ve let ourselves down with the scoreline. It was hard for the boys when they deserved a result from today’s performance. But it’s a learning curve for us and we’ll come back stronger from it.”

He added, “The score really doesn’t tell the full story. I’m disappointed we collapsed in the last few minutes, but I’m proud of a strong performance.

“I would’ve liked to have seen us take a deserved lead into the half time break but there are moments in football where there isn’t really much you can do. Nathan’s equaliser is the best goal we’ve conceded all season. There was nothing anyone could have done about that strike.”

Borussia Barnet moved to within a win of league leaders FC Team in Division Two after routing West Hamdillah 11-1.

Borussia are level on goal difference with FC and have a match in hand if the season restarts. Ten points from the final four games would secure the title.

Ollie Hart, Oron Sheldon, Danny Shina and Mitchell Gerber all bagged braces. Adam Bowman, Joe Woolf and Sam Lipton also hit the target against the Hamdillah who have no registered a point.

Borussia joint-manager Brad Papier, commenting before the season curtailment, noted, “We needed to make up the goal difference to put things in our favour and we’ve done just that. We’re in a fantastic position to go on and win the title.”

In cup action, Jewdinese goalkeeper Ben Halmer was the hero against North London Galaxy in the last of the David Wolff Division One Cup quarterfinals.

James Ross opened the scoring for the hosts before Tyler Smith sent the match to a shootout.

Halmer, superb during the game, saved two penalties in the shootout before slotting home the winning penalty kick.

“We dug in deep, limited Galaxy to playing in front of us and defended tremendously. What can I say about Halmer, he single-handedly won us the game. Ben was outstanding and has been all season. “He deserves this, I’m so happy for him. Onto the semis.”