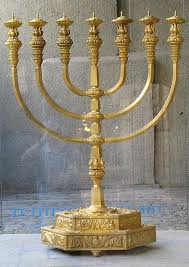 The Jewish people are called upon to contribute thirteen materials—gold, silver and copper; blue-, purple- and red-dyed wool; flax, goat hair, animal skins, wood, olive oil, spices and gems—out of which, Hashem says to Moshe, “They shall make for Me a Sanctuary, and I shall dwell amongst them.”
On the summit of Har Sinai, Moshe is given detailed instructions on how to construct this dwelling for Hashem so that it could be readily dismantled, transported and reassembled as the people journeyed in the desert. This sanctuary was known as the Mishkan, or Tabernacle in English, and was in essence the world’s first ever Synagogue.
In the Mishkan’s Kodesh Hakedoshim (The inner chamber), behind an artistically woven curtain, was the Aron (Ark) containing the Luchot (Tablets of Testimony) engraved with the Aseret Hadibrot (Ten Commandments). On the Aron’s cover stood the two winged Cherubim (Cherubs) made out of pure gold. In the Kodesh (The outer chamber) stood the seven-branched Menorah  and the Shulchan (Table), upon which the “showbread” was arranged.
The Mishkan’s three walls were fitted together from 48 upright wooden boards, each of which was overlaid with gold and held up by a pair of silver foundation sockets. The roof was formed of three layers of coverings:
1. Tapestries of multicolored wool and linen
2. A covering made of goat hair
3. A covering of ram and Tachash skins.
Across the front of the Sanctuary was an embroidered screen held up by five posts.
Surrounding the Mishkan was the Mizbeach (The Altar). This was an enclosure of linen hangings, supported by 60 wooden posts with silver hooks and trimmings, and reinforced by copper stakes.

What was the Tachash?
The Tachash was an animal that existed only for the forty years that the Jews were in the desert. Hashem created this animal exclusively for the needs of the Mishkan. Many commentators describe this animal as a beautiful multi-coloured animal with one horn, which is where the legend of the unicorn was born.
Are you good at art? Draw a picture of what you think the Tachash looked like and submit it on our website in our youth weekly section. We will feature the best drawing in our next issue.