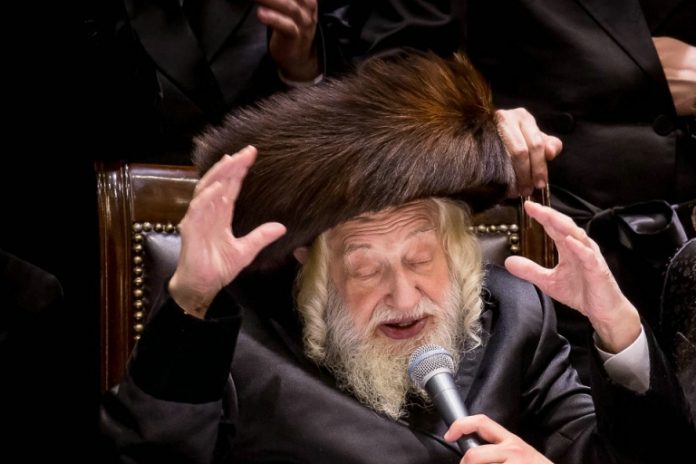 World Jewry has mourned the death of the Skulener Rebbe on Monday.

One of the last vestiges of the old guard of great rabbinic leaders in the world, 95-year-old Hagaon HaRav Yisroel Avrohom Portugal Z”tzl passed away at John Hopkins University Hospital in Baltimore.

Tens of thousands of chassidim attended the funeral service at the Skulener Synagogue prior to his burial at the Viznitz/Vishnitzer cemetery in Monsey.

The curtain was removed from the Aron Kodesh at the Skulener shul as a sign of mourning,

Live updates and videos of the funeral were posted on social media for those unable to attend.

Transportation was organised for mourners to the cemetery, two scheduled eulogies took place.

Street closures from 52nd to 61st Street, and 12th to 16th Avenue, were in force from early Tuesday in preparation with extensive parking restrictions.

The entrance to the Skulener Synagogue was closed for the duration of the funeral, whilst the Blueberry Hill neighbourhood was in lock-down.

After the eulogy at the shul, the coffin was carried through the NY streets and placed onto a “Sprinter” van. Thousands followed behind on route to the cemetery.

An NYPD officer struck by the vehicle carrying the coffin of the Skulener Rebbe was transported to Lutheran Hospital after Hatzolah, FDNY and EMS responded.

A female officer also required treatment after being struck by a drone, which hit a building.

A man flying the drone was reportedly arrested.

Born in 1898, the Skulener Rebbe was the son of Hagaon HaRav Eliezer Zusia Portugal Z”tzl, who founded the Skulener Chassidus.

Rebbe Eliezer was 18 when his father passed away and he became Rav of Skulen (Sculeni), serving for 20 years.

Establishing yeshivas, he was renowned for his manner and melodic voice, composing many songs.

Both a father and mother to thousands of Holocaust orphans who still call him ‘father’.

Imprisoned with his son in 1959, both were released after intervention from United Nations Secretary-General Dag Hammarskjöld and immediately moved to the United States in 1960.