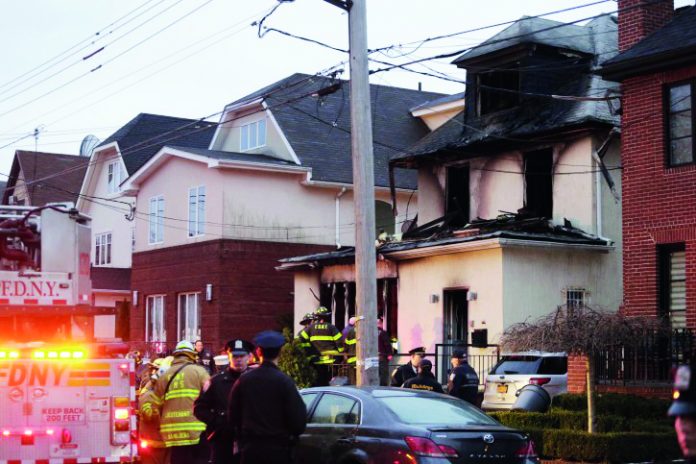 The Jewish community of Flatbush in Brooklyn is mourning the deaths of three children and their mother following a fire in their home on Monday.
Fire Marshalls confirmed within 24 hours that an ‘unattended’ menorah sparked the Chanukah inferno which ripped through a Sheepshead Bay home in the early hours of the morning.
Firemen were reportedly at the scene within three minutes of a 911 call from neighbours by which time the three-story home was engulfed in flames.
“It was early morning, everyone in the home was asleep,” Fire commissioner Daniel Nigro reported the Yeshiva World News.(YWN)
The fire “got a good start before a neighbour noticed and called us.
“What they were confronted with is fire meeting them at the front door. So the units, knowing there were people in the home, pushed in very aggressively.”
Nigro confirmed that nine people – the parents, six children and a cousin, were in the house.
“This is a terrible tragedy, not just for this community, but for our city,” Nigro added.
“This time of year, when these things strike, it just tears your heart out for the family.
“Our city grieves with this family today.”
Thousands of mourners packed the streets of East Flatbush for a scheduled funeral in the evening.
SUVs carrying the bodies curtailed the procession outside Beit Knesset Sheves Achim.
The bodies were identified as 40-year-old Aliza Azan and children Moshe 11, Yitzchak 7, and Henrietta 3. They were taken to JFK Airport where a plane was waiting to fly them to Israel for burial.
“I just can’t believe it,” a family friend, Jamhila Ruben, told the New York Post.
The heroic actions of the father, Yosef Azan, 45, was described at a press conference as he saved two of his teenage children, Shalit and Daniel.
All three are in a critical condition at Staten Island Burn Centre.The community has been urged to pray for them.
Yosef attempted to re-enter his home but failed to do so due to the flames.
Smoke alarms saved the lives of another teenage son and cousin on the first floor.
Five firefighters were reported to have minor injuries.
YWN reported that sources confirmed that among the deceased, some were classmates of the Sassoon children at Yeshivat Ateret Torah killed in another fire in Flatbush in 2015.
In that fire tragedy, seven children in one family perished. Rabbi Sasoon, the father of the victims in the 2015 fire, wrote a comforting letter to Mr Yosef Azan.
There were other Chanukah incidents around the world.
Two fires caused damage to homes in Kiryat Bialik and Ramat Beit Shemesh in Israel on the first night of the festival.
According to YWN, a menorah was not on a stable surface in one of the incidents.
No one was reported injured in either incident.
Meanwhile, Greater Manchester Fire and Rescue Service warned families about the danger of lit candles after receiving two callouts after Shabbat.
In a tweet, the service warned, “Candle safety alert. Don’t leave them unattended – particularly if you’re celebrating Hanukkah this weekend. Our crews have attended two fires today caused by unattended menorah candles.”