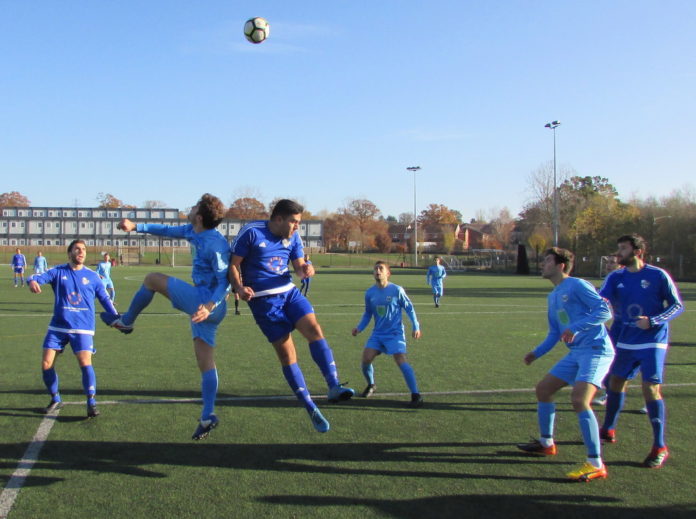 Premier League pacesetters Hendon United Sports moved six points clear of Faithfold A after a 3-0 top of the table victory.

HMH and Los Camden A lost ground at the top following a goalless draw.

Hendon’s clash at home to third-placed Oakwood A on Sunday (10am) takes on extra significance as victory for Jordan Sapler’s league leaders or Daniel Kristall’s charges, who have two games in hand on Hendon, could prove significant in the title race.

In Division One, Redbridge Jewish Care A and Fairlop FC drew 1-1 in another top of the table clash.

And in Division Two, Hertswood Vale and Faithfold B picked up wins in another fascinating title battle.

Hendon took the lead against injury-hit Faithfold A before half time and sealing the win with two late goals as the hosts pushed for an equaliser.

Jonti Aremband, Chain Korman and Rocky Spitzer scored the Hendon goals.
“It’s a shame Faithfold were once again supposedly understrength for a game against us,” said Sapler.

“It always seems to happen when they play us. I can’t understand why a top of the table clash would see so many players pull out when they are available for other games, nonetheless we play what’s in front of us and it was a fairly routine win that extends the lead at the top.”

Faithfold player-manager Avi Markiewicz, who thought he might have to postpone the fixture due to injuries, was unhappy with Hendon’s second goal as he felt Faithfold’s ‘keeper was impeded by a Hendon player in an offside position. But he felt the result was just.

“They were worth the win and played well,” Markiewicz said.

“We worked really hard but were up against it from the start. We matched the best team in Jewish football in game plan for 85 minutes and the lads did themselves proud.”

Los Camden A and HMH were both hampered by injuries but shared the spoils in a hard-fought encounter at Hertswood Academy.

Nevertheless, Camden grew into the first half as defences cancelled each other.

The hosts gained momentum, with Oli Sade going close from 20 yards and Guy Fenton hitting a post. Ethan Krell had a goal disallowed late on for offside as the game ended in stalemate.

Camden boss Stirling Kay was full of praise for his battling team.

“We had notable absentees but the lads stuck in and defended solidly,” he said.

“With the chances we created, especially in the second half, I’m upset we couldn’t get a late winner but take nothing away from HMH who had chances of their own and are tough competition.

“We remain unbeaten since the opening day of the season and I’m excited to get the lads in for training to make sure we can continue our momentum.”

Kay added, “Our goalkeeper, Steven Murad, had an excellent game. His handling, presence and distribution were brilliant. Right back Matt Perlman played his first game for the A’s and stepped up with an excellent performance. He is a player in fine form, his tough tackling, strong running and clever play was a vital part of our clean sheet. Elliot Moslawy slotted into left back from central midfield after Tiano’s injury and showed his class, maturity and versatility again.”

He commented, “Guy Fenton had another strong performance. His defensive cover ensured a clean sheet. And Sacha Nusenbaum was immense, he covered every blade and thrived with the extra responsibility.”

As for referee, Andy Myerson, Kay felt he had an excellent game.

“Andy deserves credit for getting every decision correct, when at times players and touchline bystanders were attempting to trick him,” he said. “Praising referees is a rare sight in this league but Andy showed why he is so highly respected as a top referee in the league.”

Redbridge Jewish Care A came from behind to share the points with Fairlop FC in Division One.
But the big talking point came when Redbridge’s Nate Kashket smashed home a last-minute free kick only for referee David Lazurus to disallow out as it was taken early.

“Having a winner ruled out in a big game is hard to deal with, but this is football,” said Redbridge manager Sam Rank. “You must play to the referee’s whistle and this is a lesson Nate will learn.”
This much-hyped game was a cagey, tense affair, which disappointed a 100-plus crowd.
Fairlop bossed the first half, which had one clear cut chance when Dean Caplin made a good save from Harrison Grant.
Against the run of play, Brad Gayer struck from eight yards, only for Redbridge to equalise minutes later when Dean Ben Yosef knocked in a rebound after James Berkley headed a Kashket corner on to a post.
“A draw was a fair result,” commented Rank. “We could have nicked it in the end, but that is football.

“The big disappointing point from a footballing point of view was the lack of it from both sides, especially as both sides can play good football and in front of a big crowd.
“The draw today means the return fixture will end up being a title game, and with a few returning this will give us the edge and title.
“The attitude shown and displayed by the boys was spot on. It will keep us where we want to be in our objective of winning the title.”
Fairlop boss Aaron Dias described the match as a “great advert” for Jewish football as the teams went toe-to-toe for 90 minutes.

“We dominated the game,” he said. “Our goalkeeper didn’t have a save to make, we hit a post and tested their keeper on several occasions.

“The fact that our boys came off with their heads down shows how far we’ve come. Were disappointed with a draw against our closest challengers.”

Dias added, “Redbridge know they are lucky to come away with a draw, had we been more clinical in the first half, it would have been a cricket score.

“Next time we play them won’t matter as we will have won the league by then. I’m more confident than ever that we will get the ‘derby’ win we deserved. Thanks also to our loyal fans that came. We’ll keep fighting and working towards our targets of league and cup success.”

Josh Shack and Josh Cohen scored for North London Galaxy who closed in on the leaders with a 2-0 win at North London Raiders A.

Galaxy dominated possession and opened the scoring when Jack Mattey created space for Shack to fire home his first goal for the club.

Cohen slotted home the second with a left foot strike to seal the points.

“It was men against boys,” said player-manager Luke Lewis.

“We outclassed them from first to last minute. They couldn’t handle our football today, we were disappointed to have not beaten them by more.”

Elsewhere in the league, Jewdinese climbed the table with a 2-1 win at Oakwood B, whilst Los Camden B moved out of the bottom-two after winning a five-goal thriller against Bayern Mincha 3-2.

Division Two leaders Hertswood Vale missed a second minute penalty then came back from 2-0 down to win 4-2 and record a huge win against promotion chasing SPEC.

A brace from James Millet and Ben Mandell keeps Vale two points clear at the top of the table.

In an extraordinary start, Millet saw his penalty saved by the Spec ‘keeper then had a goal disallowed after the referee initially gave it.

SPEC took control and opened the scoring on 23 minutes through Zach Neiman but failed to double the lead when Adam Zaidman made his third penalty save of the season.
The visitors did however go two-up through Josh Green only for Millet to set up Mandel just before half time.
Millet equalised two minutes into the second half from a corner but SPEC continued to dominate possession. With the game looking set for a draw, Adrian Leibovitch found Millet, who curled home from 25 yards into the top corner.

SPEC had an equaliser chalked off for offside before Mandel struck his eighth goal in the last five games to settle an enthralling encounter.
“It was another cracking game against SPEC, but unlike the previous match, this was a much fiery encounter,” said Vale boss Jacob Emanuel.” Once again, we’ve had to come from behind to win in the league, it makes for a better game, but I’d rather the boys won 1-0 every week!”
He added, “Zaidman probably has his best performance of the season. Big saves at key moments kept us in the game, his penalty save was a crucial point in the match. Adam marshalled the back four and was a huge reason for our comeback. He is the best ‘keeper in our division. And Ashley Hirschberger moved into centre of defence in Alex Trup’s absence and was key in our win. Ashley was a rock at the back, winning challenges and headers all over the park.”
As for the partnership of Millet and Mandel who have bagged 21 goals in 10 games this season,” he commented, “It’s hard to ignore these two at the moment, a dynamic duo that are linking up all over the park. They linked up incredibly for the first goal at a crucial time to give us a chance of coming back into the match.”

SPEC player-manager Ricky Lawrence added, “A really good game but one that again we’ve come away empty handed from.

“In fairness, their third goal was a great finish and worthy of winning any game but the final goal came as we pushed for an equaliser.”

Faithfold B remain two points adrift of Vale, having played one more game, after a comfortable 4-1 win over North London Raiders Masters.
Motty Korman scored twice for the victors, Lollu Hibbert and an own goal completed the scoring.
“I’m very happy with the points, after a disappointing few weeks,” said Faithfold boss Doron Shooter. “The game was played at a very high intensity until we scored our third goal, which took the sting out of the match.”

FC Team came out on top of a mid-table battle 5-1 at Scrabble B.
A Josh Morris brace together with goals from player-manager Mitch Young, Richard Salmon and Connor Perl earned the points.

Lloyd Becker scored for the hosts.

“We played the game with a lot of injured players but still had enough quality to score five goals and outclass them after they put in a strong first half performance,” commented Young.

“We are moving up the table and look forward to keep this winning run going.”

Manager Simon Linden was pleased to get the points and is now looking for his team to get a run going.

“We need to move our way up the table quickly, next week is all about revenge against Scrabble who beat us last time out,” he said.

David Clements scored for the hosts.

The clash between Redbridge Jewish Care B and Mill Hill Dons was postponed.