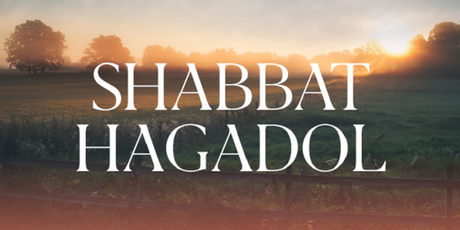 Shabbat Hagadol plays a colorful role in the rich heritage of the Pesach holiday. At the heart of the Shabbat Hagadol lore lies a distinctive shiur or sermon geared toward preparing for the upcoming holiday. In fact, some have even suggested that actual label of Shabbat Hagadol (which may be construed as the “long” Shabbat) stems from the outsized length of Shabbat due to the lengthy “featured” shiur or lecture. Without question by Shabbat Hagadol, Pesach is already in the air – as the additional demands of shabbat meals vie with the desire to create a chametz free environment.

Historically, the Shabbat prior to the actual Exodus was a noteworthy milestone. As the Jews departed Egypt on a Thursday-the 15th of Nissan- the prior Shabbat was the 10th of Nissan. On this Shabbat we were instructed to purchase the pascal offering and launch the final stage of our redemption. This dramatic act of insubordination outwardly defying their master’s authority signaled the homestretch of the redemptive process. Even when Shabbat Hagadol doesn’t coincide with the 10th day of Nissan, this distinguished Shabbat recalls that historical episode and our fortitude. The heroism of that Shabbat and the euphoria of the ensuing departure on Thursday were inseparable.

This bridge between Shabbat Hagadol and Pesach is essential even without the historical connection of the year of the actual Exodus. Stretching Pesach to the Shabbat before and creating one continuous event, highlights many of the shared features, as well as the important differences between Shabbat and Pesach.

Shabbat centers our belief in G-d based upon His creation of our universe. This belief lies at core of our very reality and the basis of this belief is visceral and innate. However, Shabbat by invoking creation creates a theological platform which is completely unprovable. Skeptics have, and will continue to, suggest alternate narratives to account for our world and its evolution. By contrast, Pesach fastens our belief to an actual series of supernatural events which are verifiable and which were witnessed by actual human beings who transmitted those events throughout the generations. By recounting the events of Pesach, we help construct the remarkable platform of Jewish belief- we retell a story about events which serve as the basis of our belief system. The bridge between Shabbat and Pesach allows us to merge the two theological cornerstones – of Creation and of Exodus- into one integrated platform.

Shabbat experience transmits a universal message. All creatures were formed by G-d and His decision to halt creation on the seventh day influenced the entire universe. Resting in His image provides an opportunity for all Mankind to trace their very existence back to that original creation. In fact, both Christianity and Islam have institutionalized a day of ‘rest’ to enable this identification with G-d and the origins of humanity. Even though Shabbat entails a uniquely Jewish experience (and a Gentile isn’t allowed to maintain halachik Shabbat on Saturday) the day transmits a universal tone.

By contrast, Pesach marks our birth as a nation. We were forged through the 210-year struggle of slavery and emerged as a nation still loyal to a mission which had been delivered hundreds of years earlier. Though the elemental messages of Pesach are universal, the actual experience was limited to the Jewish nation. This moment marks the genesis of our nationhood, the start of an odyssey unparalleled in the anthropological annals of human experience. Reciting Shir Hashirim over Pesach (some actually recite it after the seder) underscores this night as the launch of Jewish history. In our modern context, as we have reclaimed certain lost aspects of nationhood, Pesach reverberates with added historical resonance.

Of course, for a Jew, universalism and nationalism are integrated. We were chosen for universal responsibility and without attending to that responsibility our chosenness is hollow. Likewise without appreciating our unique calling and acknowledging our unique national identity, we fail an entire planet which depends upon our mission. The transition from Shabbat Hagadol to Pesach allows us to incorporate these twin values.

3) A Relationship with G-d

Unquestionably, G-d created all reality and continues to interact with the universe. An 18th century German thinker named Wilhelm Leibnitz popularized the theory of a “clockwork universe” in which G-d created the world but wound it up like a “clock” allowing it to run under its own rules and mechanics. We obviously reject this and recognize the constant involvement and supervision of G-d in our world. Without question though, this involvement is veiled by nature which does seem- to the non-religious eye – to operate under its own engines. Pesach reinforces a brave notion – that G-d interacts with His creatures in a more direct and overt fashion. Pesach marks the launch of religious history – at least at a national level. G-d built a relationship with human beings and, additionally, delivered direct commandments and overt moral guidance. Although this relationship began with our ancestors, it crested on the night pf Pesach. We weren’t only rescued from Egypt but were mandated with mitzvot and expectations whose performance helps us interface directly with G-d. If the Shabbat experience can, for some, present G-d as mighty but distant, the Pesach experience draws G-d into the human realm.

The world G-d created isn’t an “amoral” universe or a morally neutral landscape of science and natural laws. The gemara in Eiruvin (103) claims that we can learn privacy from viewing cats and industry from an ant colony. A thorough study of G-d’s world can yield endless moral lessons. However, these lessons are imprecise and, for most, elusive. Celebrating creation on Shabbat attunes us to the root of our life as well as to the role of G-d in our very existence. However, the world around us cannot fully provide the lessons and guidance so necessary for human prosperity. The Exodus from Egypt changed the fabric of the religious experience. The Exodus itself exemplified basic cardinal themes such as the value of human freedom, the criminality of oppression and slavery, the notion that gross crimes must be punishable, the power of faith, the notion that the militarily weak can defeat superior forces and many other core values which are vital for human civilization. Additionally, the year-long parade of miracles in Egypt illustrated basic ideals of monotheism. Of course, 7 weeks after the actual Exodus G-d would provide Man with His written word and specific instructions for a life redeemed. The transition from Shabbat to Pesach marks the evolution from a world in which guidance for human experience is vague, into a world in which G-d overtly guides human prosperity.

Shabbat Hagadol effectively stretches the Pesach experience back a few days to the prior Shabbat. Historically, the Shabbat before Pesach was the launching pad for the final clinching redemption. Experientially, this bridge between Shabbat and Pesach allows for the integration of the complementary themes of Shabbat and Pesach. Together this tandem forms a sturdy basis for faith and belief.