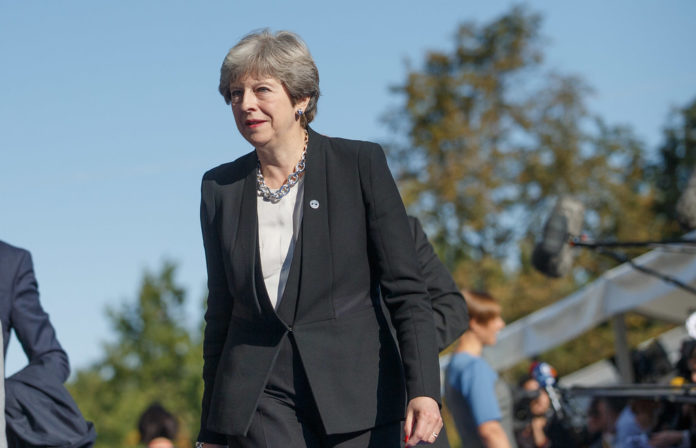 Mrs May was clearly emotional in her resignation statement announcing she would step down as leader of the Conservative and Unionist Party on June 7, and concluding, broke down when describing her tenure as “the honour of my life to serve the country that I love”.

Recalling a discussion with Maidenhead constituent Sir Nicholas Winton, who organised the rescue of hundreds of children, most Jewish, from Nazi-occupied Europe on the Kindertransport, Mrs May he told her that “compromise is not a dirty word”.

Finding a path through Brexit eventually proved insurmountable, resulting in the start of a leadership campaign to appoint a new Prime Minister.

Board of Deputies president, Marie van de Zyl, thanked Mrs May for being a “true friend” to the Jewish community during her time in office.

Over a list of achievements, she added, “Her Government has adopted the IHRA definition of anti-emitism, marked the Balfour Centenary with pride, banned terror organisation Hezballah, increased security funding to the CST so that our schools, community centres and places of worship are protected, opposed anti-Israel bias at the UN Human Rights Council, supported our Jewish schools through resolving issues around Gift Aid, drove forward plans for a Holocaust memorial beside Parliament and signed a trade agreement with Israel for trade post-Brexit.

“She said ‘without its Jews, Britain would not be Britain’ and held up a sign saying “Je Suis Juif”.

“We will always appreciate her friendship and support.”

JLC Chair Jonathan Goldstein thanked the Prime Minister for her service to the country and long-term support for the Jewish community.

“From her action against anti-Semitism as Home Secretary to her Government’s protection of faith schools, the proscription of Hezballah and the strengthening of ties with Israel, the Prime Minister has been a true friend.”

The Conservative Friends of Israel thanked Mrs May for her “steadfast” and “invaluable” support of Israel, for leadership in strengthening the UK-Israel relationship and fighting anti-Jewish racism.

CFI’s Parliamentary Chairmen and Directors added in a statement that she had been a “steadfast supporter of the State of Israel and champion of the UK’s Jewish community.

“Theresa May has fiercely fought anti-Jewish racism and it is thanks to her that the community has received record levels of financial support for its security at this difficult time,” they noted.

“Under her leadership, the UK-Israel relationship has gone from strength to strength with record bilateral trade, the much anticipated first ever official visit to Israel by a member of the Royal Family took place, and the Hezbollah terror group was proscribed.

“CFI would like to thank her for her invaluable support.”

Chief Rabbi Ephraim Mirvis wrote on social media that the Jewish community would look back with “deep gratitude” on the premiership of Theresa May for her friendship, commitment to challenging antis-Semitism, Holocaust memorial and physical protection of the community.

He added, “She has always been and will forever remain a true ‘ohevet Yisrael’.”